“Listen, here’s the thing. If you can’t spot the sucker in your first half hour at the table, then you are the sucker. Guys around here will tell ya, you play for a living, it’s like any other job. You don’t gamble, you grind it out. Your goal is to win one big bet an hour, that’s it. Get your money in when you have the best of it. Protect it when you don’t. Don’t give anything away. That’s how I paid my way through half of law school. A true grinder. You see, I learned how to win a little at a time. But finally I’ve learned this: if you’re too careful, your whole life can become a ****in’ grind.”
– Mike McDermott, Rounders

Do you ever feel like Mike? Do you feel like your entire life has become a grind? You play by the Man’s rules and hope to be rewarded for your loyalty, but what do you get? Just enough to get by. Don’t you deserve better?

In Magic, we are oppressed by the Man(a). Why should we only get one land per turn? Why can’t we have four mana on turn two? Why not six on turn three?

And come to think of it, why do we only get one card per turn? Why can’t we have two, or how about four? The rules of Magic oppress us, and I think we deserve better.

One way is to ignore the rules altogether. Alex Bertoncini pioneered the Super Explore in 2011. He definitely stuck it to the Man(a), but what about those of us who actually want to play the game?

But alas, after only a bite of no-rules Magic, we were cast out! Gone are days when the rules were meant to be broken, and over the years, cards have grown fairer. Luckily, we have Vintage and Cube where we can still freely exercise our freedom to protest the rules of Magic. Here’s a deck in full protest mode from my namesake MTGO cube:

Unfortunately, most of the time the Man forces us to play formats without Black Lotus and Mana Crypt. Fun’s over. It’s time to pack it in, boys. Or is it?

What did this deck do? Go HAM.

Let’s play all the lands, draw all the cards, and make all the mana as early as turn two! More than anything else, Eggs embodied a philosophy of brokenness. Once we’re done breaking all the rules, I guess we’ll win somehow, but that’s an afterthought. It was high octane gasoline.

But some didn’t like Eggs. They thought it was unfair that Eggs players got to break all the rules while everyone else was trying to make an honest living. Brian Kibler championed fair Magic when he chanted “honest man, honest creatures” in his feature match against Eggs. Did I feel guilty for playing a deck that was so unfair?

In the words of Canada Bill Jones: “It’s immoral to let a sucker keep his money.”

Unfortunately the Man struck again and banned the breakfast-themed menace. It was fun while it lasted. Back to the grind. Luckily, Khans of Tarkir contains a few “mistakes” we can use to continue to protest the rules of Magic.

Now this is what I’m talking about! We get to savagely break the one-card-per turn-rule and make basically infinite mana in the process. This deck frees us from the grind of fair Magic, and allows us to feel the excitement that we deserve. Let’s enjoy it while it lasts! Plus look at that sweet sideboard plan. Spicy.

Even in fair decks, the more you exploit interactions that break the structure of Magic, the more powerful your deck will be.

Although Mono-Blue Devotion was primarily a fair deck, it was enhanced by the value that Bident of Thassa can provide, as well as oceans of Nykthos mana. Aside from exploiting interactions that break the fundamental rules of Magic, Thassa and Master of Waves feel like they break the rules of how powerful creatures should be. This is a new school type of power level. Recently Wizards has been pushing creatures and some new decks just play a bunch of powerful creatures. This is an increasingly effective strategy. But is Standard doomed to be one long, midrange grind now?

Matt Nass is a Genius, AKA Astronomer Ascendancy

Meletis Astronomer might be the push that Ascendancy combo needed to become competitive in Standard. It is so, so good in this deck. If you can stick an Astronomer, assembling the rest of the combo is virtually guaranteed. I was recently able to combo through two Destructive Revelry in one turn by finding and casting three Ascendancy in a row thanks to our stargazing friend. 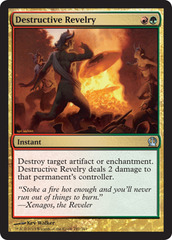 In particular, Astonomer Ascndancy crushes the popular Whip of Erebos decks. If you enjoy doing broken things, I encourage you to give it a shot! Josh Silvestri wrote an article about the deck here.

An aside on the name—when Sam Pardee messaged me this deck, it was called “Matt Nass is a Genius.txt” which I’m pretty sure was Matt’s original title. Although I might like to rename it Astronomer Ascendancy, I will understand if Matt wants to keep the original name.

Exploiting cards that break the rules lets you play an entirely different and more powerful game than your opponent. Alternatively, you can just jam all the “unfair” mythics together like Wizards wants and sledgehammer your way to victory, but I hold out hope that we can find ways to stick it to the power creep and play some good old-fashioned broken Magic.

Thanks for reading,
Nathan

P.S.
I’m moving my stream to start a couple hours earlier. Catch me from 6 p.m. PST on Thursdays at twitch.tv/channelfireball

Nathan Holiday was the second player to win a major Modern event with Eggs over the last Modern season, taking down Grand Prix San Diego in the spring of 2013. Nathan has played Magic since age eleven, when he switched from weekly chess lessons to weekly FNM. His favorite format is triple Innistrad draft.