Yuuki Ichikawa recently won a GP with this list:

It’s pretty close to the normal Abzan Megamorph Control decks, except it has four Satyr Wayfinders in it. I think those are wonderful additions and should be adopted by everyone who plays this deck.

When I originally built Den Protector/Deathmist Raptor decks to test for the PT, every single one of them had 4 Satyr Wayfinders. In fact, I would start with those 12 cards—they were the engine. The Wayfinders were eventually deemed not good enough and abandoned, but I never stopped liking them. I think now is the time for their comeback.

Wayfinder in this deck does three main things. The first is that it enables Deathmist Raptor, Den Protector and Tasigurs. If you mill Raptor it’s often better than drawing a card, and it increases the number of options you have with Den Protector. Playing Tasigur on turn 3 (or on turns 4/5 with another spell) is also very good, and Wayfinder lets you do that.

The second is that it serves as a blocker against Mono-Red. This is super important, because your deck is clunky and often starts playing the game at 3 mana, so having something to do on turn 2 that trades for Foundry Street Denizen is a huge game. It’s no Fleecemane Lion in this regard, but it’s still good.

The third function is to serve as fodder for edicts, which wasn’t very important before but is now very relevant. As Esper became more popular, the metagame adjusted to combat it—even Esper decks themselves run four Foul-Tongue Invocations sometimes. If you add that to the lack of Silumgar, the Drifting Death, then Satyr Wayfinder becomes an amazing resource that will eventually demand a card one way or another.

Having Wayfinders in your deck does come at a cost, of course—revealing one to Courser of Kruphix when you need a land is the main culprit—but that’s usually balanced by changing the top of your library by playing Wayfinder when you have Courser out. Sometimes you need a land now and you draw Wayfinder when you don’t have 2 mana to spare. Sometimes you flat-out miss on Wayfinder and then you’re playing a 1/1 for 2. Overall, however, the cost is not very high.

Despite all of these issues that will happen from time to time, I think Wayfinder’s pros more than outweigh his cons right now. I don’t think you necessarily need to play 4—2 or 3 is certainly acceptable—but I think you should definitely play some number of them in all your Abzan Control decks that have Den Protectors and Raptors. 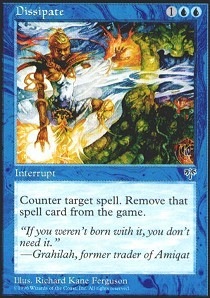 One question I often get asked and forgot to address in my latest Esper article is whether it’s OK to play Dissipate instead of Dissolve in the Esper deck. Dissolve is certainly the norm, but there have been enough people playing (and advocating) Dissipate that I feel it’s worth examining.

In a vacuum, Dissolve is clearly the more powerful card, since its effect is relevant about half the time (the other half you’d just draw that card anyway and nothing would change), whereas Dissipate’s effect is relevant in way fewer situations. The argument is that, when Dissipate is relevant, it’s much more relevant, so it’s worth those times where it’s not good (so basically you’re choosing between a 0 and a 10 as opposed to a card that’s always a 5).

What do you want to Dissipate in Standard? The first thing card that comes to mind is Deathmist Raptor. This is certainly a good target and, if my opponent plays a Deathmist, I’d rather be able to counter it forever. The next is a Den Protector target. This is less relevant, because they will find targets at some point anyway. Then, there are Dragons that you can potentially Haven of the Spirit Dragon back. This can be relevant in the short term, but in the long term they will find Dragons anyway, since those matches go so long. It’s unlikely you’ll be able to Dissipate every Dragon they play (though you could potentially get their one Ugin). There are other fringe benefits, such as messing with their delve, but those are unlikely to be very relevant.

This deck is interesting because it tries to combat the weakness of Mono-Red—green dudes and life gain—while still maintaining its strengths, which is that it can be too fast and explosive to deal with. It does that by way of playing fliers—Flamewake Phoenix and Thunderbreak Regent. These cards seem very well positioned to combat the tools that naturally beat you, since they are constant sources of damage that fly through the opposition. Green decks are naturally weak against fliers, and you don’t care much if they play an Arashin Cleric and gain 3 when you’re flying over for 4 or 6 every turn.

Normally, I’m not a fan of those expensive, clunky cards in Mono-Red. If you’re going to go all-in, then go all-in, and doing things half-way isn’t likely to be good. When I’m playing Esper, for example, I’m always glad if my opponents side in Thunderbreak Regent, because it dilutes their game plan of being super aggressive. In this case, however, I think the idea has merit, because Mono-Red is just not well positioned right now, so you have to do something about it. Mono-Red is already playing the most aggressive cards it can, and that’s not enough, so you have to change your approach. Phoenix and Regent let you do that.

That said, there are a couple of things I don’t like in this list. I think it’s remarkably short on both creatures and lands. It has four Lightning Berserker, four 4-drops, and 21 lands. This doesn’t seem like it’s enough to me. I also don’t like Titan’s Strength very much, especially when you don’t have that many creatures. I understand they both help return Phoenix (since it’s otherwise hard to have ferocious), and it does have scry to help with your fourth land drop, but I would prefer a more focused approach. If you’re going to try this “half-way” plan, then go for it—don’t try to hedge between the two.

I think Phoenix and Thunderbreak Regent have merit in this metagame, but I don’t like what’s accompanying them here. I think it’s possible you just want more lands and some Stormbreath Dragons, and at that point you can probably play Draconic Roar as well in some sort of midrange red deck like RG Dragons, but with less Elves and more aggressive creatures such as Zurgo and Eidolon. Even going for Dragon Whisperer and Nykthos seems to be a viable approach nowadays.

Some people have been mentioning Self-Inflicted Wound as a maindeckable card. After some probing, I discovered that the source of those rumors are the Magic Online deck lists. I was looking at MTGO PTQ lists and was surprised to see not one but two lists with maindeck Self-Inflicted Wound—an Abzan Aggro list playing 2, and an Abzan Control list playing 1.

My opinion is that no, it’s not maindeckable. It’s good against some decks, but it does absolutely nothing against others, and it’s not that good a lot of the time it’s good. That’s the main problem with it: it’s either a blank or a slightly above-average card. To justify playing a card that does potentially nothing, it has to be great when it does something, but that is not the case with Self-Inflicted Wound because a lot of the green decks today have creatures that they don’t mind sacrificing, such as Satyr Wayfinder, Elvish Mystic, and to a lesser extent Deathmist Raptor. Maindeck Self-Inflicted Wound is a clear no to me.

That’s what I got for today! See you in Las Vegas.