This week I’m taking it back old school. While Ixalan previews have started dripping out, I wanted to take a look at a Standard that isn’t long for this world, so maybe you can give it a spin one last time before it, uh, emerges from the… format… yeah, no, that doesn’t make any sense. I apologize.

This deck fell off the map after Aether Revolt came out—and we haven’t really seen much of it since, despite the power level of cards like Elder Deep-Fiend, Ulamog, the Ceaseless Hunger, and Ishkanah, Grafwidow. This deck is even running the Shadows over Innistrad misfit Ulvenwald Hydra, doing its best Primeval Titan impression. This was a card on which I had actually speculated some, as being to search your library for any land and making it instantly a 7/7 for 6 mana is pretty reasonable. It never took off, but I am excited to see it in this list that went 6-2 in the Standard Magic Online PTQ in the hands of bone55.

I’m always eager to try out a Temur deck that doesn’t immediately start with “4 Attune with Aether.” I’m also always eager to try out a Temur deck that includes cards like Bounty of the Luxa. Sure, it’s only a 1-of in the main deck, but there are also tons of other cool cards that are great to emerge with (sorry, creatures). Initially, I wonder if a 2/2 split of Rogue Refiner and Filigree Familiar is better than just having 4 Rogue Refiner. While the energy isn’t completely necessary, the life might be. I’m not sure, but I do like drawing the card from the Refiner whether or not it dies, and the extra power could prove useful.

I almost ran out of time against the red deck, but when every life point matters, it’s pretty important to make the best decisions at every turn. I think I came close, but I bet there were some different choices I could have made. For one thing, I should have likely left in the Hour of Devastations. They kill everything in the opposing deck, including Chandra, Torch of Defiance and Hazoret the Fervent, which is a big deal. I was worried about stumbling on the double-red and I figured Kozilek’s Return would be enough.

One problem I foresee is being unable to deal with cards like The Scarab God. That guy is problematic, and your only real answer to permanents like that are your Ulamogs. Thankfully, it didn’t seem to be an issue and I managed to play around them effectively. 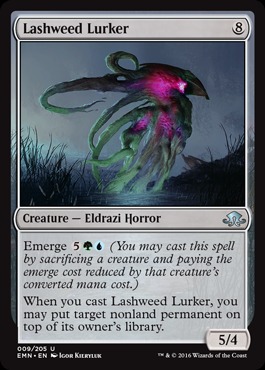 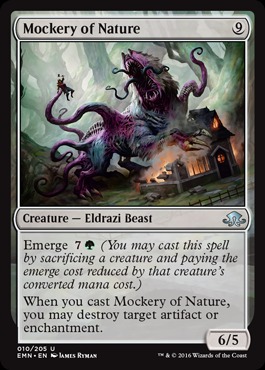 Considering the fact that you have 8 creatures you want (or are willing) to sacrifice, I almost feel like you need another couple emerge creatures. We only have another month or so to play with our Eldrazi toys, but maybe that’s enough time to add a Lashweed Lurker or a Mockery of Nature, at least to search out with Traverse the Ulvenwald. I love the addition of Jaddi Offshoot in decks recently, but I’m not sure that I’m a fan of having just one. By the time you can reasonably search for it with Traverse, it’s likely going to be too late, and I don’t envision drawing it in the matches I need it.

If you are looking for something cool in Standard for the last few weeks of Shadows over Innistrad and Battle for Zendikar, please give this one a shot. While I didn’t win every match, my games all felt close and I enjoyed the heck out of it!