Today I want to talk about Wurms.

Okay, that was a pretty weird way to start an article, but honestly, I’m pretty excited about the deck. It was piloted to a 5-0 finish by Magic Online user JasperCMU and it’s unlike anything I’ve seen in Standard thus far.

I’m not going to beat around the bush here. You folks need to see it before I really get into it.

Yes, you’re looking at a ramp deck that looks to utilize both Approach of the Second Sun and Sandwurm Convergence. 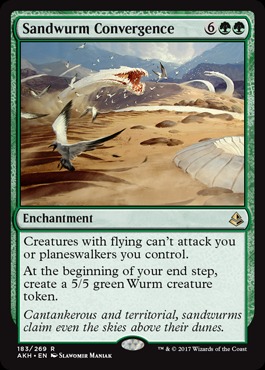 I can’t even process that! This is an 8-mana enchantment, but truth be told, stopping flyers from attacking you (I’m looking at you, Glorybringer and Thopter tokens…), along with making a 5/5 every single turn, is a game-winning combination. And did I mention that you’re ramping? Hour of Promise is another way to get some bodies on the board!

The deck uses Treasure Map to ramp some more, both by the additional land and the Treasures it provides. But that’s not all! The versatile 2-mana artifact can also scry for you and draw cards, providing you some much need card filtering and advantage that green and white decks don’t always have.

I think you get the idea. I’m super excited to try this deck out, so let’s get to it.

Interesting to note is that in addition to these videos, I also took the deck to a local Standard tournament when I was out in California for BlizzCon, where I went 4-1. The deck felt much better, but I made a few changes based on the Magic Online matches I had already played.

The first thing I did was take out Hour of Revelation. While this card is probably great against the token decks, it kills so many of your permanents! It kills your Sandwurm Convergence, it kills your Gift of Paradise, but the worst part is that it kills your Cast Outs, immediately giving your opponents back whatever problematic permanents you had to deal with earlier in the game.

Just like the R/W deck, I don’t like six mass sweepers in this format—there are just too many decks they’re dead against. I removed 1 Fumigate because of this.

I also took out 1 Convergence because while this is a great win condition, you don’t need that many 8-mana spells clogging your opening hands.

With all these gone, I tried out some fun 1-ofs. Some fun-ofs, if you will. I added 1 Slash of Talons, which I wanted for early threats. I added 1 Ajani Unyielding that I wanted as a hard-to-deal-with permanent that provided removal and card advantage. I added 1 Oketra’s Last Mercy, because there were plenty of times where if I was able to reset, I could likely win the game. I wasn’t sure how good these would be, so I was mostly just testing them out.

The Ajani wasn’t great. It was too hard to draw cards because I didn’t have many nonland permanents in the deck. Oketra’s Last Mercy was too narrow unfortunately. I did like Slash, but I also think I want some form of late game card advantage that costs less than 7 or 8 mana. I’m interested in Nissa, Vital Force, especially because she’s able to get back Sandwurm Convergence if it goes to the graveyard.

I also added a second Forsake the Worldly to the sideboard because it’s just very good right now with so many God-Pharaoh’s Gifts and Cast Outs.

The deck could benefit from a splash for Vraska, Relic Seeker. The deck has infinite ways to get a single black source, so there’s no reason to only play 2 colors. You have Hour of Promise, Beneath the Sands, Gift of Paradise, and even the Treasure tokens from Treasure Map. And all I’m even talking about here is a single Swamp! All that combined is about 13 black sources and that’s by only changing a single land in the mana base. I also don’t think adding Duress to the sideboard is a bad idea, especially against decks that are looking to Negate your sweepers.

If you’re looking for something unique, give this deck a shot. I was underwhelmed by the Magic Online matches, but the IRL matches really redeemed it for me.