As I write this, Pro Tour Amonkhet looms big on the horizon. I’m so excited to play I can hardly wait to just get to it. The emergency banning of Felidar Guardian has really opened up a lot of options in Standard and I can’t wait to see how it all shakes out.

Given my testing and preferences I decided to roll the dice with Temur Aetherworks Marvel. It’s a great deck and I like playing it. What can I say? Bant Eldrazi has shown me the light of the Eldrazi way. There are a lot of planes in the multiverse. Is it really so bad if the Eldrazi devour a few of them?

Today’s story isn’t about my safe, boring deck choice for PT Amonkhet. The story of the day is Max McVety and his R/G Pummeler aggro deck.

As I sit here on the floor next to the air conditioner in a humid Nashville hotel room, Max is battling an MTGO League with his labor of love, R/G Energy Aggro, trying to make the final decision between our team’s Temur Marvel or R/G Energy.

The R/G Pummeler deck was also my second choice for PT Amonkhet Standard and I think the deck is a great Standard choice. It isn’t some cutesy throwaway list. The deck is great, and multiple players on my team seriously contemplating running the list at the PT just two days out.

The R/G Pummeler deck was one of the breakout decks from Pro Tour Kaladesh. It’s an energy-aggro-based deck that has a combo-esque pump spell angle.

The synergy between Larger than Life or Invigorated Rampage and Electrostatic Pummeler can easily end a game before it’s barely begun. 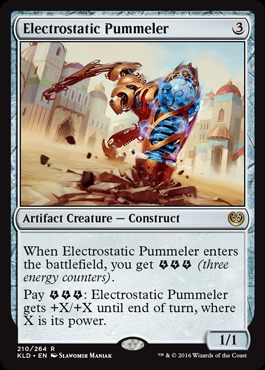 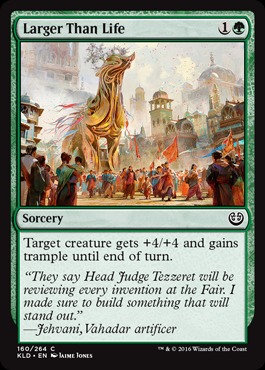 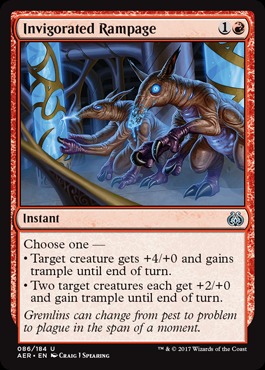 It’s always good to have a great win-the-game nut draw, and R/G certainly has that with Pummeler plus pump spells. It punishes decks and players who are not prepared to interact immediately.

The deck also has a good ability to grind. There are a lot of threats, and a lot of ways to protect them with hexproof spells like Blossoming Defense and Hapatra’s Mark in the 75. 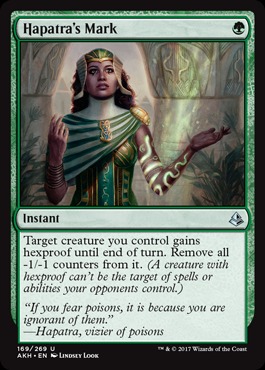 The hexproof is in the pudding.

Other creatures, like Bristling Hydra, have protective hexproof capabilities written right into the card!

All things considered, Bristling Hydra is one of the more difficult creatures to play against in Standard. The ability to repeatedly gain hexproof (and also become gigantic) makes it very difficult to kill. Coupled with the ability to also gain trample from various spells and abilities in the deck, the card is a wrecking ball. Easily one of the major selling points of the deck.

What if Cobra Commander was actually competent?

Rhonas is undeniably a powerful Magic card for your mana investment. The R/G Energy deck is also well tuned to take advantage of Rhonas’s wide array of talents.

First of all, between Longtusk Cub, Bristling Hydra, and pump spells, it isn’t too tricky to turn Rhonas into a formidable fighting monster. The deathtouch ability on Rhonas is pretty scary when combined with spells that give Rhonas trample (since you can assign 1 point of deathtouch damage to a blocker and trample over for the rest).

Rhonas also solves another problem, where a gigantic Bristling Hydra could be chump-blocked repeatedly. The ability to give the creature trample every single turn quickly ends the game and makes pressuring Gideon, Ally of Zendikar a breeze. 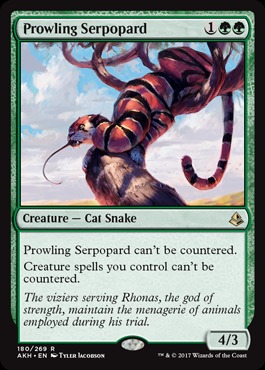 Prowling Serpopard is a unique card. Aside from being a “Cat Snake” creature type, it is highly effective against counterspell decks like U/R Control. You can sneak this slither kitty into play with a Blossoming Defense up and pave the way for Rhonas or Bristling Hydra to come down the following turn. No more will your premier threats be Essence Scattered or Disallowed.

It’s also kind of cool that Prowling Serpopard powers up Rhonas by virtue of naturally having 4 power.

The ability to become grindier via Tireless Tracker is nothing new in Standard—it’s sort of a known commodity at this point. But the deck does have the ability to become less “Blood Lust + Berserk” combo-oriented and more about threats and removal via Tracker and Chandra, Torch of Defiance. Against control decks that have a lot of removal and Negate, you can certainly try to extend the game by drawing extra cards and presenting a steady wave of threats in the form of Clue tokens. If you play the deck, make sure you use Max’s Clue token!

The deck is pretty aggressive, competitive, and a blast to play. I certainly have a special place in my heart for aggro-combo decks such as this one. Another thing worth noting is that the combo/fast aggro element of the deck makes it well positioned against slower combo decks such as Marvel. I don’t anticipate that R/G will be a format defining deck, but I think it is certainly a dark horse Standard pick moving forward.

I mean, who doesn’t like a Cat/Snake/Hydra tribal combo aggro deck!?