We are now 2 weeks into the new Amonkhet Standard format, and with a PT and a couple of other large events in the books, we can begin to paint an accurate picture the metagame.

Today’s article is meant as a guide for anyone looking to quickly learn about the current metagame, and be brought up to speed in a straightforward manner. The battles are always won in the trenches, but such a statement assumes that all the generals already had a solid fundamental understanding of the landscape to begin with!

It isn’t exactly provocative to say that Temur Marvel is the defining deck of Standard. The deck is busted, and has put up dominant performances at the Pro Tour and Grand Prix despite being the known “best deck” and having a big bullseye on its back.

It is telling that everybody is gaming against Marvel and that it still puts up great results and converts with a high win percentage.

Temur Marvel is the ported version of 4c Saheeli that was one of the two tier 1 decks last season. The deck is a grindy energy-based synergy deck that also helps to fuel the “combo” of converting Aetherworks Marvel activations into giant Eldrazi monsters.

Unsurprisingly, the finals of Grand Prix Montreal was Marvel versus Marvel (which says a lot about the consistency of the archetype).

Chandra made a comeback in Jone’s brew and the powerful planeswalker is a nice hedge against hordes of tribal Zombie decks.

What Does Marvel Beat?

Marvel suffers from good deck syndrome. It is all around just a great deck and fires on all cylinders.

It has busted nut draws (turn-4 Ulamog) and it has good board control and removal, as well as grindy card advantage.

You have to keep in mind that Marvel decks are the defining archetype, which means that people are very unlikely to play strategies that are inherently soft to it. With that being said, Marvel still feels like it has a bunch of 55%+ matchups against the various aggro and beatdown decks.

Marvel has moved toward playing more sweepers in the main and board, which appears to swing the matchup in Marvel’s favor. Mardu feels like a coin flip.

“Not a lot of delirium lists on the web these days…”

With that being said, Marvel is the natural predator of B/G midrange “The Rock” style decks and has pushed most delirium out of the field.

A natural counter to combo… BLUE!

I will note that Marvel does have an inherent weakness to blue-based counterspell decks. U/R Control can be a tough matchup because of the amount of permission and card draw. 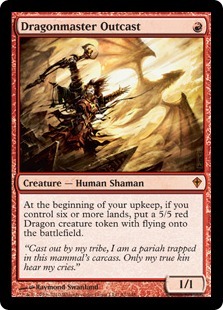 Kibler from the board!

Dragonmaster Outcast is a nice sideboard card that lets control focus on controlling and deploys a cheap threat that can win the long game all by itself.

I went 2-1 against control in Montreal, but had a very finely tuned plan to beat these decks. Despite my best efforts I still lost a match. U/R is likely the best deck against Marvel.

Where’s the flash at?

It is also worth noting that U/W Flash decks have a great Marvel matchup, but are unfavored against basically the rest of the metagame. I won’t be featuring the archetype today, but it is worth noting that if things go too far in the Marvel direction that U/W could make a comeback and be a fine choice at some point.

The next tier of good deck choices are the various aggressive decks floating around in Standard: Mardu Vehicles, Zombies, and G/B Energy.

All of these decks are efficient and bring some good beats, which makes them ideal for attacking Temur Marvel before it can set up and combo off.

Mardu was the best deck last season and I’m not surprised to see it tearing things up once again in Standard. The Marvel matchup feels close and heavily favors the stronger player. Recognizing and capitalizing on what is important and doing it in time is huge.

Max told me that he believes Mardu is favored against the entire field but is an underdog to Marvel. I believe him. I’ve played the matchup a lot and it feels very close to me. I’d say that given the games I’ve played that Marvel has a slight edge but play/draw, strength of hand, and play ability can swing things wildly.

What Does Mardu Beat?

Max said he loved the matchup against Zombies, B/G, and U/R Control, and so I’m going to default to his Top 8 expertise here.

Mardu is just a great deck with a lot of synergy and power. It reminds me of Marvel in that sense. You are likely to be favored most of the time but you’ll have to put in the work to play well enough to grind those margins.

Marvel is a tough matchup for Mardu. Max says that the matchup is bad and I think it’s close. Nonetheless, Marvel is not favorable, which makes Mardu a rough deck to win an event with. How many times can you hope to dodge?

With that being said, Mardu can certainly steal a match or two with those Toolcraft Exemplar into Heart of Kiran draws or an important Marvel spin whiffing.

Zombies is a tribal beatdown deck. The premise is simple: Make lots of Zombies and boost them with Lords. Also, play efficient removal to clear threats and blockers out of your path.

What Does Zombies Beat?

Zombies beats decks that are not prepared for it. If you don’t have a plan for dealing with the Zombie swarm, chances are that you probably can’t win the match.

I believe it matches up well against some of the B/G decks just because the bodies and Lords can easily overpower a board of “fair” defensive creatures. B/G can quickly end up in a position where they don’t have good attacks or blocks.

Most decks have access to sweepers and are packing the heat these days. Zombies performed much better in Nashville than in Montreal but now that players are aware and prepared, it hurts Zombies chances moving forward.

The deck is powerful, but I don’t think there are a ton of good reasons to sleeve it up in a world where everybody is packing Chandra and Sweltering Suns. If you dodge it, it’ll be a good day!

B/G isn’t going anywhere. It has a lot of synergy, a lot of power, and is a great deck.

The most popular builds have moved away from being controlling and focus more on quick efficient beats and strong removal.

+1/+1 synergy that is quickly deployed to the board is also effective against the sweepers that people are playing to deal with Zombies. Turn-2 Constrictor into turn-3 Rishkar embarrasses Sweltering Suns.

What Does B/G Aggro Beat?

The deck feels like it runs pretty close to 40-45% against the field. The lone exception is that it tends to have a favorable Mardu matchup. A lot of Mardu pilots have told me they feel slightly favored, but most B/G pilots tell me they have the edge.

Play this deck if you know you can play it well and enjoy this particular strategy. It may not be the statistical monster that Marvel is, but it is an option. Play to your strengths, Snake fans!

B/G tends to have a lot of close matchups but Marvel is probably its biggest problem. It doesn’t have a ton of ways to interact with a quick Marvel activation and is particularly poor at beating an Ulamog once resolved.

Of course, the sideboard helps, but this is a fundamental interaction that can go poorly at any time.

U/R Control is kind of a strange animal in Standard. It lacks a clear nut draw or powerful sequence to outright steal games but it is consistent in the hands of a seasoned pilot.

U/R is packed with permission, removal, and card draw, and hopes to eventually end the game with some hits from Torrential Gearhulk and Wandering Fumarole.

One of the biggest draws to this deck is that it actually has a favorable matchup against Marvel. Unfortunately, it still struggles against some of the aggressive decks.

What Does U/R Control Beat?

It is favored against Marvel! Which is something I haven’t said many times today.

The fact that it has a lot of answers to the Marvel and presents a problematic, flash clock with Gearhulk is ideal. Even favored, the matchup isn’t unwinnable from the Marvel side but it is certainly a slog.

It is awkward that the games often go long enough that Marvel can hardcast Ulamog and remove opposing threats.

A resolved Gideon is a big problem for U/R Control, which makes Mardu a tough matchup. Yes, Censor and Negate are great answers, but Mardu has a way of forcing U/R’s hand.

When the shields come down and Gideon comes out to play, things can go south in a hurry…

I’ve been playing a ton of Standard and this is how I see the format shaking out here in the third week of sanctioned events:

Marvel is the deck to beat. If you can get a copy of the deck and play it well, you should. But if spinning the wheel isn’t for you, there are other options: One of the fast aggro decks gives you a great shot to win matches of tournament MTG.

Last but not least, U/R Control is an option if you want to prey on Marvel decks and grind tight games against aggressive decks.

All things considered, we have a nice little rock-scissors-paper metagame going on in Standard. It may be a little weighted toward combo, but control and aggro are viable options.

The big question for me is whether or not the control decks will be able to hang with the aggro. It is possible that we see better control decks now that what they need to control is better defined.

A lot of questions, but also a lot of information to sift through. Play what you like. Learn these matchups and you’ll be all set to crush some friendly foes in whatever event you are planning to attend in the next 2 weeks!