Much like every artifact set, Kaladesh and Aether Revolt both have a ton of super cool rare and mythic artifacts that will rarely see any serious Constructed play…

Or maybe they will.

Usually I would think that cards like Aetherflux Reservoir, Panharmonicon, and Inspiring Statuary, while extremely cool, will never make a dent in serious decks. Yet here we are, with all 3 seeing at least fringe play in Standard. Heck, the B/G decks have some copies of Lifecrafter’s Bestiary in their sideboards. Who saw that coming? Even Animation Module made an appearance in last week’s Mono-Black Aggro list to some success.

Today we’re looking at a deck that has quite a few obscure artifact additions in a list piloted by Magic Online luminary Tulio_Jaudy to a 5-0 League finish.

As you can see, you not only have Inspiring Statuary and Pacification Array in the deck, but also numerous Puzzleknots and Implements. Both of these cycles looked almost unplayable to me on first inspection, but it turns out that even the saddest artifact cantrip is a good one when you can tap them all for mana or they provide an abundance of energy. Speaking of energy, Aetherworks Marvel was another card that looked really cute when it was first spoiled, but I don’t think anyone assumed it would be as impressive as it has been. You also have Renegade Map playing the role of worst Expedition Map ever.

Speaking of which, I wonder if they tested it as entering the battlefield untapped. When you’re missing a land drop and you hit this, is it too good to be able to search that turn? Is it too powerful to play 3 of these in 1 turn, then tap them all to improvise? This isn’t netting you any mana on the same turn, so you only gain an advantage after you untap in both situations.

Then of course you have Whir of Invention to find some of these 1-ofs or the Aetherworks Marvel itself. Or, I don’t know, maybe an Implement of Improvement if you really need the 2 life. Anyway, the deck looks fun, so let’s see if it actually is.

So truth be told, I felt pretty unstoppable after those first 2 rounds. I didn’t even feel like the games were close. As I mention in one of the videos, Ulamog, the Ceaseless Hunger is one of the most polarizing cards in Standard. When I cast one, I feel like I absolutely can’t lose and the game is over on the spot. When I draw one I can’t cast, it’s the most awkward thing ever. I feel like in any format with Eldrazi Titans, there should be a See Beyond to shuffle them back in at appropriate times. 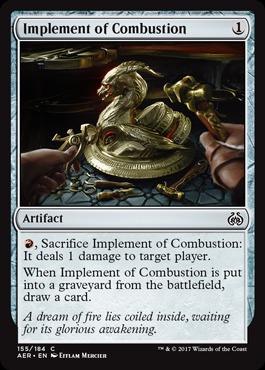 As you could see if you watched all the videos, this deck has few ways to interact with the Saheeli Combo decks, and that was my downfall in 3 out of my 5 matches. The only matches I lost, I lost to being unable to deal with the Saheeli combo. This makes sense if you think about it, as you only really have 8 answers, and not even very good ones: 4 Metallic Rebuke (which they can easily play around) and 3 Whir of Invention to search out Implement of Combustion. That latter plan also requires you to have 3 blue mana along with a land that taps for red mana. Of course, both of these plans go out the window if they cast Elder Deep-Fiend and tap down your lands on your end step. Or if they can just pay for the Metallic Rebuke.

I think Authority of the Consuls could go a long way in shoring up this matchup, providing a card that the Saheeli decks have to deal with before winning via the combo. Maybe a Negate or two in the sideboard as well, or some Stasis Snare. I also wouldn’t mind an additional land in the main deck, since right now you’re only looking at 21.

Those are the basic changes I would make, with the sideboard changes seeming almost necessary. I love the idea of this deck a lot, and outside of the Saheeli decks, most of your matchups seem solid. Let me know what you guys think and I’ll catch you next time!