This weekend was Pro Tour Hour of Devastation and all eyes were on the Standard format. Was the menacing 7-mana artifact, God-Pharaoh’s Gift, going to take it all? Was the format going to be healthy again after the series of bannings by which it had been so plagued?

Well, based on the results of the Pro Tour, I’m not sure which of those statements are true and which aren’t, but I do know I’m not looking forward to our new red overlords. Once the data was available, I scoured the deck lists from the Pro Tour, trying to find a diamond in the rough. Unfortunately, there were few—a couple, but most of the metagame looks like B/G Constrictor, Ramunap Red, and Zombies, with a smattering of U/R Control, emerge-based decks, and Eldrazi decks.

Interestingly enough, the real gems came not from the Pro Tour, but from a PTQ on Magic Online taking place at the exact same moment. While that event had 2 R/G Ramp decks I’m fond of in the Top 8, a few cool lists appeared lower in the standings. Check out this 32nd place deck by yamakiller, who went 6-2 with the deck.

Yeah, that’s a life gain deck, in Standard, that made the Top 32 of an online PTQ. I’m as shocked as you are. Considering that Lone Rider was one of my favorite cards from Eldritch Moon, it’s exciting to finally see the card getting some play. Other than that, the deck is a who’s who of misfit cards, like Odric, Lunarch Marshal, Glory-Bound Initiate, Aerial Responder, and Gisela, the Broken Blade. Some of these cards found homes at one time or another, but they were all underrepresented in Standard. And yet here they are, in all their glory!

One thing you’ll likely realize is that there was no Dusk // Dawn in the deck I was playing, leaving me with a 14-card sideboard. I blame myself for this—for not being more vigilant—but truth be told Magic Online still doesn’t know how to load split cards, even when the deck list in question is downloaded from their own website. So I simply missed that I didn’t have the single Dusk // Dawn included and I missed out on that one. Honestly, I’m not even sure I would have used it, though.

Win or lose, I love this deck. I appreciate that I managed to go (spoiler alert) 3-2, which keeps me on course for matching yamakiller’s record if I win 3 more, which I think is possible. I do wish I had more removal that didn’t cost 3 or 4 mana, and I feel like Immolating Glare could take the place of Stasis Snare. Sure, it doesn’t get rid of blockers, but the deck doesn’t have many creatures they’d want to block. Plus, being able to play a 2-drop on turn 4 and keep a Glare up for a problematic attacker is great. 3 mana is just so much and competes with other relevant drops.

The prevalence of Abrade, and red removal in general, makes things pretty rough for this deck. I’m not even sure I would keep the 4 copies of Aethersphere Harvester in the main deck, despite how good they can be. Realistically, the only creature you always want to crew them with is Thraben Inspector, although they are great with newly played creatures, and especially good with Lone Rider. That being said, having to tap one of your guys only to get hit by an Abrade is discouraging.

As I mentioned in the videos, I wouldn’t mind adding a Bruna, the Fading Light to the deck, but the Timmy in me also wouldn’t mind seeing a couple Felidar Guardians in here either. They’re pretty tough to deal with right now: Abrade doesn’t kill them, Fatal Push, Grasp of Darkness, none of the red spells kill them. On the other hand, I wasn’t a big Odric fan despite our similar appearances. 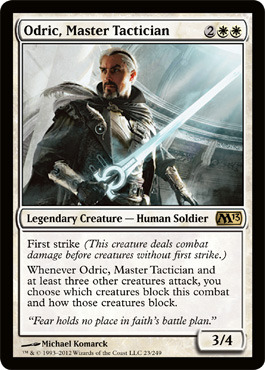