Welcome to my Spoiler Spotlight for M15. I have chosen to look at Preeminent Captain. Why? Because I love pulling shenanigans at unusual times. I love effects like Aether Vial or Windbrisk Heights that you can use to terrify your opponent. Tempered Steel in Extended could get your opponent to chump block your rather meaningless attack, because if you had a Tempered Steel under that land then they were dead… or they didn’t respect it and paid the price.

Before I go into more detail, let’s take a look at Preeminent Captain for those of you who haven’t already memorized all the new cards: 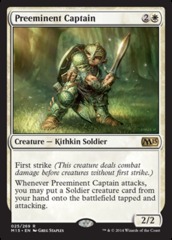 A 2/2 first strike for 3 mana isn’t exactly a headliner. I am, however, much more interested in the triggered ability: during combat you get to put a Soldier creature from your hand into play tapped and attacking. Similar to effects like Aether Vial and Windbrisk Heights, Soldier cards put into play this way can’t be countered as they aren’t cast, merely put into play.

Alas, the restriction on Soldier creatures makes Preeminent Captain a far less powerful effect in general and its playability will depend on whether there is anything worth cheating into play. There is only one thing to do at a time like this: go to Gatherer and look at Soldiers in Standard!

There are 64 Soldiers in Standard (not counting any in M15). However, if you have an effect like Preeminent Captain, you hardly want to be using it to put a Soldier of the Pantheon into play. The hasty turn-4 2/1 isn’t going to scare anyone. So which Soldiers have effects worth cheating in?

First, the sad news: cards that are put into play with Preeminent Captains ability do not trigger abilities that say “when this creature attacks…” as they are put into play attacking and thus have already attacked. This means all the Soldiers (and there are a lot of them) with battalion are not as awesome as they first appear—personally, I like hasty 7/7 Indestructible creatures. Nor does Brimaz give you a kitty token, and you don’t get to dictate combat with Boros Battleshaper. All of these cards trigger on attack or the beginning of combat. Oh how I wish Boros Battleshaper worked, because that could destroy a game. I mean you can still sneak him in this way, but it’s not quite the power play I would want.

I’d like to take a moment to note that Preeminent Captain does allow you to create a tapped Brimaz, which is decidedly unusual, as it enters played tapped and attacking, ignoring the vigilance.

Luckily, I did find a reason to write about Preeminent Captain: 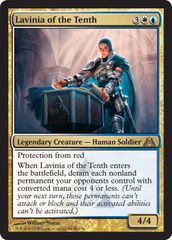 This definitely belongs in an aggressive, white weenie shell. Given we want to play blue for Lavinia, this gives access to Ephara who, while not a Soldier, will provide a draw engine for our creature deck (and, as demonstrated by mono-blue devotion, it is pretty good).

Traditionally White Weenie decks thrive with Anthems such as Honor of the Pure. There are a couple available for decks at the moment although sadly they cost 3—Spear of Heliod and Hall of Triumph. Ajani Steadfast might also perform an Anthem-like function with his -2 effect. What is nice is that with Preeminent Captain you can untap on turn 4, cast your Anthem effect, attack and put another creature into play. That’s an explosive jump in damage that could make Preeminent Captain a viable option in Standard.

Preeminent Captain is actually a reprint from Morningtide. Did he/she see play in Standard then? Well, no, but it was the time of Faeries and WB Tokens. I did scour the archives and found this list that finished in the Top 8 of a PTQ:

This list has 4 lord effects—Captain of the Watch and Honor of the Pure will give our team +1/+1 while Armorsmith gives +1 toughness and Swordsmith +1 power. Sadly there’s no sign of a Windbrisk Heights reprint, so this deck had an extra way to cheats card into play, but Ephara gives us card draw to give us plenty more gas. Interestingly, we are getting a card like Spectral Procession in M15—Triplicate Spirits—if needed, although it is more expensive as we want to be tapping our team to attack, not to cast more spells! Also, Raise the Alarm is back. There is another Lord effect available for use in M15 before someone calls me out on it—Paragon of New Dawns—but it’s expensive at 4 mana if we aren’t cheating it into play. Convoke would work well with Brimaz, though, and I’m pretty certain we want to run that even if we don’t get a Cat for cheating it in. White is also getting Devouring Light which is a sweet, sweet card to have access to. Anyway, let’s throw a list together for you to start with!

There are definitely a lot of different cards you can play around with here. There is Ajani, Caller of the Pride to consider, but I like the -2 effect on new Ajani if we are going to swarm the board. There are also lots of aggressively-costed white creatures at the moment. You could go smaller with Boros Elites, for example.

I hope this has got you thinking about White Weenie come the release of M15. I won’t have an article next week as I’m making room for the ever-exciting LSV set review, so I will see you in two weeks’ time!