If you follow the wisdom of Zvi Mowshowitz, one of the first things to look at in any new format is the mana, particularly acceleration. Fate Reforged gives us a powerful new boost of mana in the form of Frontier Siege, which can provide 4 mana each turn if you take advantage of both of your main phases. 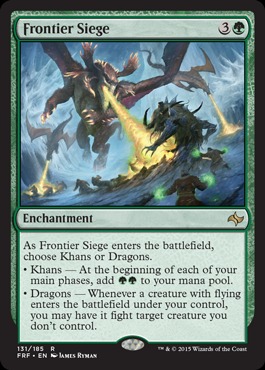 However, in order to make best use of this boost, you need a critical mass of cards to play with that mana, rather than just ramping into one big thing. For this reason, Frontier Siege fits perfectly into an Eidolon of Blossoms constellation engine, both triggering the enchantment clause and giving you the mana to utilize all of the extra cards you are drawing. 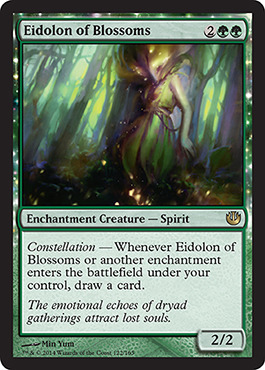 It’s convenient that Frontier Siege also provides you with exactly the two mana needed to activate Nykthos. You can spend mana in main phase one cultivating devotion and main phase two going crazy with Nykthos.

While I fully expect Frontier Siege to spend the majority of time in Khans mode, I’m still excited about the interaction between “Dragons” mode and Hornet Queen. You can build your own mini-wrath by using the Hornet Queen tokens to fight problem creatures. 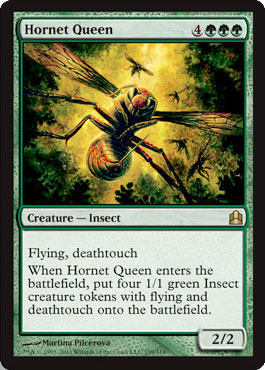 This allows Hornet Queen to stabilize a board without risk of getting removed by Drown in Sorrow, Doomwake Giant, or any of the other cards that have picked up in popularity to deal with the flying menace.

You’ll notice I’ve included a couple of mana-sink enchantments in the form of Nylea and her Bow. 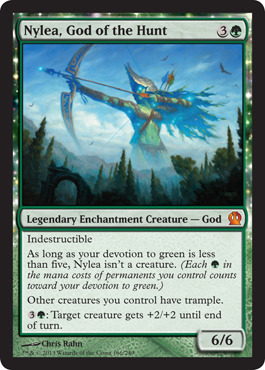 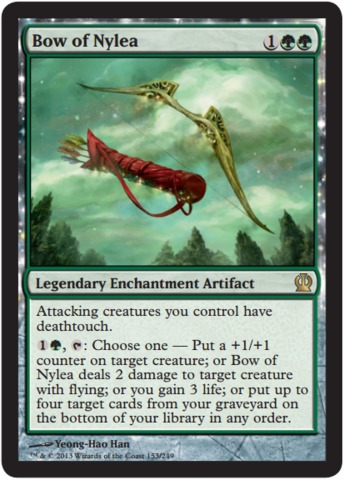 These cards are great at creating an insurmountable board state once you’ve “gone off.” The danger of ramp decks like this is building up to one threat and getting it killed by efficient removal such as Hero’s Downfall. Nylea helps snowball a big board and push through to close out a game—particularly in concert with the deathtouch from Bow.

The Bow itself is great at making sure you don’t get burned out, as well as combining with Polukranos to kill a bunch of creatures while attacking.

This deck also includes the new Whisperer of the Wilds, which is explosively good at generating mana once you have Polukranos or Doomwake Giant in play.

Keep in mind that turning on either God will also enable ferocious for the Whisperer or sideboarded Shamanic Revelation.

Another direction to take Frontier Siege would be in a R/G “Dragons” ramp deck with Crater’s Claws. 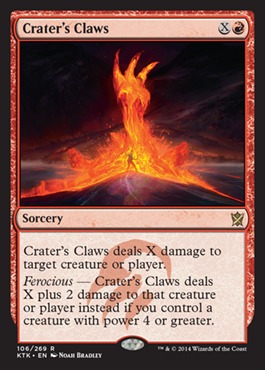 The Dragons mode would combine well with Stormbreath Dragon, and the mana would help you monstrous and make X-spells better. In a metagame where Doomwake Giants were less necessary to deal with Hordeling Outburst and Hornet Queen, I would consider the red direction as a different way to go over the top and finish off your opponent.

For now, Frontier Siege’s contribution to the constellation engine of Eidolon of Blossoms and Doomwake Giant is a great use of a cool new tool.