For nearly two years of Standard play, the black-green color combination has been dominated by the Wildgrowth Walker explore package. With the release of Throne of Eldraine, we’ll lose Wildgrowth Walker, Jadelight Ranger, and several other archetype staples. So is Golgari dead?

My answer is a resounding “No!” We simply have to go back to the drawing board. Eldraine is coming prepared with a lot of great tools for midrange and ramp-style green and black decks. Plus, we get to dip into the pool of strong cards that had been lingering just below the surface in Standard, overshadowed until now by the explore creature package.

What to do with the early turns?

It’s an important question to ask when building a midrange deck. And the answer will determine the way the rest of your deck takes shape. What do you want to do with your early turns? How do we fill the hole that’s been left by Wildgrowth Walker and Merfolk Branchwalker? In my experience, decks that lack proactive early plays are rarely successful. Cards like Legion’s End and Reave Soul are highly useful as cheap plays, but they can’t be all you have.

When it comes to the color green, you often have two options. The first is that you can try to curve out with creatures. Pelt Collector and Growth-Chamber Guardian come to mind. Plus, Throne of Eldraine offers some quality tools for such a strategy, like Syr Faren, the Hengehammer. 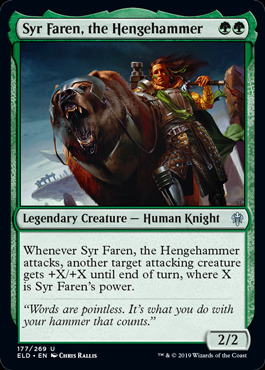 This is a totally valid approach, but it’s not the one that I personally prefer. The reason is that it’s somewhat restrictive. Once you commit resources to attacking your opponent’s life total, you’re committed to going all the way, or else your efforts will be wasted.

For example, imagine this curve: Turn 1 Pelt Collector, Turn 2 Syr Faren, Turn 3 nothing, Turn 4 nothing, Turn 5 nothing, Turn 6 Liliana, Dreadhorde General. Now, in practice, you probably won’t really do “nothing” in the middle turns–you might play removal spells or mana ramping or discard spells. Whatever the case, the point is that this is not a consistent gameplan. Your first two creatures might get your opponent down to 10 life, but the outcome of this game will be determined by whether or not Liliana survives to dominate the board. Why did you even bother with Pelt Collector and Syr Faren?

I want to play with Liliana, Dreadhorde General. I want to have lots of mana and removal, and maybe even some ways to make my opponent discard. So I prefer a second option, which is to spend my early turns on mana acceleration. Creatures like Paradise Druid will basically never go to waste, and they allow me to focus on casting single, potent threats as early and often as possible. My giant creatures and planeswalkers will be capable of winning games all on their own any time the opponent is caught without the proper answer.

Throne of Eldraine offers two particular cards that make me excited to play G/B in new Standard. These cards are very different, but they also make a perfect pair.

I would say that Murderous Rider is the best thing to happen to midrange since Hero’s Downfall, but that might not be entirely accurate. Murderous Rider might be better than Hero’s Downfall! Certainly losing two life will make a difference when it comes to combating aggressive decks. However, the fact that you get a 2/3 lifelink creature in addition to (or instead of) your removal spell offers you card advantage and allows you to build lifegain into your deck for later.

Crucially, Murderous Rider is a creature for the purposes of Once Upon a Time (and Bond of Flourishing). This means that the card you would’ve used to smooth out your manabase and creature curve can now find you your best removal spell also! Once Upon a Time is going to change MTG forever, and one of its best homes is a green midrange deck that’s plenty happy to spend two mana on its effect anyway. In the case of Golgari, the free-spell aspect is just more upside!

This version of Golgari is focused on ramping into the big planeswalkers, while using Questing Beast as a bridge in the midgame.

With the added consistency of Once Upon a Time, this deck will have turn 3 Questing Beast a lot. That’s a great way to put your opponent under the gun, and to make sure you’re the one winning the planeswalker battles.

Alongside Questing Beast in the four-mana slot is Deathsprout. This is a great removal spell, but one that was previously overshadowed by Vraska’s Contempt. With Contempt being replaced by Murderous Rider, which occupies a different space on the mana curve, I think Deathsprout can now find a home in Golgari. I’ve been having a good experience playing with Deathsprout in the 2020 Standard format on MTG Arena.

I’m particularly interested in Deathsprout’s ability to ramp you straight to six mana, as Find//Finality and Liliana, Dreadhorde General are two of the cards I most want to play with right now. I find this to be a particularly devious combination, since Finality punishes opponents for playing out too many creatures, while Liliana’s -4 ability punishes them for playing too few. Like the dreaded fork or double-attack in Chess, this combination can put your opponent in a spot where there are no right answers. 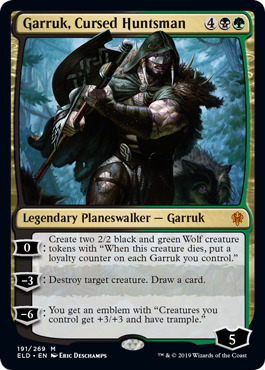 Joining Liliana and Finality at the top of the food chain is (not the Apex Predator) the brand-new Garruk, Cursed Huntsman. What Garruk lacks in passive ability, he makes up for with the potency of all three of his activations. Making two blockers that can give him extra loyalty makes it almost impossible for an opponent to manage Garruk by attacking on the ground. When it comes to the -3, destroying creatures and drawing cards are exactly the things Golgari wants to do. Finally, the -6 ability is a gamewinner once one of your Wolf tokens manages to die which, by the way, you can help along with a spot removal spell, a Liliana minus, or a Finality.

There’s a first look at what a Golgari deck could look like in Eldraine Standard. This color combination enjoys a healthy mix of tried-and-true favorites, plus some exciting new printings that will find their best home in a deck like this one.