Grand Prix Phoenix was a ton of fun and it felt good actually playing a GP again. It amazes me how much better they feel when you go from playing 3-5 a year to one at the most. Not that working a GP doesn’t have its own rewards, but a change of pace is good. Plus, the event ran so well the Swiss was done by 7:15 p.m. Day One and the entire tournament Day Two was done around 6:30. Which means post-event activities were on the table instead of everyone going to sleep immediately.

I loved the location of the GP and I really hope we have one there every year or two moving forward. The weather was perfect, warm without humidity. Hotels were all within 5-10 minutes walking and the light rail made accessing other portions of the city and airport pretty easy. Being next to two sports stadiums also meant there were a ton of food options and other interesting businesses. The venue wasn’t the greatest, but at least it was well air conditioned. Just don’t put one there during the summer months and everything should be golden.

As for how battling went, the GP was a bust for me. I had a pair of byes and won my 3rd round feature match against GW Aggro with only one or two turns I had to sweat. Otherwise, Elspeth did her thing and created an army that just wasn’t going to be beat. Unfortunately the good times stopped there and I proceeded to lose game one of an Esper mirror I felt at the time I was about 95% to win. Upon further reflection and talking the game state out with other people, it was actually a bit closer than I realized and I probably wasn’t as far ahead as I had hoped.

Regardless, being that close and letting it slip away was a bit demoralizing. The next game involved six Nightveil Specters and only two were on my end of the field, so it didn’t end all that well. After that, things fell apart in short order and I was dead-o before round nine even began. Disappointing, but most of my remaining losses weren’t due to player error so it didn’t sting as badly as my round four battle.

Breaking down the Phoenix metagame with Sam Pardee was interesting. I learned that trying to metagame for Grand Prix events that are only getting bigger and bigger is mostly pointless. It’s fine if you want to skew the deck a certain way, but trying to outright guess percentages to figure out a sideboard package is a bit of a waste.

I only played the same deck twice, and the friends I talked with had wildly different matchups on Day One of the Swiss. Even with byes it feels like a total crapshoot of what you’ll actually encounter each round. People are just going to play what they want to play and from that perspective there’s not a ton you can translate into win percentage. Obviously you can take a shot at gunning for the most played deck, especially this late into the format. But trying to micro-metagame like I was doing with my Esper sideboard wasn’t good at all.

As for Standard right now, while it feels finally “solved” to the degree we know what the tier one strategies are, I don’t think that’s bad. It took a while before we got the most out of the format and there were plenty of fun and interactive games of Magic being played. There were also a number ended by Thoughtseize into Pack Rat.

My remaining lesson is one that’s been drilled into everyone’s head over the past two years. It is really hard to put a game completely out of reach for the opponent if you durdle around for any extended period of time. You can’t just lock up the game with total control and exert no pressure most of the time because there are draws you simply won’t beat. The easiest example to use is Rakdos’s Return, the bane of Esper players who, after surviving a maelstrom of discard and big threats, have to deal with this. One sandbagged Thoughtseize or Duress to force through a Rakdos’s Return to put us back at even-Steven is not a fun place to be.

Jamming a giant Revelation or a couple of planeswalkers when the opponent is tapped out isn’t as intimidating when they slam Aetherling. Even aggro decks, which had so little range just a couple of years ago, can now play cards like Assemble the Legion, Mistcutter Hydra, or Stormbreath Dragon—Threats that need to be dealt with quickly or the opponent can steal a game you thought you locked up two turns ago.

Always be closing. Coffee’s for closers and even if you hate coffee, you probably enjoy winning. The easiest way to do that is to immediately press an advantage into winning the game. This was a lot easier to do with low-commitment cards like Restoration Angel and Celestial Colonnade, but now we have to work on it. My biggest mistake in my feature match was not just slamming Elspeth and making my opponent work for his win. Instead I gave him a few turns to try and draw relevant gas by playing the control role. I won, but I made it harder on myself then it needed to be.

Strive is just multi-kicker, it’s going to make some really awkward moments in Limited and if there’s a cheap enough draw or damage spell, I suspect it’ll make a Constructed appearance as well. It all comes down to how safe they played it with the kicker cost for each spell. In Limited, Ajani’s Presence just adds another combat trick to the growing pile of “cards I can’t ever beat” when they’re actually good. The upside is that unlike Triton Tactics you actually have to invest a pile of mana into getting the most out of this.

Constellation on the other hand is basically a take on the classic Verduran and Argothian Enchantress pairing. Eidolon of Blossoms is too expensive to really see Constructed play since a 2GG 2/2 cantrip isn’t exactly the peak of efficiency. What is interesting is that constellation buffs all the bestow creatures, meaning if we get say a pair of good ones it can heavily influence how we build our decks.

Note that that’s in the context of being able to use enough cards from Theros block to make that strategy good. As it stands, almost all the mechanics shown seem to be setting up for their own block format and post-rotation later this year. Constellation as a value plan seems much more viable than building a deck around it. Unless we get a truly bonkers one—which I feel like would have been the draw engine one at GG or something similar.

In Limited it’s another case of getting more value out of your cards, and with the new set order we may see less of the heroic beatdowns from W/R dominating. This mechanic favors playing a longer game and getting even more value out of your enchantment creatures and auras. Having them in the first pack of a draft could definitely bias how you pick and build down the line. 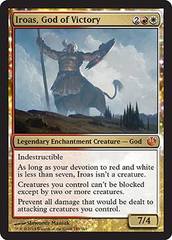 Meh. Ephara, God of the Polis draws cards and Xenagod basically wins the game in two turns. All of them require creatures to do anything. Realistically, the Pyreheart Wolf effect is the relevant portion of the card and while I think that’s good, I’m not sure any deck really wants it right now. Red aggro likely doesn’t care that much except for bypassing Sylvan Caryatid and there are very few other relevant blockers. Red Devotion will likely get the same or more damage by simply playing Purphoros and that card is easier to turn on.

I do think Iroas is aggressively costed enough for people to try it, but I would have loved to see this at 1RW without the prevention clause. That would be interesting enough to really mold a deck around and fire up. As it stands, it’s a little too tough to get the gold Gods to really make a major impact. That one extra devotion makes a huge difference when trying to turn them on and without attacking with it, I wouldn’t play the card for two marginal-to-average combat abilities. 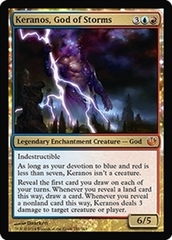 This is one of those cards that everyone jumps up and gets excited about and then gets pulled back down to earth after thinking it through. Is the card sweet? Yeah! I would love for this to be playable, because incremental value engines are some of my favorite cards in Magic.

What stops me is that I need to spend five mana and wait a turn for my first taste of value. So I need to make it through an untap step before I get anything out of this card. Essentially the first usage replaces itself as far as overcosted effect goes, but that’s being really generous. Prophetic Bolt was playable once upon a time, but that affected the board immediately and let you Impulse for the same cost. At a minimum it’ll take two turns for Keranos to draw you a card and deal 3 damage to something.

So we’re looking at a card that really wants four or five turns to provide a sizable enough advantage to turn the tide in your favor. In a control mirror it would be a threat I couldn’t let sit for more than a few turns before seriously wondering how I was going to win. If that’s the criteria, then Underworld Connections, Jace, Revelation and plenty of other cards fill that role. Five mana is a ton in the current format and there’s just not a lot of decks that want to play long games.

One potential spot could be in Mono-U Devotion, which post-board does usually go into a long game against Esper and wants to land an incremental draw engine, whether it be one of the pair of Jaces, Bident of Thassa, or Nightveil Specter. You can’t realistically overpower Supreme Verdict, so by forcing a constant drain on resources you can hopefully stick a better/cheaper way to replenish cards than the Esper player and win from there. Keranos potentially fills that role and by dealing damage it could possibly be more dangerous.

Being unkillable is a neat feature, but Detention Sphere still takes it out of action. Sadly, it feels like a Magic card I would’ve designed entire decks around 5-7 years ago and it just gets outclassed today. I really want to play this card, but why wouldn’t I just slam Assemble the Legion or a planeswalker instead? Now if you could consistently turn it on as an attacker as well… I hope it’s good though, because VALUE!

That’s all for this week, since Standard is effectively over for most players, we’ll soon be upon the 2-3 week span where all anyone cares about if Journey to Nyx spoilers. As a result I’d like to poll my readers as to what they’d like to see me talk about next week.

Finally, a big thanks to everyone who said hi or chatted with me at Phoenix! I really appreciate anyone taking a moment to do so and it makes writing these articles worthwhile.