Shadows over Innistrad has a ton of depth, including sub-archetypes within colors, build-arounds, and unique interactions between cards . I’ll do my best to cover some of these elements when inspecting each color pair, but in 3-4 weeks, after playing with the cards a bit more, I’ll be able to make more definitive conclusions. For now, though, I’ve got some good ideas as to what the color pairs are up to. 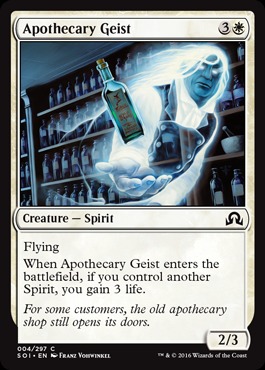 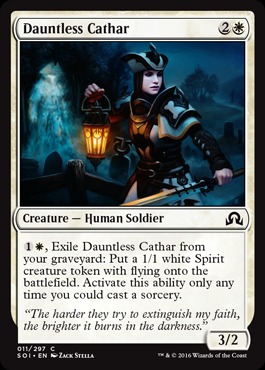 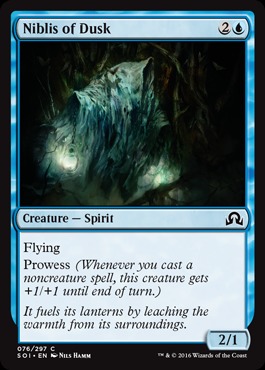 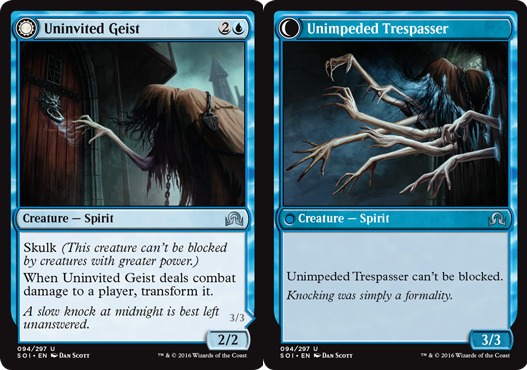 This deck is a classic UW flyers/tempo strategy. Spirits are the central creature type, but it’s more a bonus than an essential theme. Because many of the creatures are Spirits, that means your few payoff cards like Rattlechains and Essence Flux are going to look much better in action than they would as standalone cards, or in a set without as much support.

Past the Spirits, you’ll notice looking through the blue and white cards that there aren’t a lot of connections between the individual cards and the synergies aren’t as striking as other combinations. So the archetype will play out similarly to UW in triple-BFZ draft—a good stuff deck. Sure, awaken was the central idea of UW, but awaken cards were just good spells. I think the same will be true with UW in Shadows over Innistrad. By the end of a draft you’ll end up with a solid number of flyers, many of which are Spirits, and a handful of other cards.

It will be important to make sure you have the right supporting cast to help your flyers race. The first thing that will help is big defensive creatures on the ground. Drownyard Explorers is the perfect example of the type of card you want and, similarly, you’ll end up playing an Inquisitor’s Ox in UW decks because it’s a solid defensive creature, even if you don’t particularly care about delirium.

The second part of winning races is having the right tempo spells at your disposal. If you’re truly aggressive, Press for Answers could be a reasonable card, whereas if your UW deck is slower, then you’ll be more interested in a card like Expose Evil, which can play a defensive role when needed. There are also a number of combat tricks that can be useful in small numbers, but on the whole will be mostly interchangeable in your various UW decks. 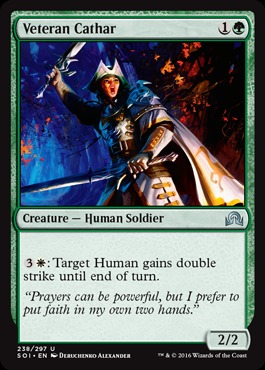 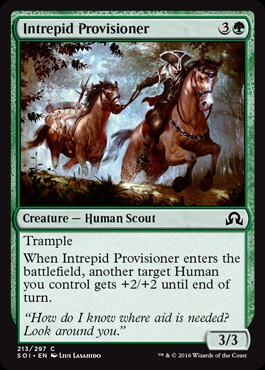 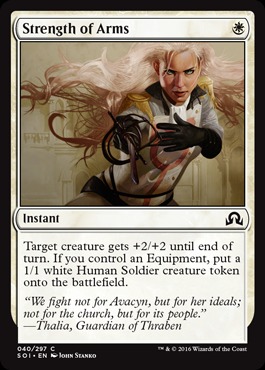 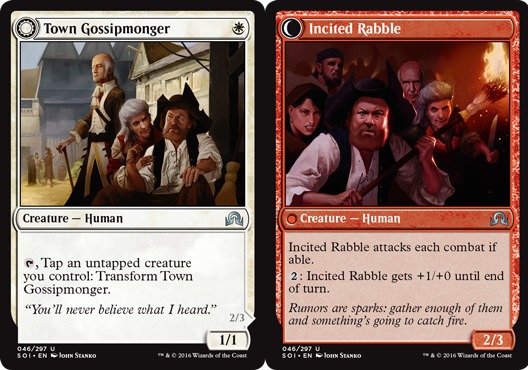 WG is interesting because unlike our last visit to Innistrad, you see neither Travel Preparations nor a huge Human subtheme. That makes drafting WG similar to UW in that the deck will be pieces that fall together and that may or may not have synergy.

With an abundance of cheap Humans in your deck, any Intrepid Provisioners you do draft will certainly be giving a bonus. This lets WG get ahead before an opponent can stabilize. At that point, it is important for WG to beat past large blockers. Timely pump spells in the midgame can help WG do that (which is certainly plan A), but WG also has the ability to go wide. Inspiring Captain is a good example of a card that can help in those later-game scenarios while still being a strong card to cast on turn 4.

If board stalls are commonplace with WG, then perhaps Ethereal Guidance will find a home. This type of effect has been very format dependent over the past few years. In KTK, similar effects were excellent in Mardu shells trying to punch through slower, defensive-creature-oriented Sultai and Abzan decks. Yet Magic Origins showed with Kytheon’s Tactics that similar effects can be unplayable if everyone is trading. Keep an eye on the texture of board states to see if this card is worth running. My guess from the limited amount I’ve seen is that it will sometimes be played, but will more often be a good board card for slower matchups.

One final way that WG decks can succeed is to time removal on turns 4-7 as its swarm of creatures continue to alpha strike. Surprisingly, WG has premium removal this time around, which means that you might actually be able to follow up 3 creatures with 2 removal spells. Good luck beating that curve. Angelic Purge does have a downside, but you’ll have enough small creatures, or a useless land lying around, that the first copy or two will just be great. 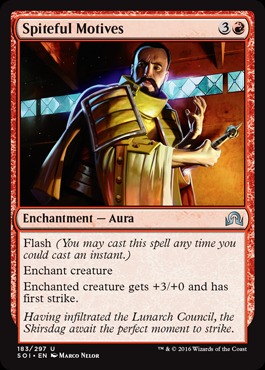 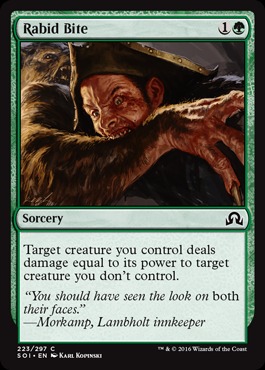 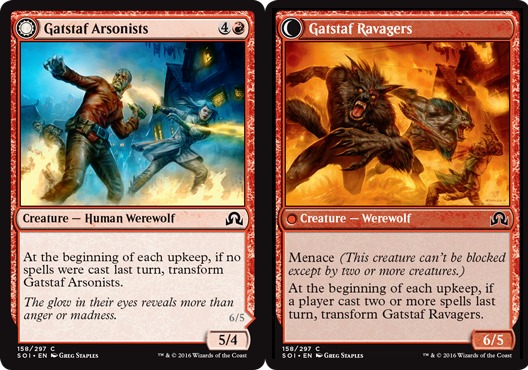 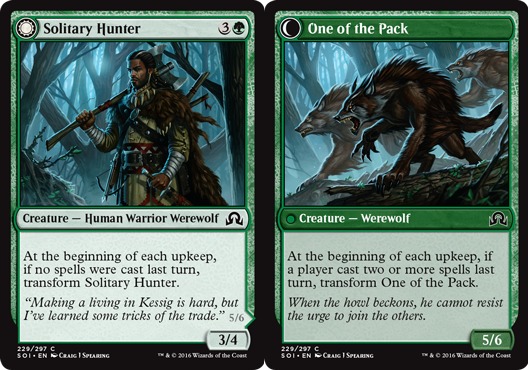 GR is the king of big creatures. They don’t even have to be slow and clunky! GR can curve out efficiently but also have the biggest creatures in play later in the game once all its Werewolves flip. Red and green both offer efficient removal suites including Rabid Bite, which isn’t quite Nissa’s Judgment at half price, but certainly feels close at times. All of these strengths make GR one of the clear frontrunners for best archetype at the beginning of the format, though being the most obvious doesn’t necessarily equate to actually being the best—time will tell.

One way to take advantage of your Werewolves is to prioritize instants over sorceries whenever the power level is remotely close. Cards like Spiteful Motives end up being extra flexible because if you attack into a board and are able to profit off playing it, you can do that. If not, pass the turn, flip your team of Werewolves, and fire the Motives off on your opponent’s turn. This instant-speed bonus means that while you won’t be getting added madness value out of your Fiery Tempers and Lightning Axes in GR as opposed to BR or UR, the cards are still brutally efficient and synergistic in a different way. 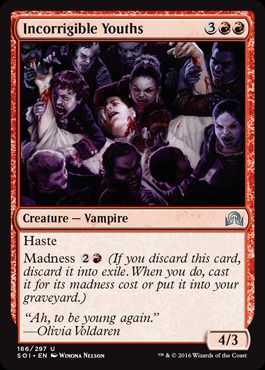 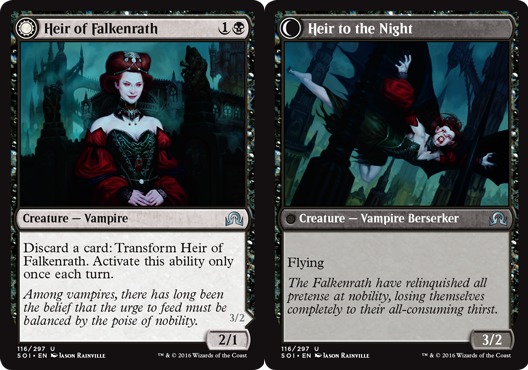 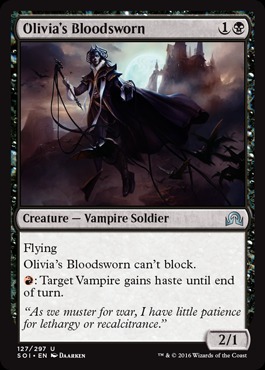 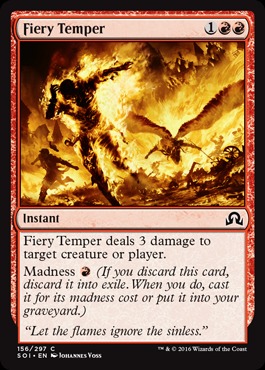 RB is surprisingly tricky for a color pair that is normally about removal spells and bad creatures. This time you get the normal suite of good removal spells, but if paired correctly via madness, you get quite the discount on your creatures. Anytime you Lightning Axe + flash in a Twins of Maurer Estate to block, you’ll have to give your opponent a moment to compose themselves because that sequence is just not a realistic thing to do in a game of Limited—except in Shadows over Innistrad.

RB can take many shapes and forms. The suite of cards range from extremely aggressive all the way up to a more controlling deck with more removal spells. Rancid Rats, for example, is quite bad in the dedicated beatdown deck but is clearly a great card in any deck that wants to trade (and in the Rats’ case, often trade up). The red and black Vampires are more evasive than you’d expect for the colors’ creatures. Of course, that’s totally in flavor for Vampires, but if you’re fighting against RB, be aware that you’ll need to have a lot more defenses against flyers than you might normally. Ironically, Clip Wings might actually be at its best against tough-to-kill RB flyers, since it’s way too likely to only kill a 1/1 Spirit against white.

RB also has the benefit of a bunch of flash effects. I’m not in love with Goblin War Paint, but it gets a whole lot better in the form of Senseless Rage when it eats a creature at instant speed in combat. Stensia Masquerade is going to be one of the most groan inducing cards in the set. The first strike it grants won’t always be all that relevant, but there will be games where it comes into play unexpectedly and generates a 3-for-0. Be aware of it when your opponent attacks strangely and one of the attackers is a Ravenous Bloodseeker. 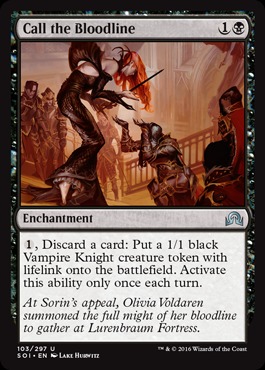 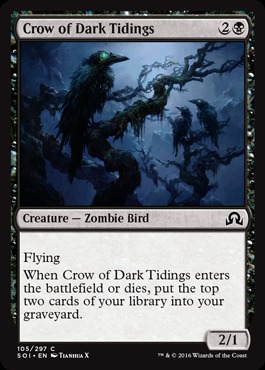 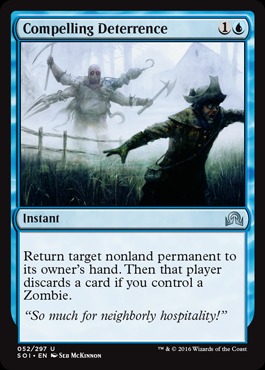 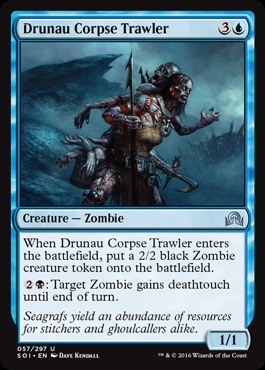 Yet again you have a lot of a specific creature type—this time Zombies—yet you don’t have a ton of payoffs for them. This does mean that, when you’re UB, the Compelling Deterrences and Drunau Corpse Trawlers you end up with will be quite strong. I picked graveyard enablers as the key black cards here because both colors share creatures that can continuously return from the graveyard. This gives Crow of Dark Tidings the ability to sometimes bring friends along with it, and the rate on the Crow is already solid by itself.

UB looks to be quite midrange-y and excels at trading off creatures, which is a great strength since they will only be temporarily dead. Because of all those extra mana sinks, you have to be a little careful not to go too heavy on Clues in this archetype, but that can wax and wane given your specific card pool or cards you’ve drafted. You also still have access to the great blue flyers from the UW deck, and the black cards can help with quick defensive speed and removal so that, some of the time, the UB deck will simply be an alternate version of the UW deck.

I’m excited to see all the iterations of these different decks. In BFZ, GW was Allies, UB was ingest/Processors, but I don’t see quite as distinct a delineation for some of these decks, leading me to believe that Shadows over Innistrad Draft will have a lot of replay value.

Join me next time when I cover all the enemy colors!