In Round 10 at Pro Tour Aether Revolt, during the second Draft portion, I was paired against Jacob Wilson. In our first game, I seemed to have the upper hand, as I deployed a good curve of creatures while Jacob merely played Cogworker’s Puzzleknot, Leave in the Dust, and Reverse Engineer.

And then he untapped, played his sixth land, and showed me these 2 cards:

After congratulating him on assembling that combo, I looked at my sideboard and realized that green-white is not exactly known for its instant-speed interaction. I boarded in an extra 2-drop with the hope of rushing him, but I didn’t succeed. The second game went much like the first, and Jacob assembled the combo once again on turn 6.

The only thing I could do was laugh and snap a picture to commemorate the occasion.

Bizarrely enough, at the Pro Tour I lost more games to infinite Cats during the Limited rounds than during the Standard rounds.

How likely are you to face this combo in a Draft match?

Now, we could determine the probability that at least one Saheeli Rai is opened in any of the 8 Kaladesh boosters and then multiply the two probabilities together. The resulting number would indicate how often a Draft pool contains at least one copy of each combo piece. But that’s not a satisfactory answer to the question. After all, if a Felidar Guardian is taken by a white-black or white-green drafter, then it seems too unlikely that they can incorporate Saheeli Rai. A white-blue or a white-red drafter could probably make it work, but a double splash goes too far.

To analyze how likely it really is to end up with a Jeskai Copycat deck in Draft, I will make the following simplifying assumptions:

As a result of the first assumption, you will see:

To determine the number of W/U or W/R drafters who got at least one Felidar Guardian, we essentially have to convolute the above distribution with various multinomial distributions. I’ll spare you the details—the calculations can be found in this Google spreadsheet. The results are as follows:

Now let’s move to Saheeli Rai. Since there are 15 mythics in Kaladesh and one out of every 8 packs contains a mythic, you’ll open Saheeli Rai in one out of 15*8=120 boosters.

At a regular Draft on Magic Online or your local shop, you can expect that anyone who opens a mythic planeswalker will take it for value. So you’ll never be passed one. In that case, combining the 1/120 ratio with the table above yields the expected number of Copycat players per Draft: 0.0029. This means that on average in the long run, there will be a Copycat player once every 343 casual Drafts.

At the Pro Tour, however, it’s more reasonable to assume that no one takes Saheeli Rai unless they are a W/U or W/R drafter with at least 1 Felidar Guardian. So you’ll always be passed the planeswalker if one is opened. In that case, the expected number of Copycat players per Draft becomes 0.0226. This results in 1 Copycat player per 44 Drafts in expectation.

Since there were approximately 54 Draft pods on Day 1 and 34 Draft pods on Day 2, I shouldn’t even be surprised that someone was able to assemble the combo in Limited at the Pro Tour. It is still quite unusual that I lost two consecutive games to it, but these oddities are what I love about Magic. 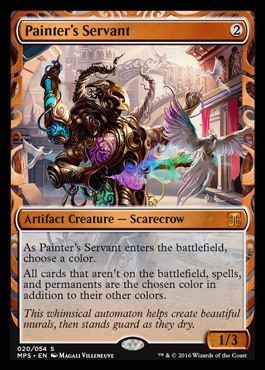 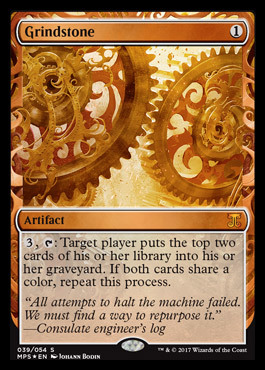 Decking the opponent on turn 3 is even better than infinite Cats on turn 4. Of course, since it involves 2 Masterpieces, it seems unlikely, but how unlikely exactly?

According to Mark Rosewater, you will open a Kaladesh Invention roughly 1 out of every 144 Kaladesh boosters. I have not seen any news that this ratio has changed, so I’ll assume it also applies to Aether Revolt. The other piece of information we need are the number of unique Inventions in every set: Aether Revolt has 24 (including Grindstone) and Kaladesh has 30 (including Painter’s Servant).

So one out of 144*24 Aether Revolt boosters contains a Grindstone (that’s a probability of 0.029%) and one out of 144*30 Kaladesh boosters contains a Painter’s Servant (that’s a probability of 0.023%). Taking into account that you have two shots at a Grindstone, and making the reasonable assumption that everyone who opens a Masterpiece will immediately take it, the probability that you will assemble the combo in a single Draft is 0.000013%.

To put that into perspective: If an AER-AER-KLD draft would start every minute on Magic Online—I expect that to be an overestimation—and people are playing the Draft format for 4 months, then the expected number of online players who open both Painter’s Servant and Grindstone in the same draft over that time period is 0.19.

So more likely than not, it will never happen. But still, there is a chance. Maybe it happened already. And if it happens to you or a friend at any point in the future, be sure to share a screenshot!