Energy is a powerful engine  worth exploring. Red-green is one of the viable combinations for this source of advantage, and I like it best because it can exploit two of the new most powerful cards: Chandra, Torch of Defiance and Verdurous Gearhulk.

Let’s take a look at all the new cards that can fit into this archetype, and then draft a viable deck list.

The most expensive card in Kaladesh is also the one with the highest power level. Four great abilities for a 4-mana planeswalker reminds me of another broken planeswalker. Chandra is perfect for midrange strategies where you can use profitably all of her abilities, mostly the one that lets you add 2 red mana to your pool to cheat on mana and get a tempo advantage. Going turn 3 or 4 Chandra into Harnessed Lightning, and then untapping with 7 mana in reserve is a huge play that will definitely be abused in this Standard. 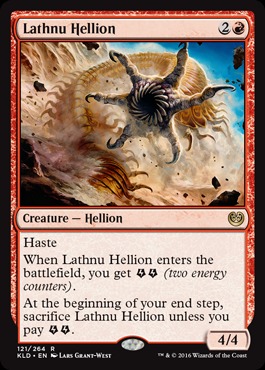 This Hellion is a great threat on turn 3 since it can start pressuring the opponent early, and with your many energy resources you can keep him alive for multiple turns. If your opponent kills it in the first combat, then you will gain 2 energy.

Worse than she is when paired with her husband, Pia Nalaar can be important to remove blockers, and presents an evasive flyer—which is a rare commodity in R/G. Also keep in mind that Tireless Tracker creates Clues, which are artifacts. 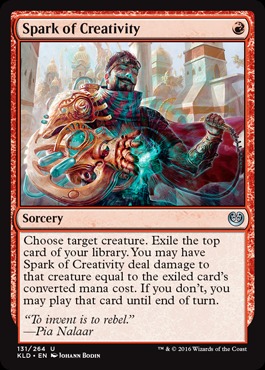 This card is interesting and worth testing—mostly, you need to find out if it’s better than Galvanic Bombardment. Having a random effect is never good in Magic, but since it’s never a dead card and at worst cantrips itself, I can see this card being played.

Harnessed Lightning is the real deal! The perfect card for an energy deck. If you need to remove a 1-toughness creature, then this provides you 2 energy—if you need to kill a 5-toughness creature, then you can use the energy in your pool to turn this Lightning Strike into a Roast. This is a great card that will be played as a 4-of in every red deck for the duration of this Standard.

Green Gearhulk perfectly fits into this midrange/aggressive strategy since it creates a big board early and trumps board stalls late. It will be an easy 4-of in every R/G deck.

Since I’m starting with 4 Verdurous Gearhulk, I don’t think I’ll have many more slots for 5-drops, even if I love Nissa. It will still be played in the sideboard and will be great against control and midrange.

Bristling Hydra is a card that, as with Harnessed Lightning, is well suited for every energy strategy since it provides energy that doesn’t need to be used right away, and it can use stored energy to get even better. It protects itself from a removal spell and gets big quickly.

Architect of the Untamed 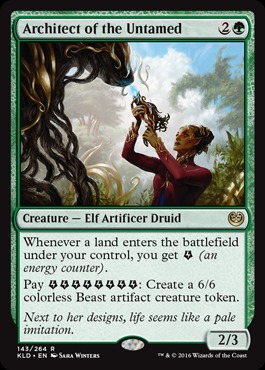 Architect of the Untamed will always be second to Tireless Tracker in a midrange deck like this unless you go full-on energy with Woodweaver’s Puzzleknot. If so, I can see this doing well, but until then, I don’t think this card will be good enough.

This is one of the few energy cards that provides energy only once it connects, and not when it enters the battlefield. It is still a solid 2-drop that will see some play in R/G beatdown.

Servant of the Conduit

The mana ramper we needed! It’s no Sylvan Caryatid or Elvish Mystic, but it lets you play Chandra or Hydra turn 3, which is where you want to be.

It’s better than Deathcap Cultivator because it doesn’t die to Liliana, the Last Hope, and does a better job fixing your mana. Later on, it’ll create energy when you don’t need its mana ability any more.

Voltaic Brawler perfectly embodies the aim of the deck. It beats down, it creates energy once it comes into play, and it can use energy provided by other cards. A very easy 4-of. Remember that this card can get bigger only at the beginning of combat and not once your opponent declares blockers.

This card is great! It’s a 5/3 trample haste that only requires a Servant of the Conduit to crew it again the turn after. The problem is that we already have Chandra and Hydra as 4-drops, and I don’t want to overload. This card will be great against Fumigate, whereas Hydra will be bad, so it can be a good sideboard card. Still, maybe I’m wrong and this card is truly great paired with Lathnu Hellion, and needs to be a main-deck card.

This little uncommon land will be played in every energy deck. It’s a good fixer that will often behave like a Wastes that adds an energy to your pool. If you need to fix for double-colored cards, it will use energy in your pool to get you out of your mana problems. Tendo Ice Bridge on steroids!

The king of midrange, and definitely my favorite card after Collected Company in previous Standard—Tracker will always be a 4-of in every green midrange strategy.

Even if I love my Elf Druid Ally, I want to play other 2-drops that synergize better with the deck and with energy—it’s possible that it’s better to build a deck less dedicated to energy and just jam a bunch of good cards, but I like to start with something more focused to test the new mechanics.

Harnessed Lightning could be enough, but I can see playing a higher number of burn spells to follow up Chandra and to remove blockers.

Costing 1 mana could be huge in a world of very fast R/W and R/G decks. We only need to see if the format is slow or fast.

This poor planeswalker never saw the light of day, and I think it will continue to be overshadowed by better 4-drops.

This is a more midrange version, but I can see building a more aggressive one by replacing some energy cards with Lathnu Hellion and Fleetwheel Cruiser.