Magic Origins drafting has developed significantly over the past few weeks. The metagame has adjusted to the level 1 strategy of play 2-drops and win, so now it takes more work to obtain a victory. The word is out on cards like Might of the Masses and Enshrouding Mist, and as players we have to adjust. With a slightly slower format due to trading 2-drops and players looking to win the midgame, how can we adjust?

The answer is RG, a deck I’ve had a lot of success with recently in draft. It is much more midrange than many of the other archetypes due to its green cards, but is still capable of quick starts that can run over your opponent. The deck also has a reasonably fast defensive speed and produces enough creatures early that it can block consistently when an opponent gets off to a quick start. 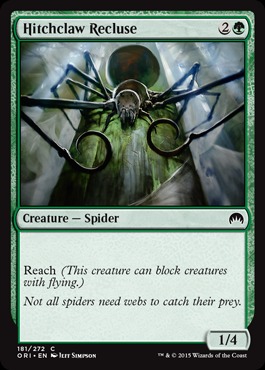 This Spider is not typically the card you want in many of your Magic Origins draft decks since it doesn’t reward you in the context of the format. Magic Origins is all about attacking and Hitchclaw Recluse is clearly all about blocking. The real problem with it is that it suffers heavily in the late game, since big creatures like Rhox Maulers can run right through it, and early creatures backed by a combat trick can also defeat the Spider. However, the combat trick scenario is just a 1-for-1, and RG is looking to buy enough time to play its larger threats.

RG also struggles to stop a steady stream of fliers and that’s where Hitchclaw Recluse shines. Since RG can turn the corner from defense to offense quickly due to its strong 4- and 5-drops, the Recluse ends up being a perfect bridge card.

This card will be bad in most decks, but in RG the card can perform an important role. The deck is much more mana hungry than all the other archetypes of the format, and Nissa’s Pilgrimage can help find extra mana for expensive 7-mana spells, while also ramping from 3 to 5 which is extremely relevant. Playing a turn-4 Rhox Maulers is often enough to hold back a bunch of 2/2s, so taking a turn off to play a Pilgrimage isn’t quite as bad as it sounds. I don’t like going overboard with the card but I like having one in my RG decks, and the second can be fine with enough mana sinks. 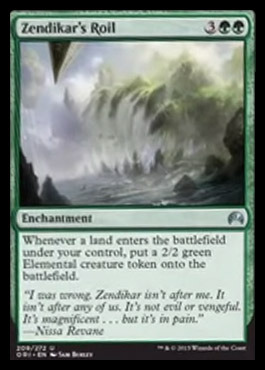 Speaking of extra mana, Zendikar’s Roil is the perfect use for extra land drops. A steady stream of 2/2s is definitely enough to take over a game, and in any circumstance where you aren’t completely run over, Zendikar’s Roil will pull its weight. The card often functions as more of a 6-drop since you can play it and then immediately play your 6th land, which is convenient since RG wants more 5s than a traditional Magic Origins deck. Roil then functions as a 5- or 6-drop which works quite nicely on curve.

The most important part of the Roil is playing to it as a game plan. This means taking less aggressive lines early in the game since you know that you’ll be rewarded as long as you have enough time to stabilize the board and take over with all your 2/2s. 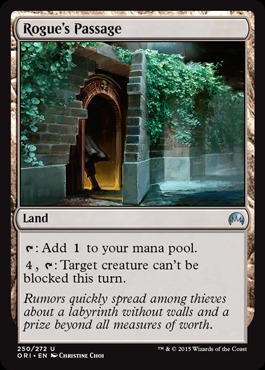 When a board stall occurs Rogue’s Passage is one of the best tools to have access to. One issue with RG is that once the board stalls, a couple Rhox Maulers aren’t going to be able to attack through a bunch of opposing creatures. Rogue’s Passage solves this problem and also plays to RG’s plan of generating lots of mana. Once I know I’m in RG I’ll draft my first Rogue’s Passage very highly since it completely alters games and can be its very own game plan.

How Do You End Up in RG?

Typically you’ll draft reasonable red spells but see red dry up, at which point the depth of green acts to bail you out. The archetype-specific cards like Hitchclaw Recluse and Nissa’s Pilgrimage will often wheel, and you can navigate into a solid RG deck from there. The deck is almost always more green with red as a complementary color, since if the red aggressive cards are flowing you’d end up in a more aggressive archetype and avoid the green pairing altogether.

You’ll usually start each pack with a couple strong red cards like Ghirapur Gearcrafter and Lightning Javelin to pair with your green cards and then switch to picking many green cards as these better-than-average red cards dry up in the middle of the pack. The top end doesn’t matter too much as long as you end up with something. Vastwood Gorger isn’t great but is a fine 6-drop replacement for those times when you aren’t fortunate enough to open a Skysnare Spider.

As I did before, I’ll grade these decks based on the following scale and give a brief description of strengths and weaknesses:

This is a pretty average RG deck but it capitalizes on many of the key elements of the archetype. The Nissa’s Pilgrimages are well supported and ramping out a fast Prickleboar has its merits, though it is one of the weaker 5-drops in RG. Gaea’s Revenge and Ravaging Blaze both take over the late game, as does the Rogue’s Passage. The glut of solid 3- and 4-drop creatures can also push aggression if the opponent stumbles, or help you play catch up.

One final note about this deck is how mediocre Molten Vortex is in it. I wanted to give it a try again even though I’ve had middling experiences with it in the past. The card really shines when a deck’s curve stops at 4, but here I just ended up having to play out my lands to cast creatures for board presence. I don’t think an 18th land would have been better than Vortex here, but I’d consider it.

This deck really hits the key themes of RG and is only missing another 2-drop plus a bomb card like Pia and Kiran Nalaar to push it into the A range. Nissa’s Revelation is quite strong in RG and even offers the potential achievement of revealing Zendikar Incarnate to draw 7 or potentially even more. My earlier comments about Hitchclaw Recluse as the hinge of the deck are evident, and on turns 4 and 5, this deck can suddenly start attacking.

I particularly like Pharika’s Disciple for this reason. It’s a great defender the turn it comes down and then can attack and always at least be a 1-for-1 or a source of repeatable damage that is difficult to block.

Lastly, Might of the Masses plays quite a different role in RG than in other green decks just looking to play it on a 2-drop attacker. Because the board builds up more often, Might becomes a powerful midgame threat and can often represent 6+ damage on an unblocked creature. It’s in no way a key card for the archetype but is very potent and I’m happy having the first two in my RG decks.

I hope you enjoyed this look into RG! I certainly have had fun attacking the Magic Origins format from a slightly different angle.