Unconditional removal is always welcome, and the devil is in the details. This kills everything you care about, even if 99% of the time that just means “creatures.”

As a 7-drop, not every deck is in the target audience for this, but it’s very strong if you can land it. I’d be looking to splash this in Orzhov control, or perhaps Gruul ramp, more than I would just jam it in Rakdos aggro. One thing to note is that putting the opponent to 4 is an effective threat even out of a control deck, as long as you have a couple creatures hanging around.

I’m a fan of this Guildmage, and not even because I was forced to watch the performance. It enables spectacle cheaply, chips at the opponent’s life total, and in a longer game, can get card advantage from the black ability. That’s a nice combination of options, making this one of the better Guildmages.

Fireblade Artist fits very neatly into Rakdos’s strategy, and is efficient enough to always make the cut. It’s a shame this doesn’t work with Act of Treason due to the timing of the sacrifice, but this still pressures the opponent effectively. If you have this, black afterlife cards should go up in your pick order. 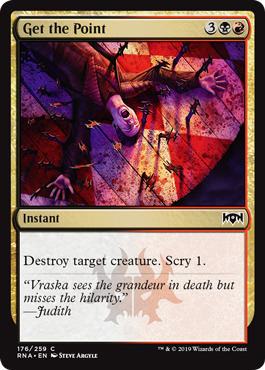 I feel like I can’t even make a joke about the name here because the card itself already does that. Either way, it’s a good removal spell with a nice little scry 1 attached, making it a card I’ll always play and often splash for.

Rakdos loves their pun names, huh? Seems a little too clever by half for this guild, but I guess I’ll roll with it. Hackrobat is an effective combatant, as it can trade with anything and beats 2/x creatures in a fight thanks to deathtouch. The spectacle cost isn’t a huge discount, but every now and then it’ll be a nice bonus.

Judith dominates the board and makes combat nigh-impossible for your opponent. All she asks is that you have a couple creatures in play, but once that’s accomplished, she certainly delivers. Your creatures are bigger so they can’t be ignored, and when they do trade off you get to distribute a bunch of pings.

This either functions as a burn spell or a defensive play, which is kind of a strange combination. I like this more out of the sideboard, as it can be very strong against creatures with ETB abilities or evasion, but you won’t know that until you’ve seen your opponent’s deck.

Neither mode on Rafter Demon is especially exciting, which makes this filler more than anything else. A 4-mana 4/2 is a bad deal, and a 5-mana 4/2 plus a discard is a little better, but it does take work to set up. I’m not impressed.

Firewheeler is a huge beating, even if it’s hard to cast. It eats a creature, pings them for 2, and leaves you with a 4/3 body in return. That’s a ton of action for 4 mana, and this is easily the best of the cycle.

Rakdos decks seem pretty into this. A 3/2 for 3 is a little below the curve, but adding the ability to guarantee spectacle and getting extra damage through is enough to make this an always-run. Like many of the other Rakdos cards, this also plays nicely with combat tricks since the opponent will probably want to block it.

While there aren’t a ton of other Demons, Devils, and Imps running around, Rakdos is still a huge beating. The combo of a 6/6 flyer plus a Thanos snap is a potent one, and it’ll leave your opponents not feeling so good (unless you are Pat Cox, who tried to kill five Zombie tokens with Rakdos and missed on all of them).

This card is really powerful, and good even in control decks. Note that when you turn on spectacle, you can play any card exiled with this, even from previous turns. That’s what really puts this over the top, and makes it a sick draw engine with upside. The ping effect not only enables Theater of Horrors, but also makes it a win condition when all else fails. This card is awesome, and a windmill slam first pick.

From what I’ve seen, most Rakdos decks will be fiending for this, and it also fits nicely into Orzhov. I’m a little less high on this in Gruul decks, but it’s cheap and flexible, so it’s not the worst even there. This trades for 2/2s, forces spectacle through, and plays nicely with sacrifice effects. That’s a lot for 1 mana, and I like this little guy as a result.

Bedeck is such efficient removal that this card is great just on the back of that. You won’t Bedazzle very often, but every now and then you might randomly mana screw your opponent.

Both modes here are solid. You get to ping x/1s at a good rate or just nug the opponent and make them discard a couple of cards. I’m into it.

This is just a solid removal spell, even if it doesn’t really point to any of Rakdos’s themes. It’s also splashable, which makes it a safe early pick.