This card is going to ring your opponent’s bell, and loudly at that. It puts you up a card and 3 life, and leaves a relevant body on the ground. It doesn’t get better than that for 4 mana, even if it’s color-intensive.

I have this as the best card in the set right now. There are some giant monsters that look powerful, but this is just so hard to interact with. It kills all their X/1s, makes your creatures 2 points of stats better relative to their creatures, and even pumps out 1/1 (that are actually 2/2) flyers. This card just seems absurd, and impossible to beat unless you’re overwhelmingly behind when you play it. I’d slam this, splash for it, whatever it takes—it’s unbelievably good. 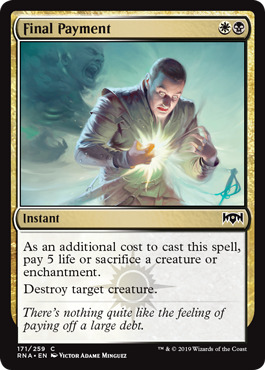 The first Final Payment (which is a phrase that sounds off) is quite good. The cost goes up as you try and cast more of them, but having one will be excellent. If you’ve got a lot of afterlife cards, you can afford multiples, so keep that in mind before going into debt.

I’ve been impressed by Grasping Thrull. A 3/3 flyer for 5 doesn’t need a whole lot more to be good, and a 2-point drain life certainly gets it there. This applies pressure quickly, helps when you’re behind, and is a 5-drop I’d play as many copies of as I could get.

Imperious Oligarch is a really sweet 2-drop. It always provides value, and vigilance means that it can hit for 2 a turn while still defending you, which is relevant on a creature the opponent won’t want to trade with. You don’t have to do anything special to make this good, and it delivers in any style of Orzhov deck.

The range on Kaya is quite high, but overall I don’t think she’s fantastic. Her -1 ability kills tokens, which is strong against afterlife cards, but past that she doesn’t impact the board at all. Her ultimate comes up quickly but doesn’t do a ton, so for the most part I’d only play Kaya as a life gain card in a control deck or as a sideboard card against tokens.

The cost is a little rough for a card you really want to be able to cast on turn 4, but this is still a powerful card that fits nicely into Orzhov’s strategy. It leaves you with some afterlife tokens, and often the opponent will have to overextend into your afterlife cards to begin with. That’s a lot of action on a card that already has a strong text box, and I’d take Kaya’s Wrath early and try to build a control deck.

Knight of the Last Breath 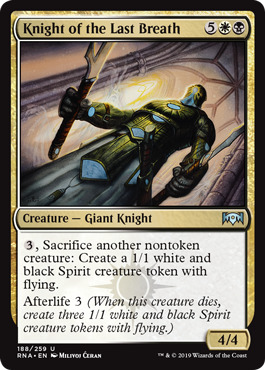 This doesn’t cast Last Breath nor can it die to it. I call shenanigans. Knight of the Last Breath is expensive, and quite vulnerable to bounce and exile effects. It is nice that afterlife 3 punishes a lot of removal, and the activated ability here is a strong one. I like this as a control finisher, but sideboard it out if your opponent has answers that don’t kill it.

This is premium removal, and I wouldn’t be embarrassed to splash it either. Taking out enchantments is a nice touch, as killing Lawmage’s Binding midcombat can lead to a nice 2-for-1.

Pontiff gives you the ability to trade your worst creature for whatever is battling against this, and gives you a sacrifice outlet if you ever want to cash in an afterlife creature or trigger any other death ability. That’s a lot of action for 2 mana, and I’m always happy running this one.

Seraph of the Scales

Afterlife 2 is really what puts Seraph of the Scales over the top. It would be great without it, as a 4/3 with flying, vigilance, and deathtouch is a beater, but having this turn into two 1/1 flyers when its dealt with elevates this to true bomb status.

This Guildmage is passable, but not absurd. It taps down big threats, but not 3-power flyers, and while it can end the game, 5 mana is a lot to pay for the second ability. You’ll always play this in Orzhov, but won’t take it over premium removal.

A 2/4 for 4 impacts the board enough that I would be fine running this with just a few afterlife cards, and once you have 4+ then Teysa becomes quite good. There are also a couple other scattered death triggers around, and she works with those too. 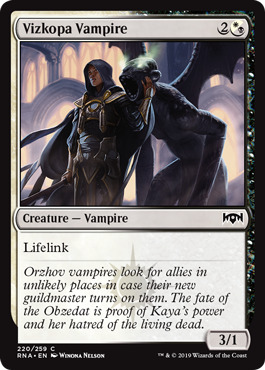 Vizkopa Vampire is easy to cast and demands a trade, which makes it a winner in my book. It’s not going to dominate the board or anything, but getting to trade off and gain 3 life is a fine deal for 3 mana.

A kill spell that eats their biggest creature and gains some life is good, and adding the ability to cycle is a small bonus. You won’t really want to cycle it often, but having the option is just upside.

If you have enough Revival targets, this is a cool card. You get to justify it because it gets back a cheap creature, and sometimes Revenge drops the hammer on them. These are the kinds of split cards I love, where a very situational side is propped up by a more reliable one, giving you a cool range of effects.

This is close between the Oligarch and Thrull, but I’m going with the powerful 5-drop as the premiere Orzhov common. It fits into any style of deck, and is the card that is less replaceable.

Orzhov has some sacrifice synergies going on, but it doesn’t look like it goes super hard on that theme. It mostly seems like a midrange/control deck that’s looking to get advantageous trades going, and has enough removal to make that more likely.