Azorius will be in the market for 3-mana counters often enough that Absorb will be a solid playable, but it’s nothing special. 3 life is enough of a bonus that I’ll feel good about this, but not enough of one to make me prioritize it. 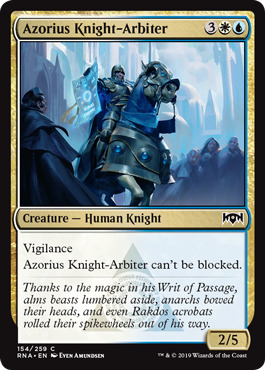 I’m really high on Azorius Knight-Arbiter. I don’t think it quite cracks 3.5, but wow, is it good. It’s a huge defensive presence and a free 2 points of damage a turn, which is well worth the 5 mana you spend on it. 5-drops get clunky in multiples, but I’ll still play two or three of these because of how big of an impact they have.

As expensive as Azorius Skyguard is, the effect is worth it. Giving their whole team -1 power is a huge deal, and is much more powerful than it looks. This dominates the board, and is a must-kill if the opponent wants to get any kind of offense going.

Deputy of Detention handles anything you are worried about, and can even snipe multiples from time to time. That’s a great deal for 3 mana, and this is one of the best Azorius removal spells around.

Dovin can run away with a game quickly, and gets a high rating as a result. There are definitely times when this makes one Thopter and gains you 2 life, but that’s balanced by the times when you play this on the play and the opponent can’t stop you from making a million Thopters. I put a high premium on cards that can dominate the game single-handedly, and Dovin can do that.

Information Campaign is the only thing I’m ever calling this, and it’s pretty sweet. It won’t fit into all decks, but in a deck with 5+ instants that you don’t mind mainphasing, it does do some good work. The 2 life buys you the time to use those extra cards, and Dovin’s Acuity sets you up well for the late game. It’s also too accurate that Disinformation Campaign trumps Information Campaign, but that is how the world works.

My starting position is that this card is not good. It costs a lot of mana and is mostly symmetrical, and isn’t great if you’re behind (which you’re more likely to be if you have a 7-drop rotting in your hand). That said, you can put something large into play or cast Emergency Powers at the end of the opponent’s turn, and both of those break the symmetry somewhat. I suspect this isn’t a card you want to play, but some strange control decks may be able to make use of it.

High Alert is unplayable in most decks and doesn’t even seem that great if you build around it. It does buff some of your Azorius creatures, but spending a card on that and having it only work on a subset of creatures isn’t where I want to be. Maybe I’ll change my mind once someone makes the three Concordia Pegasus + three Knight-Arbiter deck, but I’m not sold right now.

Lavinia, Azorius Renegade is a hard-to-cast bear in Limited, and that’s about the end of it. Neither ability is likely to ever come up, so only play this if you want a 2/2 for 2. 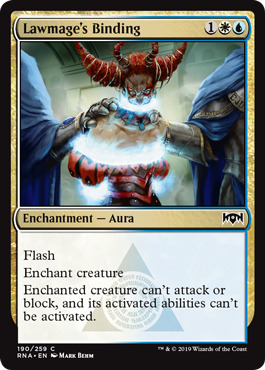 Instant-speed unconditional removal for 3 mana is a steal, and this even shuts off activated abilities. Lawmage’s Binding is a premium common, and one of the best reasons to start off in Azorius.

Cheap looting is great, and gaining life can help stabilize. Two good and cheap abilities on a 2-drop is exactly where I want to be, and Senate Guildmage delivers (unlike our current Senate).

While Senate Guildmage may not have the raw power of some of the counterparts in the “hard to cast” cycle, this is still a 4-power flyer that has vigilance and an annoying protection ability. That’s enough for me, and should prahv to be a card you’ll always be happy to run in Azorius.

I will play Sphinx’s Insight and be happy about it in control decks, but I would avoid it if you’re looking to tempo the opponent out. Most of the time you should cast this on your turn, with counterspells and combat tricks being the main reasons not to. 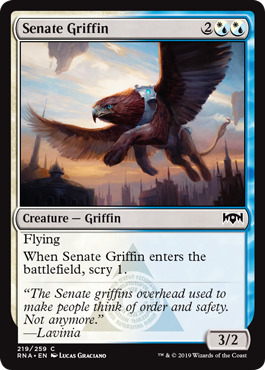 Senate Griffin is a nice, solid flyer, and the scry 1 makes it a welcome addition to any deck.

I love the flexibility on this card. Deploy is a very powerful spell, and is good on its own, so adding the option of tapping down a key attacker or blocker (or just cycling early) is huge. I also like pseudo-splashing this—in Orzhov or Simic, you can just play Depose as a card, and maybe you have one Guildgate that helps cast Deploy if that ever comes up.

Warrant // Warden offers two excellent cards, and they are even good at various points in the game. Warrant is a great removal spell, and is efficient enough to always be appealing. If you’re at the point in the game where you don’t need a 2-mana removal spell, Warden puts a huge threat into play. This is some real chocolate and peanut butter action, and it’s one of the better Azorius cards out there. I’m also amused by how many U/W vigilance flyers are in this set. What happened to the B/G vigilance flyer?

No matter what kind of Azorius deck you end up with, this is the best common by far. It’s always great, and you’ll play as many as you can get.