All of my initial impressions of Ravnica Allegiance are that the set looks like hot, hot fire. When I sat down with the spoiler to brew I was completely overwhelmed. I wanted to build at least one deck for each of the five guilds!

I’m also excited for the prerelease and to have a chance to actually play with these new cards. I’m doing Twitch coverage for the Michigan Pro Tour Practice Draft Event at my LGS, featuring 16 of the best drafters in the midwest. Between covering the pros and spamming infinite Limited on MTGA I’m hoping to be in top form for CFB Events’ MagicFest in New Jersey next weekend.

I hit Diamond on #MTGA! pic.twitter.com/et6OlzxEW4

It was a slog, but it got much easier at the end when I started getting a knack for building better BO1 deck lists. There are a lot of linear White Weenie, RDW, and Jeskai decks in the higher tiers but there are also a lot of decks designed to punish these strategies. Playing “stock” linear decks is a death trap since you end up with a bunch of coin flips and unfavorable matchups.

I’ve had success building decks that were inherently powerful but geared toward punishing the stock lists I’m likely to play against as much as possible. I’ve left the beaten path. Luckily, I’ve had company! My friends and I have started a Discord channel where we design, share, and tune lists specifically for high tier MTGA play.

Most of the members have managed to get to high gold/platinum (many with limited collections) simply by crafting better lists for the metagame.

I had to start somewhere for Ravnica Allegiance and so I went with Rakdos. When it comes to brewing, I’m a firm believer that it serves to start with the red deck. First, it’s usually straightforward to build since it’s typically a focused aggro/burn deck. Secondly, it’s important to design the other decks with the red deck in mind. If your midrange or control deck gets dumpstered by RDW, that’s a good indicator that some aspect of the deck needs to be addressed.

I’m a huge fan of non-traditional red decks and I’ve tried a zillion different things but I really like midrangey red decks with a lot of burn for beating control decks. I call these “Medium Red” as they are hybrids of RDW and Big Red. My first take of Rakdos was to build a Medium Red deck. It’s what I like and one of the style of decks I’ve had the best results with on Arena, and so it’s a logical starting point.

In all fairness, the black splash is pretty small and basically only serves to cast the pseudo kicker modes of the new Allegiance cards:

Both of these cards exactly fill gaps in the deck that I’ve been racking my brain over in the current version of the deck I’ve been playing: 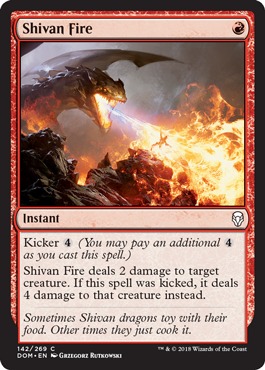 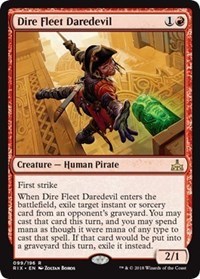 The fewer Daredevils you play the better they get in BO1. It dies to an opposing Whirler. White Weenie decks don’t have flashback targets. I don’t like the card against Golgari.

I love that Rix Maadi Revler will help smooth out your draws and make sure you hit that third land drop or draw out of flood. It’s also an insane draw in a topdeck war. The second point of toughness survives Whirler or Carnival (which I’ll get to in a moment).

Carnival // Carnage is the early game “extra shocks” that I wanted to help clear the path for Warboss. It also picks off Golgari’s explore creatures with the trigger on the stack. Most importantly, it toasts Elves! For value. The second mode is a 4c Blightning, which is amazing in a deck like this that is controlling and bburn-centric. Two copies may be conservative and I can easily see moving up to four copies if the card overperforms. It’s hard to tell in advance of competitive game play, but it could be legitimately format defining. I love that it is great against both aggressive creature decks and control decks.

The other deck I’ve brewed up is base black Rakdos. It’s obviously untuned but there are some powerful things going on here that could have real potential.

Since the mana is geared toward playing Swamp, I’ve cut the Shocks in favor of Fungal Infection and more Carnival // Carnage. The cards I’m most excited about in this deck:

I’ve played a ton of Zombies, and a 2/1 for B with the ability to recur itself is nothing to turn one’s nose up at. A lot of value for just a single B investment.

Spawn of Mayhem also looks very impressive. It’s one of the few 3-drops that can survive Deafening Clarion. It takes a little bit of setting up to arrive on 3 but I’ve included a lot of creatures that are likely to connect: Freebooter and Knight of Malice can attack into a lot of potential early plays.

Bedevil is obviously impressive and flexible. I have a hard time assessing exactly how many copies I want. It’s somewhere between 2-4 and the metagame will dictate where I settle at. 3 feels good. I also love that it blows up Lyra, which is a problem for a deck like this.

I’m not sure if this card is ridiculous or a fun-of. It has a lot of stats and it seems really broken alongside Legion Warboss. I also think that Midnight Reaper would be a reasonable 3-drop for a deck like this. Reaper + Gutterbones is the start of a nice little Zombie deck. 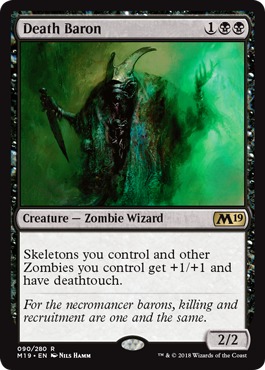 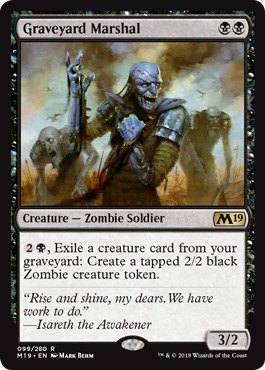 The format is so great because whenever you go down a rabbit hole there are all sorts of neat options to explore. I’m sure I’ll get my Zombie on soon.

Another card to keep your eye out for:

If you are seeing a ton of Elves and Weenies don’t hesitate to Channel(Fireball) your inner Bob Dylan and go Firewheelin’. The card is very powerful but competes with some really powerful 4-drops like Demon and Phoenix for space.

There’s so much territory to explore and it seems like the more I learn about the decks I’m building the more opportunities present themselves! The sure sign of a fantastic Constructed format.

Another quick little aside about writing BO1 articles for MTGA: I love not having to build arbitrary sideboards for undefined formats! Uh, four Duress… so, 11 blind guesses to go to get to 15…

I built two decks and managed to find room for a whopping 7 new cards! The crazy thing is that there were at least three or four more that I wanted to throw in but simply couldn’t find room for. Rakdos is deep. With that being said, did I miss any R/B cards that you’re looking forward to trying out? I’d love to talk about it in the comments.

There’s only a few days left until prerelease, and then…