Hey folks! Welcome back for another entry in my 5 for 50 series, where we take the 2014 Commander precons and revise them with a total budget of fifty dollars each!

$35 of that goes to purchasing a precon, leaving us $15 (or 15 tix, more accurately) to spend on cards to modify the deck. I will be using MarlonBot for all pricing for these articles – not because I like them in any special way or because of any endorsement deal, but because the web interface they have lets me search for any card and get its price in tix.

We’re going in GRBUW order (reverse of the normal order) because of the Nahiri bug on MTGO. Last week we took the Freyalise deck to the shop and fixed it up a bit, so this week we’ll be using the Daretti precon! As before, we’re leaving the planeswalker in charge, which means we’re focusing on the artifact theme. 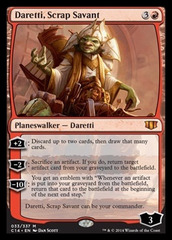 Daretti is either my favorite or second favorite of the new planeswalker Commanders. The +2 is fantastic, especially since you never have to draw Daretti – it provides card selection without the nasty guilt of much card disadvantage! -2 to weld is strong as well and has obvious synergy with the +2. The -10 is insane and synergizes with the -2 (and therefore the +2) making this a very cohesive commander that is a great headliner for an artifact deck.

The deck doesn’t disappoint and is probably the best of the five precons. (All 5 unaltered decklists are available on the Mothership – go see for yourself!) However, as with any preconstructed deck, not all of the cards really fit the theme. Some are aimed more at the Feldon side of things, though honestly, Feldon’s synergy with Daretti shouldn’t be overlooked, and we’re certainly not going to cut Feldon – he’s got serious synergy with some of our other cards. What are we going to cut, then? Well, let’s take a look at some of our less fantastic cards:

Tuktuk the Explorer – Great with Feldon as the Commander, but not as reliable otherwise.

Ingot Chewer – There will be times where, if we cast or Evoke this, we will not be helping ourselves…

Warmonger Hellkite – This card promotes a style of gameplay that Daretti doesn’t want. Daretti wants to sit back and build an engine in peace!

Tyrant’s Familiar – A cool card, but we can stay on theme better.

Impact Resonance – As far as I can tell, this is just a bad card.

Panic Spellbomb – We can really do better than this.

Bitter Feud – A pretty hilarious card, but it’s not really fitting for this deck.

Swiftfoot Boots – I don’t think we have anyone we care about putting this on.

Commander’s Sphere – Even in this deck, there are better options.

Whipflare – Even the asymmetry doesn’t save this one – I’m not much for Pyroclasm.

Dormant Volcano – I hate these.

Flamekin Village – Not super useful for this deck.

So this time we’re cutting 8 creatures, 6 noncreature spells, and 2 lands, for a total of 16 cards. This is pretty similar to the amount of cuts we made last week, but more of these are because I think we can find better options, not because the cards in the precon are particularly deficient. That’s a good thing for the value proposition of these decks. (Not to mention the Wurmcoil Engine, the Welder, and so on.)

So what goes in to replace these cards? Well, let’s talk artifacts! 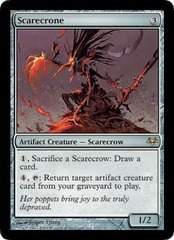 Daretti is super into recursion, and Scarecrone provides that in spades for our legion of artifact creatures. We can also cash it in for a card where necessary. (I don’t think we’ll have many other Scarecrows, but I guess we can dream.) 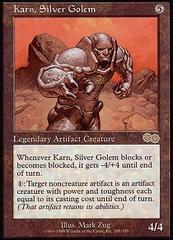 The reprint in VMA helped the price on this card, so we can attack people with Spine of Ish Sah on the cheap! Karn is not much for attacking himself, but animating your artifacts is his real specialty. Obviously this becomes insane with the Daretti emblem because we can just smash in with our noncreatures and then bring them back at the end of the turn, but what isn’t insane with the Daretti emblem? 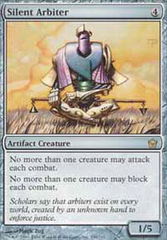 We can use King Arthur here to defend ourselves and then weld it out when it’s time to alpha – what could be better? If you play against token decks this is a great card in general. 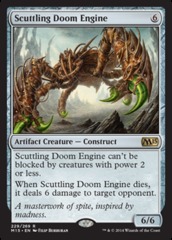 This is a hilarious card with a hilarious name. No one is going to like it when we recur this, but that’s fine, because it’ll be fantastic in the endgame. 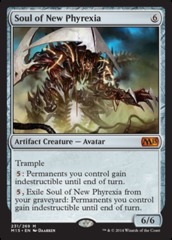 A tough nut to crack and no mistake. Extra mana will be well spent on this effect, and this deck should have no problem dumping this in the graveyard for use at a crucial juncture or swapping it back onto the battlefield for many uses there. 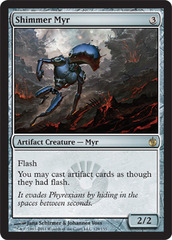 Flash? I love flash! And now our artifacts have flash! 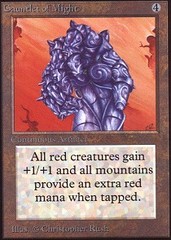 I might not recommend this in paper for a budget deck, but online, this is a great mana doubler for red decks. Obviously we have to watch out for other red decks, but that’s just life. 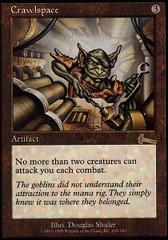 Again, making sure that we’re not being swarmed all the time is great, and being able to conveniently remove this from play when it’s time for our robots to come smash everyone is fantastic for us. (How funny will it be to attack with this once in a while?) 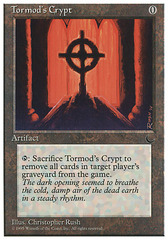 I’m surprised it wasn’t in the original list, but here we are anyway. We need our graveyard, so no Relic of Progenitus for us, but Tormod’s Crypt should do just fine at breaking up other people’s synergies over and over again. 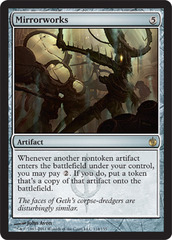 What’s better than one Spine of Ish Sah? Two Spines of Ish Sah, of course! This has tons of synergy with the artifacts in our deck, whether it’s the first time we’re casting them or whether we’re bringing them back from the graveyard over and over again. 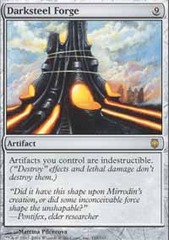 More like Duh-rksteel Forge, am I right? (No. No, I am not.) This is certainly in the “blunt instrument” category, but all the same, it provides a lot of protection against things that aren’t Perilous Vault or similar.

It’s an artifact that clears the board and doesn’t get rid of Daretti, and it only costs a tenth of a ticket? Sign me up! (Oblivion Stone still hovers around 9-10 tix, if that’s relevant to your interests.) 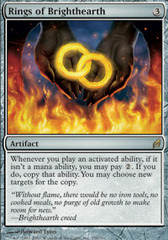 Hooray, something we can use to double up on Daretti’s abilities as well as the abilities of some of our creatures! Not all of our creatures have activated abilities, though – we have quite a few triggers, so that means we should probably find space for… 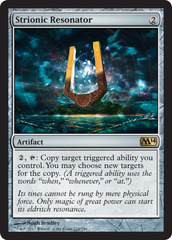 Hooray, something we can use to double up on Junk Diver’s ability so we can get Myr Retriever and something else (or vice versa!) Seriously though, this works well with a surprising number of our cards. Eight Myr off a Battlesphere sounds good, as does two Vindicates off a Spine, but even a humble two Myr off Myr Sire isn’t bad. (This is also where I mention Wurmcoil again!) 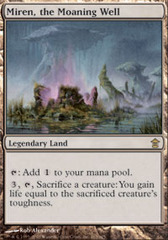 Sacrificing our creatures is going to be relevant almost constantly, and High Market costs almost 8 tickets, so here we are.

Being able to pump out an extra creature to use with Daretti’s -2 will not be irrelevant after a board wipe. Originally I had Mishra’s Factory here but I think Urza had the right idea this time.

Okay, so that’s a total of 14.71 tix, leaving us 0.29 to go buy some Myr tokens or something. (I wish you could actually buy special art tokens on MTGO that would show up in the client for you and your opponent. That would be sweet. Microtransactions ahoy?)

Here’s the updated list for those who want to get building:

That’s it for Daretti this week. As a special bonus, I’ve got a Feldon of the Third Path list here that my good friend Elliot Raff (Boston-area L2 and serious Commander enthusiast) brewed up, and it’s brutally good. It looks like a lot of fun to play, too! Check it out:

Commander: Feldon of the Third Path