Hello! This article is a continuation of part 1, where I presented you a scenario and a poll to indicate your choice. Today I’m going to reveal my answers, and you can check whether your play matches mine or the public’s. I’ll reintroduce the scenarios as a recap, then give my pick.

You’re playing Modern U/W Control against an unknown opponent. This is your deck list:

You’re on the play and this is your opening hand.

Your hand is too clunky to justify trying to pass and getting a tapped Hallowed Fountain, so option 4 is out—you have to do something this turn. In some matchups it’d be conceivable to get an Island, but given that you have Gideon in hand already and you don’t know what you’re playing against, I think you have to get Hallowed Fountain with your fetch, which rules out option number 3 as well. So, it’s between options 1 and 2.

I think both options are close and have merit. The benefits of playing Colonnade first are:

That said, my play is still Serum Visions. This is because, for me, the worst-case scenario is missing your third land drop, which is something you really can’t afford to do. This is how I would order the priorities in this hand:

Playing Colonnade is the play that maximizes options 2 and 4. You’re guaranteed to be able to Mana Leak turn 2, but if you don’t Mana Leak and don’t find an untapped land in the top 2 cards, you will have to cast Serum Visions turn 3 to make sure you hit your third land drop. If there isn’t a land in the top card, then you will have to cast the second Serum Visions immediately.

The best sequence with this hand is probably turn-2 Mana Leak, turn 3 Gideon—and playing Colonnade maximizes that. You only need one untapped land to do it (whereas you need two with the Serum Visions play). But I think this is the type of hand where you want to minimize the worst-case scenario, rather than maximize the best-case scenario, and the play that does that the best is turn-1 Serum Visions.

You’re playing a U/G deck in Hour of Devastation Limited:

You’re on the play and this is your turn 4:

There are a couple of benefits to casting Strategic Planning this turn—you almost guarantee Unesh, Criosphinx Sovereign next turn and you can then cast Ominous Sphinx the following turn, triggering another Fact or Fiction effect. That said, I think this play just doesn’t take advantage of the fact that you’re currently very far ahead of your opponent.

For your Unesh to trigger Fact or Fiction twice, it has to survive for a turn. In a spot where it survives for a turn, however, that probably means that Ominous Sphinx would have survived as well, at which point I’m much more interested in killing my opponent than drawing two extra cards. If they have no way of removing a 4/4 flyer, I think you’re going to win this game no matter what, and if they do have a way of removing it, then delaying your Ominous Sphinx for a turn doesn’t do anything, because Unesh will be dead by the time you untap.

On top of that, if you play Strategic Planning this turn and try to find land, you run the risk of losing because you flood out. You’re playing a deck with only one 6-drop. Past that, you don’t have much use for your lands. Ideally, you are using that Strategic Planning to find spells in the future.

Some people like casting Planning because they can also cast Unquenchable Thirst this turn, which makes it feel like you aren’t skipping a turn for Planning, but I think that play is pretty bad. Your creatures are a 5/4 attacker and two 4/4 flyers, and you’re at 20 life—you don’t care about that 3/2. The only reason to play Unquenchable Thirst on it is because you can’t stand the fact that you have a 2-mana card in hand and will pass with 2 open mana, and that’s not a good enough reason for me.

You’re playing B/G Delirium with Grim Flayer and Winding Constrictor against the U/W God-Pharaoh’s Gift deck. It’s game 2, you’re on the draw, and your opponent mulliganed to 5. Your hand is: 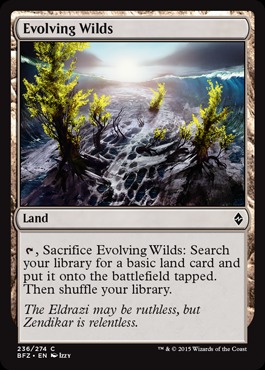 The main choice here is this: Do you want to give yourself the option of playing a turn-2 Grasp, or do you want to guarantee that you’ll be able to play a turn-2 creature and a turn-3 Nissa?

I think that the best play here is to play turn-1 Swamp. Then if your opponent plays Minister of Inquiries, you play a second Swamp and Grasp that, delaying your Nissa for a turn. If they don’t, then you play Evolving Wilds and play turn-3 Nissa. If you draw Grim Flayer, you play that instead—if you draw Winding Constrictor, you still go with the Evolving Wilds/Nissa play.

I think that, given the fact that your opponent is on 5 cards, killing Minister is a priority because it’s one of the cards that can get them back in the game—they can mill Gate and Refurbish it, or they can mill enough creatures to trigger Gate to the Afterlife. Given that the play only hurts you if you draw exactly a 2-drop, I think keeping your options open is the best.

You’re playing a U/G/r deck that’s a ramp deck splashing for removal spells. You have a reasonable amount of late game. You’re on the draw, your opponent led with Swamp, and this is your turn 1:

While it’s important to hit your land drops, I think the key part here is finding your green land. Playing Desert turn 1 gives you a great curve if you find Forest (Abrade into Open Fire into Bounty), but I think finding a Forest is more important. With the two removal spells, I think you’re fine taking a turn off to cycle the Desert if you need to, and you’re also fine playing it at a later point. Playing Desert is the option that maximizes the best scenario, but playing basic minimizes the worst one (not finding Forest), so I think that’s what you should do.

You’re playing an aggressive B/G deck in Hour of Devastation Draft. Your colors are evenly spread and your deck is quite cheap. This is your opening hand:

I think this play is actually super close and all three options have merit. I honestly don’t know which play I think is better.

Playing Swamp and cycling Rotbeast turn 1 offers you the highest chance of playing a green 2-drop on turn 2, and that’s what you want to do because they are better than the Camel. But it offers the lowest chance of playing Rotbeast on turn 4 since, well, you don’t have it anymore. You can also potentially draw into a 3-drop that you want to play instead.

Leading with Swamp lets you keep your Desert in your hand compared to playing Desert turn 1, which is good because you are a low curve deck and you’re already kind of locked on having at least three other lands since you won’t function without a Forest. If you play Desert and end up cycling Rotbeast down the road, you might flood out.

Playing turn-1 Swamp with the intention of not cycling Rotbeast enables playing a turn-4 Rotbeast, and the only downside is that you have a lower chance of playing a green 2-drop on turn 2. On turn 3, if you haven’t found a Forest, you can still cycle Rotbeast and play a green 2-drop, so that’s the same. If you do find a Forest but no fourth land, then you can go 2-drop plus tapped Desert on turn 4 to guarantee Rotbeast turn 5 and you don’t lose much. With this play, you still keep your Desert for later.

Turn-1 Desert has the main benefit of being the most likely to lead to a turn-4 Rotbeast, and also the benefit of turning your Camel on immediately—with this hand, you’re unlikely to want to cycle your Desert early and they might just block it. If the black 2-drop wasn’t specifically Camel, I’d think this play was worse than the others, but since it is Camel, I think it’s close.

In the end, I don’t think I want to play my Desert. I think there’s a decent chance you end up having to cycle Rotbeast, and you might just flood out at that point. There’s nothing expensive you want to play immediately, and you’ll have opportunities to play a Desert later on if you want, either on turn 3 or on turn 4. So, my choice is whether it’s more important to:

Since both options can cycle it freely on turn 3, this is basically what it hinges on. I think that, in the end, cycling the Rotbeast is actually OK, especially if you can also cycle the Desert later on. You already have a turn-4 play no matter what since you have three 2-drops, and they’re not that much worse than Rotbeast. It’s arguable that on turn 4 you’d rather cycle Desert plus play a 2-drop anyway, even if you have 4 mana.

Playing a green 2-drop on turn 2 is marginally better than playing Camel, but it is better, especially if you are not going to play a Desert early on. The cost of that is that you commit to cycling Rotbeast instead of having a choice down the road, but I think that’s something you’re likely to want to do anyway, so I think it’s worth it, especially once you factor in the bonus of hitting a 3-drop that you’d rather play instead.