After taking some time to process my experience at the 106-player Pauper 1K at RIW Hobbies last week, I decided my next course of action would be to focus on the remaining aggressive decks I hadn’t played yet. The obvious starting point: Affinity. 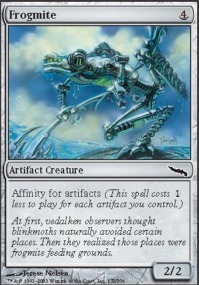 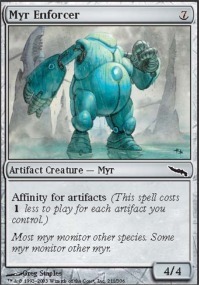 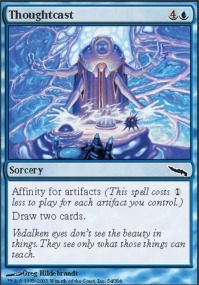 I’ve been around for a while, and I actually remember when Affinity decks played cards with the keyword affinity. With a mana base chock full of artifact lands, the Pauper Affinity deck is truly able to capitalize on this powerful mechanic.

The reason the deck is good is because artifact lands are broken. 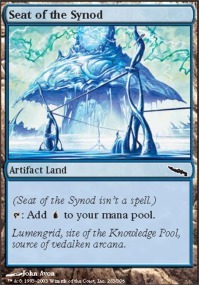 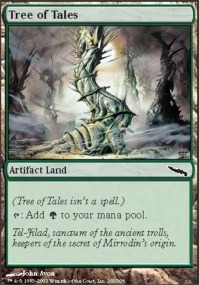 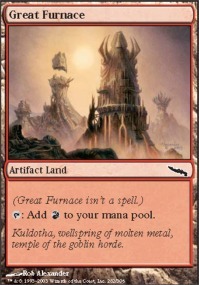 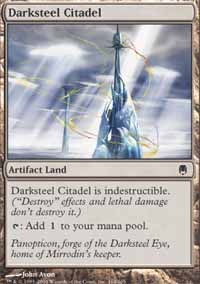 Affinity’s lands serve double- and triple-duty. The artifact lands count as artifacts (which essentially makes them tap for 2 mana when casting affinity spells), they power up metalcraft for free, and can be sacrificed to Atog for copious amounts of damage.

On the brightside for opponents of Affinity: Cranial Plating is banned in this format. It was nice of the DCI to at least give other decks a fighting chance!

Why Exactly is Affinity a “Good” Deck?

If you tell me that a deck cheats on mana, I’m all ears. Artifact lands powering out affinity spells is one heck of a way to get a good deal on cost.

It is important not to confuse Pauper Affinity with the Modern version, because the two are alike in name only. Modern Affinity is a hybrid of linear aggro and combo that is all about speed and synergy. The Pauper version is more of a beatdown deck that gets good rates on large creatures.

“Pauper Affinity is not an Ornithopter deck.”

What is it then? Well, the best way I can describe the Affinity experience is that it is a deck full of 2-mana 4/4s, with good support and a possible combo finish. Not too shabby for a deck that is all commons. 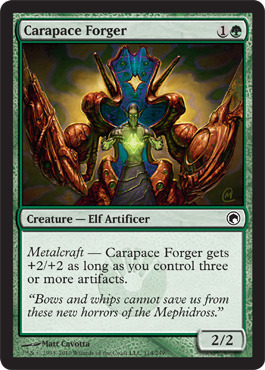 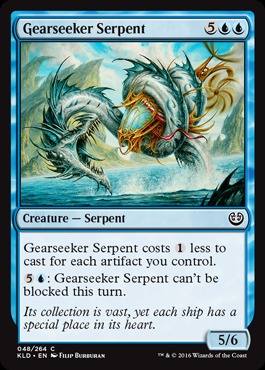 In a format full of small creatures and Lightning Bolts, an army of cheap 4/4s is quite fourmidable. Gearseeker Serpent is even bigger and a huge problem for many decks, especially once you get to the point where you can pay to make it unblockable. Also, it is worth noting that Forger and Gearseeker are not actually artifacts, which makes them immune to the Ancient Grudges and Shatters in sideboards. The Serpent is a big game.

On a side note, one of the biggest mistakes I see people make when they play against Affinity comes with sideboarding. The deck simply doesn’t have small creatures that matter, and yet I see people overloading on cheap removal that doesn’t kill 4/4s. Big mistake. I’m not sure if it’s because people go into autopilot mode and start bringing in cheap removal because that’s what they would do against the Modern version, but I cannot stress enough that Pauper Affinity is very different from the Modern version.

I would board Shock out against these Affinity lists, but I see people bringing them in! The key is being able to deal with 4/4s in a timely manner.

Thoughtcast and Galvanic Blast are simply absurd in the deck for obvious reasons: The rate is great. I wish I could play 8+ of both these cards because they are so strong.

The last piece of the puzzle, the combo finish: 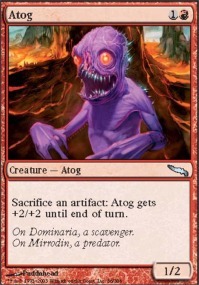 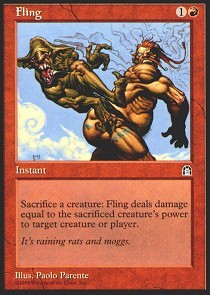 “Teacher says that every time you Fling an Atog at an opponent’s face, somewhere Rich Shay draws Black Lotus.”

Let’s just say I hope Rich was streaming yesterday, because I was Flinging ‘Togs all over the place!

So, it’s pretty simple. You sacrifice a bunch of artifacts to make the Atog huge and Fling it at your opponent. If they can’t counter it, they lose. It’s pretty savage to have a way to just win the game out of nowhere with two cards.

It’s also nice that the deck has a realistic way to break out of a Fog lock with the Fling combo.

Fixing a Broken Mana Base

The mana is the biggest strength and Achilles’ heel of the deck. On the one hand, the lands do more because they are artifacts (affinity, Atog, metalcraft). On the other, the deck is three colors without dual lands. 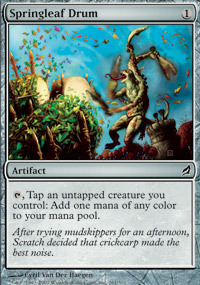 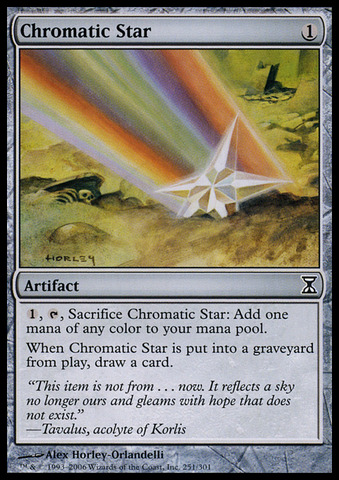 Fortunately, there are some synergistic ways to fix your colors that fit nicely into the artifact theme. I don’t love Springleaf Drum in the deck, but the color fixing feels necessary. The reason that I’ve gone down to two copies is that the deck doesn’t have lots of cheap 0 and 1-cost creatures to use it.

My biggest issue with the card is that unlike a Modern Affinity deck, which is filled with 0- and 1-cost creatures, the Pauper version doesn’t play a ton of cheap critters. Instead, the deck goes bigger, which means there will be times where the Drum is awkward. I added a 17th artifact land in place of a third Springleaf Drum. Two feels pretty good.

The other thing to keep in mind with Affinity is that the sideboard cards are what get you. 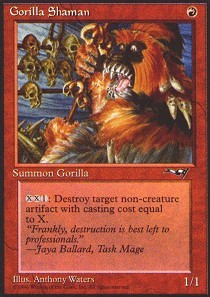 Just like in Modern, the Pauper Affinity deck is pretty absurd in a vacuum but suffers at the hands of dedicated artifact hate. Gorilla Shaman is particularly problematic since it can “eat” your artifact lands for 1 per activation.

It is perhaps the most devastating card in a single matchup across the entire format. So, that is what you are constantly up against when you play Affinity. I’m a big fan of the sideboard Hydroblasts (and could see playing a fourth) just to ensure that you can hopefully counter Mox Monkey before he wrecks your base.

Affinity isn’t exactly a well-kept secret at this point. It is telling that basically every deck that makes red mana has 2+ copies in the sideboard.

Affinity, as tends to be the case whatever the format, is an amazing game 1 deck. It runs on powerful synergies and provides the pilot with great rates on powerful effects. The power of the artifact land cannot be denied.

The downside is that certain cards punish the strategy hard for being so reliant upon artifacts. Decks like Affinity are basically the entire reason that sideboards even exist in the first place.

With that being said, I will likely leave Affinity on the sidelines as I move forward. Not because it isn’t one of the best decks in the format, but because I’d rather be the guy maniacally spamming Gorilla Shamans than the guy with the sad face and no land in play.

Of course, that doesn’t mean that Affinity isn’t one of the clear tier 1 decks of Pauper. I believe it is. I played it in a tournament yesterday and fared very well despite not drawing or playing particularly well and not being able to acquire all of my sideboard before the event. It’s obviously a powerful strategy that can attack from multiple angles: 4/4 beats, Fling-a-tog, and a solid cast of “good stuff.” It’s the kind of deck that would be completely unfair, if people were not specifically ready to deal with it (which they should be).