In a world where players are encouraged to cast giant Eldrazis, everyone figured out it was best to go under rather than fight them head-on. So far, my draft experience has been that actual Eldrazis such as Eldrazi Devastator and Breaker of Armies are near unplayable. The 7-mana ones sometimes make the cut, but that’s pretty much it.

Battle for Zendikar was an attempt to mix Rise of the Eldrazi and Zendikar in the same format. The Rise of the Eldrazi part is barely recognizable, all that’s left are the synergic decks. The aggressive influences of Zendikar, mainly the (admittedly weakened) landfall creatures, are still astonishingly good. 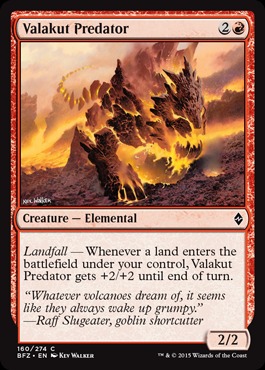 I’m looking at these creatures. They are just completely oversized compared to other 2- and 3- drops. Kor Castigator and Kozilek’s Sentinel compete, yet those are also great aggro cards. The only reasonable creature that blocks them is Fortified Rampart.  As for removal spells, only Gideon’s Reproach and Tightening Coils deal with them in a timely fashion. Sure, Touch of the Void and Complete Disregard take care of them, but you are still trading down on mana.

Not only do your creatures outclass the majority of the opposition, the format splits between aggressive decks and synergic decks—I guess there’s a third portion that’s more midrange/control/Eldrazi trainwrecks. By putting pressure on those synergic decks that try to assemble ingest, Processors, and life-drain shenanigans, you reduce your opponent’s window to set up their engine.

I always want to be in a position where my opponent has Mist Intruder or Kalastria Healer on turn 2 and I have a Snapping Gnarlid. Good luck catching up.

“But Pascal, they are awful if you miss land drops.”

If you miss land drops in the first four turns of the game, you’re going to lose anyway if your opponent is doing anything remotely good. As for the turns past that point, play more lands! I frequently play 18 and 19 lands in this format, it sucks to flood when your game plan is to close the game quickly, but if every land you play pumps your creatures an average of +2/+2, those are lands I want to draw. Especially in this format, it’s really easy to have your 18 and 19th lands be “mini spells”—all of the Blighted and tapped lands are playable.

Base colors: Red, Green, or White?

The beauty of these new Allies is that they affect your other creatures too. Also, The creatures and spells are very interchangeable here—Makindi Sliderunner and Beligerent Whiptail aren’t even in the list. I would try to avoid playing utility lands in a deck that tries to curve and wants to play 17 lands such as this one.

Unnatural Aggression isn’t as good as other fight spells we’ve seen before, but here in RG it’s still great because your creatures just happen to be bigger than average. Playing 18 lands is a necessity with so many landfall creatures, and I wouldn’t be against cutting a spell for a 19th land either. The cards are not as interchangeable in RG as they are in RW, but they are more powerful. Evolving Wilds is fantastic in this deck, grab them when you can.

You can still beat down even if you are not in red, white, or green, and even if it’s harder, this is a good example of a successful approach.

Thanks for reading and see you this weekend in Madison for the GP!