Although I tried a variety of strategies at the beginning of testing for Pro Tour Dragons of Tarkir, I eventually focused most of my efforts on blue control decks. Throughout testing I tried straight UW, Esper, Jeskai, and Sultai. I eventually settled on UW because it offered the most consistent and least painful mana base. It also has the best kill condition by far in Elspeth. Although it’s cheap removal spells are more situational than the options in other colors, the sideboard options are actually generally better than what the other colors have to offer.

This is the U/W deck I’m going to play:

One glaring omission from this deck list is Narset Transcendent. I wasn’t all that impressed by that card when it was first spoiled. Once we started testing with it, our team quickly concluded that it wasn’t a great card. The problem is that it often takes 2-3 turns before it does anything that effects the board. That’s a major problem in a control deck where you should be looking for most of your 4-, 5-, and 6-mana plays to stabilize the board. For a while I was testing one copy of Narset and 1 copy of Jace’s Ingenuity to see which was better. They are both very similar in power level and also both are at their best when trying to punish an opponent who gets off to a slow start. Eventually I cut both of them to add a card from the new set that is actually great:

Dragonlord Ojutai may be the best card in Dragons of Tarkir. It’s an incredibly powerful threat at 5 mana and it’s situational hexproof works perfectly with a deck full of counterspells. One important thing to remember when playing with it in a deck like this is that your opponent will be holding spells that can kill it. Only attack with it in spots where you can protect it or don’t mind if it dies. Even if you aren’t in a position to attack with Ojutai, it gives you an excellent blocker and forces your opponent to leave mana untapped each turn if they want to be able to kill it.

Anticipate is another new card that I’m playing with. It’s not a particularly exciting card, but it does serve an important role in this deck. It makes sure you make land drops early in the game while also helping to fuel delve. From a deck design perspective it also allows you to play with lots of 1- and 2-ofs because Anticipate and Dig Through Time allow you to find them when you need them.

The final new card in the main deck is Secure the Wastes. On the surface this may not look like a great control card, but it does a lot of things that the deck needs. Early in the game it can help deal with a swarm of small creatures. Raise the Alarm and Dragon Fodder are actually annoying cards to answer in a deck without Bile Blight, and Secure the Wastes is a good answer. It can also provide a supply of chump blockers against larger creatures like Anafenza or Rakshasa Deathdealer if you need time to use a Perilous Vault or find an Elspeth. If the game goes longer it gives you a card that can kill planeswalkers or pressure an opponent’s life total. 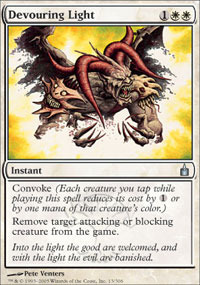 While it’s true that the card is weak against Bile Blight, remember that you can use Last Breath to kill your own token if needed. Secure the Wastes also works very well with the one Devouring Light in the deck. Devouring Light goes from a mediocre card to a strong card if you cast it using convoke. It’s a huge tempo play that can allow the control deck to get back into the position where counters are effective cards.

2 maindeck Negates may seem like a lot, but I think it’s one of the better cards in Standard right now. It’s a great card against any deck that is trying to win with planeswalkers. It’s also surprisingly effective against Mono-Red because they play so many token-making sorceries. I think one of the big strengths of this list is that it gets to play the full 4 Negates between main deck and sideboard. 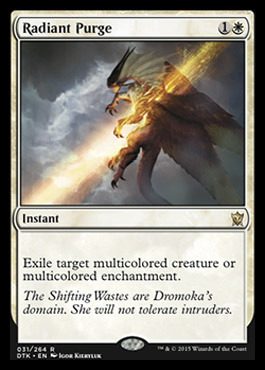 Radiant Purge is a great card against both Abzan Aggro and Jeskai Ascendancy decks. Surge of Righteousness works great against Mono-Red and Abzan Aggro. One card I tried that turned out to be a big disappointment was Encase in Ice. I thought the card could play an important role as an answer to Stormbreath Dragon, but the card is just too weak. It’s terrible against Goblin Rabblemaster and any red dash creature. It also doesn’t even do a good job of answering Stormbreath Dragon because the Dragon can still go monstrous to deal a good chunk of damage or kill an Elspeth. It also makes the deck vulnerable to blowouts from Destructive Revelry. 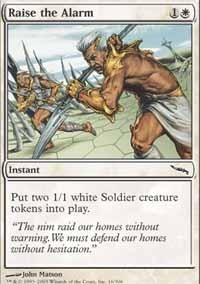 Raise the Alarm is in the sideboard mostly as an answer to opposing Raise the Alarms and Dragon Fodders. It also matches up well against a lot of the low-toughness creatures in Mono-Red. Treasure Cruise is in the sideboard as a concession to the reprinting of Duress. The most common target for Duress or Thoughtseize against this deck is Dig Through Time, and the Treasure Cruises gives you some redundancy to fight against that plan.

Andrew Cuneo is an old-school player most famous for inventing "Draw-Go," his penchant for slow control decks means that The Pantheon will always have a strong control deck if it exists. A tremendous deckbuilder and ping-pong player, Cuneo's presence is invaluable. His favorite creations don't always make it past the cutting room floor—in 2012 he designed a unique Laboratory Maniac deck for Pro Tour Avacyn Restored, though the team eventually settled on a Bant Hexproof aggro deck that took two of its pilots to the Top 8.