This is GerryT’s newest version of Grixis Control in Modern—my Pick of the Week. The truth is, what appeals to me about this deck is that it isn’t like a Grixis Control deck at all, it’s just a Jund deck with blue cards in it. Grixis is the new Jund.

The only successful blue decks in Modern that have not included Serum Visions are Jeskai Control decks and they usually avoid this card because of 4 copies of Celestial Colonnade making its turn one plays more awkward—that said, if you could somehow know how to give a Jeskai control deck the maximum possible win percentage it wouldn’t shock me if that meant playing 2 or more Serum Visions anyway despite the conflict. It’s just a card people have unanimously dismissed as a possibility for the archetype but it’s hard to know if they arrived at that level of certainty through a massive sample of games played or just eyeballing it and following conventional wisdom.

This is a much more difficult question to answer because Jace is so new to the format that it’s not abundantly clear whether playing it is appreciably better than just playing a Dark Confidant. I’m sure they play out very similarly, and my gut instinct says that the Confidant is better because some of the time you play against a combo deck where it can provide disruption, and all Jace can ever hope to do is supplement the disruption you’ve already drawn.

You could argue that Jace gives you a very similar form of card advantage that can snowball quickly into a victory without the life loss. This is the best argument for Jace, Vryn’s Prodigy over Dark Confidant in decks that play both blue and black, but I remain unconvinced. I don’t see any reason why you couldn’t build a Grixis deck with Liliana of the Veil, Dark Confidant, and possibly even Olivia Voldaren.

If Jace, Vryn’s Prodigy is on the rise then I fully expect Twisted Image to become a more commonly played card. It’s totally possible for there to be a metagame where Twisted Image is an all-­star against every non-combo deck you face. 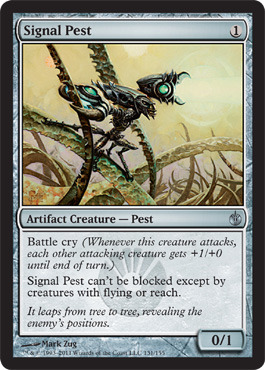 There will always be Splinter Twin and Burn where it’s pretty much terrible, but as long as Modern has been a format then Twisted Image has been a card I have kept a close eye on.

Lastly, I’m surprised to see 2 Creeping Tar Pit in this list. I’m not at all surprised to see Gerry playing with it as he’s been putting that card in his decks since before it was cool, and by that I mean before it was optimal. Here I feel the midrangeyness hasn’t been taken to the level it should have and much like Jund, which almost always runs 4 Raging Ravine, this deck should run 4 Creeping Tar Pit. As long as people play multicolor midrange decks, the cycle of Worldwake manlands will be a staple of how we build mana bases in Modern. We’ve always seen Celestial Colonnade and Raging Ravine, Stirring Wildwood makes the occasional appearance, and Lavaclaw Reaches is the runt of the litter. Creeping Tar Pit only sees as little play as it does due to the unfortunate circumstances of its color combination. If there were more good decks that played both blue and black then you would see more Creeping Tar Pits, and I feel strongly that that time is now.

The most attractive quality of these new Grixis decks is the ability of the deck’s pilot to customize the 1-­ofs to better suit the metagame. Between Jace and Snapcaster, if I put one Forked Bolt into my deck, I can repeatedly reuse Serum Visions to give me a better chance of drawing it than if I were to just put 1 Forked Bolt in a Jund deck. Also, if I play a matchup where Forked Bolt is one of my better cards, I can cast it multiple times in a game. This is huge in a format like Modern where you want to build for consistency and versatility all at the same time. Being able to only include 1 of a certain card, like the aforementioned Forked Bolt, and draw it at a rate that isn’t consistent with 1/60, and even cast it multiple times, is pretty awesome. You can have a huge range of cards to push your deck to perform in vastly different ways against different styles of decks.