The week of June 18th forced us to ask the question: Can anything stop Goblin Chainwhirler? With Core Set 2019 fully spoiled and two Grand Prix in the rearview mirror, the answer remains unknown.

The full card list for Core Set 2019 has been released. The first Core Set since 2015’s Magic Origins, Core Set 2019 will be part of Standard for a single year. The reintroduction of the Core Set is seen as an opportunity for Wizards R&D to introduce potential answers to problematic strategies from the surrounding expert releases while also providing cards that could see play in non-Standard formats. Alpine Moon, Isolate, and Remorseful Cleric are three such cards—narrow in application but with a high potential for impact in Modern and beyond. 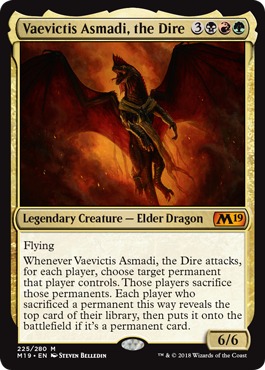 Core Set 2019 follows the story of Nicol Bolas—his rise to power and subsequent plots to regain his lost nigh-omnipotence. All of Magic’s original Elder Dragons, from the set Legends, get new cards in the set. Core 2019 also features six new planeswalker cards—one in each color and a Nicol Bolas legend that transforms into a planeswalker.

Core Set 2019 will have its prerelease July 7 and 8 and will be officially released July 13. Once again, Wizards of the Coast is running the buy-a-box promo for local game stores. Picking up a box of Core 2019 during the prerelease will net you a Nexus of Fate promo.

The first of two Standard Grand Prix over the weekend of June 23rd, Grand Prix Singapore saw the first hole in Goblin Chainwhirler’s armor. After several weeks on top of Standard, it appeared that the metagame had adjusted to midrange and aggressive red strategies. While there were six distinct archetypes in the Top 8, there were 16 total copies of Goblin Chainwhirler across two copies of Mono-Red Aggro and two copies of Black-Red Aggro.

Yuuki Ichikawa, in his ninth Grand Prix Top 8, came prepared. Using White-Blue God-Pharaoh’s Gift, he dispatched a Black-Red Aggro deck and a Mono-Red Aggro build on his way to the finals. When four copies of Angel of Invention were not enough, Ichikawa added two Sunscourge Champion to his main deck and two Lyra Dawnbringer to the sideboard. In the finals he bested Tatsuhiko Ohki and Esper Control to give the Japanese pro his fourth Grand Prix victory.

While he didn’t win the tournament, Ryoichi Tamada made the Top 8 going 13-0-2 in the Swiss. Powered by Teferi, Hero of Dominaria, Search for Azcanta, and Torrential Gearhulk, Tamda’s Jeskai Control deck provided another take on how to attack the format. Trading in cards like Vraska’s Contempt and Fatal Push for Magma Spray and Harnessed Lightning, it will be interesting to see if this flavor of control can catch on.

After Tamada’s victory in Singapore, one had to wonder if Grand Prix Pittsburgh would continue to show the potential weaknesses in Goblin Chainwhirler decks or if the red menace would rise to the top again. The Top 8 had fewer copies of the ubiquitous card—only 12 across three decks—with multiple control and midrange decks vying for the top spot.

While the semifinals saw a Black-Red Aggro deck fall to Blue-Black Midrange in the hands of Oliver Tiu, the second other half of the bracket saw Mono-Red face off against a White-Blue God-Pharaoh’s Gift deck, not unlike the one Yuuki Ichikawa used in his trophy run. In a match that went the full three games, including a lengthy judge call, the repeat was not to be. Jack Kiefer and his God-Pharaoh’s Gift faltered in the face of Braham Thomas’s Mono-Red Aggro.

The finals were a much shorter affair. Thomas made short work of Tiu in game 1. Game 2 saw both players get off to a slow start but the combination of Chandra, Torch of Defiance and a kicked Fight with Fire meant that the red deck won the day once again.

Congratulations to Braham Thomas, the fiery winner of #GPPitt!

That's all the Magic happening tonight in Steel City—join us next weekend (June 29-July 1) from beautiful Spain with a return to Modern at #GPBCN. pic.twitter.com/6cksE4vrgt

While he may not have won the tournament, Oliver Tiu’s Blue-Black Midrange was emblematic of many decks that performed well on the weekend. Featuring powerful removal and a strong threat in The Scarab God, it is possible that this flexible deck has what it takes to challenge the de facto best deck in Standard.

Next week, the pro circuit turns its focus to U.S. Nationals. With multiple slots on the United States World Magic Cup team on the line, we will get another chance to see if any deck can make waves in Standard and unseat the Mountains at the top. The Grand Prix circuit travels to Barcelona and Modern. After Krark-Clan Ironwork’s dominance in Las Vegas, it will be interesting to see if another deck rises to the occasion.