A lot happened in the world of Magic last week. From the physical realm to the digital one, to Magic’s first home, here’s what you need to know to catch up on last week’s happenings.

After the non-disclosure agreement was lifted, Arena streams began to appear. The game rolled out another 100,000 closed beta invites and reset collections. Cards from Amonkhet and Hour of Devastation were introduced to the system, giving the platform two out of the three blocks currently available in Standard. Each account was populated with ten preconstructed decks, one for each color pair.

The product also includes the original art for Jace Beleren and Counterspell from Duel Decks: Jace vs. Chandra. All the cards have a special, Jace-themed frame. Each package will have one additional card—a premium foil version of one of the eight cards.

The card list for the final Duel Decks was revealed this week. The product features new art for cards like Ezuri, Renegade Leader, Thopter Assembly, Goblin Welder, and Temple of Epiphany.

There was a torrent of news related to Magic’s next block. Some of the news has already been public due to the leak of the Dominaria FAQ. The new template for adding mana to the mana pool will be “Tap: Add [M]” removing the words “mana pool.” The line delineating flavor text from rules text also got an official article, as did the update to how damage interacts with planeswalkers. We also finally got a look at the new legendary card frame. 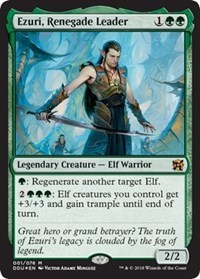 Also from this update, spells that refer to themselves will now read “this spell” as opposed to spelling out the card name in the rules text. A separate article was released that detailed the mechanics from Dominaria that include Sagas, kicker, historic, legendary sorceries, and the introduction of “hexproof from”—a subset of hexproof that can protect creatures from specific sources.

The promos from to Dominaria were also spoiled last week. Opt returns as a Friday Night Magic promo, complete with a unique frame. Cast Down, an instant that for 1B will destroy a target nonlegendary creature and the new legend Shanna, Sisay’s Legacy also appears as an FNM promo with the unique frame.

The store championship promo is Steel Leaf Champion and the winner’s playmat features Teferi. The Magic Open House promo is an alternate, full art Llanowar Elves, and Zhalfirin Void, a land that taps for colorless and has scry 1 upon entering the battlefield, is the promo for store leagues. Finally, Zahid, Djinn of the Lamp is the Draft Weekend promo. The article also includes the packaging art for Dominaria.

There is one more promo available in Dominaria, the Buy-a-Box promo. Firesong and Sunspeaker is a legendary creature that will be Standard legal but it only appears as a Buy-a-Box promo. The only way to acquire the card is to purchase a box through a Wizards Play Network store.

The unique nature of this promo did not sit well with the wider player base. There were fears of scarcity and the precedent such a printing set. While Firesong and Sunspeaker may not be the most powerful card in Dominaria, it has the potential to be hard to find.

Mark Rosewater responded to the concerns on his personal blog. He closed his remarks by saying that he has heard how unpopular the promotion is and that the “powers that be” are aware.

Brawl was introduced on March 22nd. It is a 60-card casual format that will use the Standard card pool. Designed for multiplayer, it can also be played as a 1-on-1 format. The rules are similar to Commander. Before the game, a legendary creature or planeswalker is designated as the commander and it starts the game in the command zone. Each time the commander leaves play it can be exiled to the command zone and can be recast at the additional cost of 2 colorless mana for each time it has reentered the command zone. Decks can only contain cards that match the color identity of its commander.

No more than one copy of each nonbasic land card can appear in a deck—Brawl is a singleton format. There is no commander damage in Brawl. Each player starts with 30 life.

Brawl will allow players access to a casual, multiplayer format that has a lower barrier to entry than a format like Commander, which draws on the entire history of Magic.

Starting #GPCol and #GPBol on the weekend of 4/28, the GP champion's trophy will look a little different. This classic cup could be yours if you win the event! pic.twitter.com/JQsaIJCXRy

Grand Prix Kyoto took place last weekend. Featuring Team Trios Constructed, players selected a Standard, Modern, and Legacy deck to battle. Despite a bevy of talent on display, the Top 4 featured relatively little high profile experience with only a handful of Grand Prix Top 8s scattered among those players in the elimination rounds. After the dust settled, it was Ryouichi Yamamoto, Yuusuke Matsubara, and Kazuki Takamura who were able to hoist the trophy.