Welcome to another edition of New Technology, a column where I analyze the most interesting new card choices from tournaments last week. This week, I’m going to focus on the SCG Invitational and Open, which are the first competitive events we have with the new set. Here are the best new additions:

Jacob Wilson won the tournament with a pretty standard build of Abzan Control (or Abzan Midrange, if you prefer, but I think of it as a control deck so I use that name). The main difference between his deck and the accepted builds is the use of Sidisi, Undead Vizier:

Everyone recognizes Sidisi as a very good card, but most people didn’t think about playing her in a deck with so few expendable creatures (i.e. no Caryatids, no Sidisi Zombie tokens). Jacob has 16 total creatures, but only Wayfinders are bad—the rest are creatures you generally don’t want to sacrifice, though Sidisi can exploit Soldier tokens from Elspeth. Even so, he played Sidisis, and they were good for him. It turns out that it’s often going to be worth sacrificing a Courser of Kruphix or even a Siege Rhino to find a specific bullet (and you can do things like sacrifice Rhino for another Rhino). Sidisi enables a toolbox of removal spells, with Utter End, Ultimate Price, and Murderous Cut all being good in different situations, as well as the use of sideboard silver bullets like End Hostilities, Ugin, Back to Nature, and Virulent Plague. I think Jacob Wilson’s deck illustrates the point that for Sidisi to be good, you only need to be playing a couple of creatures, and very few have to be expendable. I think his approach is correct and I would expect most people to adopt Sidisi in all the decks that can remotely support her. 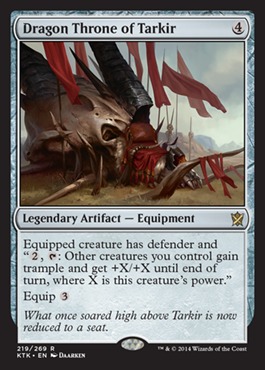 The GW Devotion mirror match in the finals of GP Miami wasn’t a matchup that people necessarily expected—that deck was kind of new, after all. After that tournament, however, it was quickly popularized, and it’s now the dominant devotion flavor. Since the mirror match takes so long and you’re bound to see a big portion of your deck, people have tried to come up with all sorts of 1-ofs to get an edge. Solutions I’ve heard of include Grindclock, Altar of the Brood, a black splash for Erebos, and more. Chris Andersen managed to surprise everyone with his mirror tech: Dragon Throne of Tarkir:

The idea behind Dragon Throne of Tarkir is that you add a big amount of mana, play it, equip to some guy, use the ability, switch to a different guy, use the ability again, and so on. Then you attack with several 15/15 tramplers and they just die regardless of their life total. It’s an interesting idea, and kills on the spot, but ultimately I think other options are better. Dragon Throne is immune to Reclamation Sage, but it’s not immune to Ainok Survivalist—they can just unmorph it as it’s being equipped and then it does nothing. If people lean toward Survivalist (which is better with manifest but worse with Genesis Hydra), then your trump does nothing, so I’d prefer something else.

UW Heroic is a deck that I’ve never particularly loved, because I feel like it’s trying to do a lot but the payout is not that big. After your entire “combo,” you get a 6/6, which is not much better than what other people can do for 3-4 mana and one card. Joe Lossett got 1st place at the Standard Open with a slightly tweaked version:

Joe is splashing red for Temur Battle Rage, and that’s a change I like very much because it finally feels like you’re getting a payout for all your troubles—now you can actually kill them! Center Soul is another new addition, and lets you push through for damage two turns in a row while also making sure you don’t commit Temur Battle Rages to a guy that is going to die. My only regret is that if they respond to Battle Rage with a red spell, then you have to make it fizzle by giving it pro red, but you don’t care much about the damage spells since your guys grow so big. Black removal is a lot more relevant and that you can easily stop. I could easily see red in heroic becoming the new norm.