It’s finally happening! On Monday we learned that Magic has a Netflix animated series currently in the works. It’s been 26 years coming, but it appears at long last the world’s greatest TCG will have its own series.

One big concern many fans may have about such a project is that it would be cheaply or poorly made. Who can forget 2000’s Dungeons and Dragons movie… Oh, wait… everyone!

What Can We Expect From the MTG TV Show?

The project will be overseen by a superstar team: it starts with Joe and Anthony Russo (MCU Avengers: Endgame fame) and brings several exciting names into the production fold including writers Henry Gilroy (Star Wars Rebels, Clone Wars) and Jose Molina (The Tick, Agent Carter) as well as Bardel Entertainment (Rick and Morty, Teen Titans GO!) for animation.

All things considered, this is an amazing collection of collaborators that immediately dispels my worries that there is much chance for the project to outright fail. I love the move to bring in Gilroy from Clone Wars since I think that show specifically did an exemplary job of appealing to fans of all ages while also being true to Star Wars fandom expectations.

Even worse than a Dungeons and Dragons fail, in my opinion would be a Yu-Gi-Oh! program geared toward selling product to preteens, but that also seems impossibly unlikely considering the quality of the talent already brought on board. It doesn’t make sense to hire talented people to make a terrible product.

There are a lot of reasons to be excited in anticipation of the upcoming project, not to mention the fact the show is poised to bring MTG to entirely new demographics and fans!

What Do I Want to See on Screen?

Netflix has an impressive track record for exceptionally high-quality shows; Stranger Things, The Umbrella Academy, and BoJack Horseman are among the best shows I’ve watched in the past couple of years and I am genuinely hoping to see this level of innovation and creativity brought to the MTG multiverse.

One of the coolest things about a MTG series is that the franchise has a tremendous backlog of untapped (pun intended) stories, fluff, and flavor never before seen on screen and an already dedicated fanbase. In many ways, this is analogous to making the first-ever comic book movie.

Since there is basically no available information about what the series ‘will be’ outside of the fact that it is happening and some of the names who have signed on, I thought it might be a fun to discuss what we’re hoping to see on the screen. I’ll start with my wish list and look forward to hearing what the readers are hoping for in the comments.

What Worlds Will We Visit?

More so than the characters or the narrative, the thing I’m most excited to see is how the multiverse is portrayed on the screen.

“We have been huge fans and players of Magic: The Gathering for as long as it has been around, so being able to help bring these stories to life through animation is a true passion project for us.” – the Russo brothers

I’m elated Wizards has chosen to team up with acclaimed individuals who are also importantly fans of the franchise. As a lifelong fan of MTG, I certainly don’t want a Magic series that doesn’t feel like it’s about Magic!

For the past 26 years, the lion’s share of the imagery that informs how we imagine the Magic universe looks and feels has come through the wonderful illustrations on the cards and I’m most excited to see those concepts brought to life, moving, and explored in real time.

Specifically, I’d love to see the Russo Brothers’ take on the mechanical hellscape of Phyrexia, the fantasy metropolis of Ravnica, and I’m actively hoping to see the landmark sites of Dominaria. I could rattle off 30 places that I’d love to see explored on the screen, but I’ll stop with my top picks. Rendering these iconic locations and settings in a way that is true to the flavor but brings that flavor to life will be the thing I’m most hoping to see done in an epic way.

Who Will We Root For?

Given the small amount of available information regarding the project, there is room for rampant speculation about what it will look like.

It makes a lot of sense to me bringing in the Russo Brothers could mean a Gatewatch team-up series, where a group of super-powerful but highly flawed planeswalkers (i.e., super heroes) get together to fight for a cause larger than themselves. The entirety of the Magic storyline is so expansive the project could end up being anything, (Even a boat, Lois! You know how bad we’ve always wanted a boat!), but we do know the Super Russo Bros. have a proven track record with this archetype given the success and popularity of The Avengers franchise.

One of the biggest strengths of the Avengers is the quality of casting and character development. The Bronze Age of comics has always been my favorite, it’s what I grew up with and I still love going back and reading material from that period. With that said, some of my favorite characters from the Marvel Cinematic Universe are the ones I’ve tended to find the most blasé in the comics.

For instance, anytime Thor would show up in a comic and the narrative centered around Asgard, it typically meant it was time to switch to a different title. He’s easily my favorite MCU Avenger, even though I always thought he was boring and one-dimensional in the comics, and it has everything to do with how the character is written, interpreted, and cast for the series.

I think it is a safe assumption the planeswalkers from Magic will be featured as central characters in the storyline as they have been the focus of the larger storyline for years. One of my biggest criticisms (and why I’ve largely abandoned reading the novels) is I find the characters extremely contrived and uninteresting. One of the biggest strengths of the MCU, in my opinion, has been writing characters that I didn’t care about in a fresh way that makes them significantly more engaging. I have a lot of faith the Russos will find a way to really bring these to life, if that is the direction they choose to go.

Another option is to go back to basics….

My favorite piece of Magic fiction is 1994’s Arena, which I read as an 11-year-old back in the day (and redeemed for an Arena card!).

Before it was an online play platform, it was the first-ever MTG novel. If you haven’t read this yet and are looking for a recommendation, it’s a fun read. The basic premise centers on a very different Magic narrative: It begins with a kid on Dominaria who has the gift to be a mage and chronicles his journey from a small town nobody into an aspiring tournament wizard.

While I doubt we’ll get a story like this in the first Netflix release, I’d love to see some of the old lore explored in the future (assuming the project is a soaring success, which I assume it will be). My new goal in life is to live long enough to watch: Magic: The Gathering – The Brothers’ War: A Netflix Original, at some point in my lifetime. The Weatherlight storyline would also be a sweet one to see at some point, and while not a populist pic, I also thought the entire Kamigawa storyline was A+.

Another thing I’d like to touch on is Magic has an incredibly large and diverse audience of tens of millions of fans. I’ve seen it estimated somewhere between 20 and 38 million. One element of the MCU I’ve greatly appreciated over the past few years is a move toward dramatically improved and better-rounded representation of how race and gender are written and portrayed in superhero movies.

The MCU doesn’t feature any LGBT characters, although they have announced future plans to do so, and I’m curious if the Magic series will venture into this. Magic has a strong LGBT following and I’m curious if this will be addressed or explored. I hope to watch a show that isn’t just a targeted fantasy for straight, white boys.

Who Will Be the Villain?

I’m going to assume that they will pick an epic villain for the project… but who? 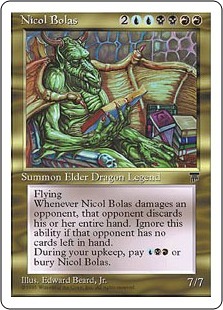 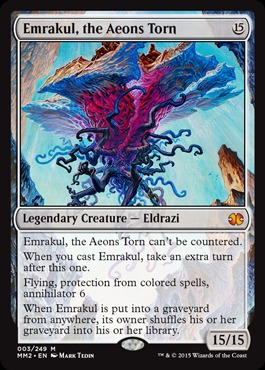 I’ll be a little disappointed if we don’t get either Nicol Bolas or Emrakul on the screen at some point, but there’s also the possibility that the forces of good will fight against a new evil to coincide with an upcoming expansion.

If they go with the latter, one neat way to write future series could be to release new episodes in concert with spoiler season for a new release to promote the story and set. Either way, I hope we’re going to fight somebody (or something…) awesome!

There is nothing more satisfying to a dedicated fan than a good, old-fashioned Easter Egg hunt!

The fact the Russo Brothers are longtime fans gives me hope we will see some quality Easter eggs throughout the series as a reward to Magic’s diehard fan base for decades of paying attention. While the initial series is unlikely to focus on the old fluff, I’m optimistic a show made by fans for fans will make plenty of references to cards both old and new. Off the top of my head, here are a couple of examples of the types of stuff that I would love to see.

No matter the direction they go, I’m sure I’ll be binging the show as soon as it hits Netflix. It’s exciting to see Magic finally infiltrating the mainstream. First via esports and now with a bigtime series with some major talent at the helm! Since there’s not much known about the project, other than it’s finally happening!!! Let’s enjoy the moment and use our imaginations.

What are you hoping for? What are you looking for? And, what would blow your mind from this project?

As a Magic fan, what would make the series an outright 11/10 for you? Feel free to share and discuss your own insights and thoughts in the comments.