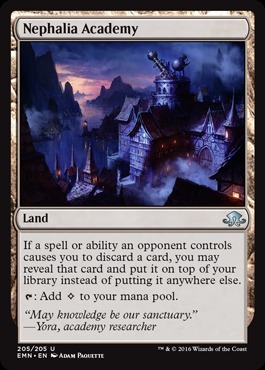 Decks like Ad Nauseam and Scapeshift have a great deal of trouble against discard, and this could be a nice way to fix the problem. How often do you have a Lotus Bloom with 1 suspend counter and Ad Nauseam + Angel’s Grace in your hand, only to have a Thoughtseize ruin your plans?

You might argue that Leyline of Sanctity is already available to protect these 2 decks from getting Thoughtseized, but Leyline has a sizable downside that Nephalia Academy doesn’t—it’s not a dead draw later in the game.

A colorless land doesn’t help Scapeshift fix its mana, but it’s still a land to add to the total count and helps you reach 7 in play more easily.

Ad Nauseam doesn’t really need colorless mana either, but considering that Ancient Grudge, Kolaghan’s Command, Abrupt Decay, and Stony Silence are going to attack your mana artifacts, sometimes you just have to manually reach 5-6 lands, which could be problematic in a deck with only 20.

Are you going to replace Leyline of Sanctity with Nephalia Academy?

I’m not sure. I want to try this out and see if the “put the discarded card on top” is a big downside or just a small one. Sometimes Ad Nauseam not only needs to draw its 2-card combo, it also needs to draw mana sources and you can’t protect everything—you have to let something go to actually get your draw step.

I played Ad Nauseam a bit and hated Leyline of Sanctity. I played against Jund four times and never opened with Leyline in my hand. I mulliganed to 6 looking for it, but then you can’t go deeper if your 6 is good enough. You’ll find yourself with four 4-drops ready to be revealed whenever you want to cast Ad Nauseam for value, which is a common play against Jund.

What about Legacy? Is this card playable in Mono-Blue Show and Tell?

I don’t think this card belongs in Legacy.

There aren’t many discard effects around, and Leyline of Sanctity protects you from ANT’s Tendrils of Agony as well, which makes the card way better than Nephalia Academy. Combo decks are also really fast and you don’t have time to play a colorless land and not a cantrip, even in a mono-blue deck. Brainstorm already does the job pretty nicely.

Overall, I think this card has potential in Modern, though I’m not sure if it’s actually better than Leyline of Sanctity. It’s at least a valuable (and cheaper) option.

I’ll leave you with the deck list that Alessandro Casamenti used to win WMCQ Rome, which had 260 players. He defeated Jund in the last game of the finals on the back of a Leyline of Sanctity in his opening hand. Would Nephalia Academy have granted the victory has well?