Last weekend was an exciting one for Magic! The Mythic Invitational attracted tons of eyeballs and showcased the exciting world of #MTGArena on the largest stage Magic has ever known. It was a nice little complement to the March Madness NCAA tournament. I don’t know if that was intentional, but it was fun to flip back and forth. Kudos.

But that was only the second most exciting piece of news in MY MTG world…. it turns out that my LGS has brought back weekly Legacy night, which means I will finally have a place to play Eternal MTG on a regular basis. To make things even better, the event allows proxies, which means that there is legitimate potential for the event to grow larger than just the players with extensive reserve list collections.

Don’t get me wrong—I’m a huge fan of Arena and play often. I’ve enjoyed the past six months of Standard more than most formats. The past three or four Limited formats have been terrific. With that being said, there is something sweet about Paper Eternal formats that I simply don’t feel for Arena.

Magic: The Gathering Has Already Changed

It’s kind of funny. As the game pushes hard in a new direction (Arena), I find myself drawn back to older options.

“Magic is changing” has become a huge narrative because it’s really, really obvious that sweeping change has occurred with regard to how and what we play. With that being said, I don’t see these changes as people being forced to throw out what they love about Magic and replacing it with with something they don’t. I see these changes as simply creating more options.

I’m hoping Magic continues to grow and become more mainstream accessible. I hope that more players means larger crowds for the great niche formats, as well as Eternal. It may seem counter-intuitive to think Arena could benefit Eternal formats, but more Magic players isn’t a bad start. Despite its financial obstacles, Eternal formats like Legacy continue to hang in there thanks to a devoted core of fans and players. And for good reason, since these formats offer a unique blend of history, nostalgia, and strategic depth that are unparalleled in other formats.

Change even comes to old formats like Legacy. Since the DRS banning, the format has shifted significantly into what appears to be one of the healthiest and most open metagames I’ve ever seen in an Eternal format, which is worth discussing in and of itself!

Perceptions of the Mythic Invitational as a Viewer

I thought the Mythic Invitational was an exciting moment in Magic history. 64 sponsored players competing for a million dollar prize pool is unprecedented.

Another aspect of the event I appreciated and enjoyed was that the viewing experience was very good. It’s simply easier to watch an Arena match than a paper match and no amount of pining for the good old days will ever change that.

With that being said, I did feel a bit of a disconnect from what I was watching on Twitch. The speculative and controversial stuff aside, (which I thought was a significant distraction and greatly overshadowed the viewing experience), the format itself felt a little too different for my tastes.

I thought the Duo BO1 Standard format was an interesting, but strange, choice for a high profile event for a couple of reasons:

First, it’s not a format regular people play and so, as I’m watching the biggest cash purse event of all time, it’s for a format most people have never played. One of the cool things about tuning in to watch a Grand Prix on Sunday night was seeing the new technology and strategy unfold, and looking forward to trying it out during the week.

For the biggest cash event of all time, I didn’t really feel there was a ton of applicable information to be gained or learned from the parts that I watched. I was basically watching stock Arena BO1 lists smash into each other. The Top 16 (32 decks) featured: 11 Esper, 6 Mono-Red, 5 Mono-White, and 5 Temur Reclamation.

4 decks, 85% of the winner’s metagame. Anyone who has played more than a few hours of Arena ladder has seen this ad nauseam.

The big twist on BO1 was in choosing two decks, which doesn’t appear to be significant to how non-invitational players approach the game. Also, not relatable, since the majority of players watching don’t have any background with the format.

To layman viewers, such as myself, the format looked exactly like the decks I’ve already seen in BO1. As for the “twist” of picking two decks, it appears that the popular trend was to pick an “all-in aggro deck” and a control deck tuned to crush “all-in aggro” decks.

The thing I found most enticing about BO1 was being forced to lock into 60 cards that had to be able to take on the whole field and I felt like giving players the option to take two decks made that feel less significant.  I could easily be wrong about that—maybe it was great for the strategy, but because it’s not a format I’m able to actively play, it’s hard to tell.

I like BO1 Standard and Limited on Arena as a casual way to jam some games, but I wasn’t blown away with Duo Standard as the format for a 64-player $1,000,000.00 event. You’re welcome to disagree with me, that’s just the impression that I had of the viewing experience.

The Event Made Me Think About What I Value About Magic

While I spent the majority of the weekend spectating various tournaments, I also got a chance to do a little gaming and metagaming of my own!

I’m not only excited about local Legacy. It turns out a local LGS also started doing weekly Chaos Drafts at FNM. I’ve always been a fan of wacky formats, but I haven’t done much Chaos drafting over the years.

I went 3-0 with a pretty slick little R/G Beats deck. I can’t even remember the last time I won FNM before this, but it was a lot of fun.

Well earned too, because I passed on the opportunity to Rare Draft a $35.00 Avacyn,, Angel of Hope in favor of a lowly Phantom Tiger. 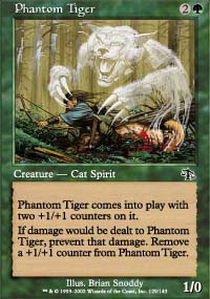 Let’s talk about Legacy for a second because the format looks nice. In particular, the last time I was watching Legacy, the format had gotten really stale. DRS-based blue decks were pushing 20-30% of the metagame and had a higher Top 8 conversion percentage than the other options. Not ideal.

What a difference banning a 1cmc planeswalker makes! Check this out:

I haven’t seen a Legacy metagame distribution like this in a long time, possibly ever.

The top 10 most popular decks in the format account for only 41% of the metagame and 50% of the Top 8 metagame, which is a pretty open distribution of decks! It would appear that the bannings have really opened things up, which is exciting.

The two pieces of information that stand out to me at first glance about the format are the significantly higher Top 8 numbers compared to general metagame for U/W Stoneblade and Miracles. These will likely be the decks I’ll try out first, since the early data suggests they are top performers. It also doesn’t hurt that I’ll get to team up with Brainstorm, Force of Will, and Swords to Plowshares once again!

There haven’t been a ton of high profile Legacy events lately, which could account for how open the format looks. It’s also possible that simply removing Deathrite Shaman has allowed more strategies a chance to be viable. Either way, it’s a good thing. Actually, it’s a great thing.

Magic has been around for a long time and it didn’t survive 25+ years before Arena because people don’t like to hang out and play card games! Of course, I enjoy the way that Arena makes finding a game easy and accessible from home, but there’s also a part of me that has come to accept that hanging out with actual people and shuffling actual cardboard is, for me, fundamental to what Magic is. For newer players who were introduced to the game through Arena, perhaps that won’t be the case, and that’s cool too.

There’s no wrong way to play as long as you enjoy the games and formats you’re into. I’ll be the first to admit that while I was watching the Mythic Invitational I was a little weirded out by how different it was from what I’m used to, but at the same time I also had my laptop out and was scanning Legacy articles and metagame resources, working on Tundra decks. While it’s true that Magic is changing, some things will always remain comfortably the same.