Legacy Grand Prix are notoriously difficult to metagame for because card availability is a large factor, and players are priced into playing what they already have. On top of that, people have had years to develop pet decks, making recent metagame shifts less impactful than they would be in other formats.

Most people are best served playing what they’re most familiar with, but every time a Legacy Grand Prix rolls around, I get a number of “what should I play?” questions from people that aren’t familiar with the format.

This year, I listed off the same set of decks to everyone that asked. If you’re truly in the dark on what to play, I think they’re a level above other options because they’re powerful, proven, and can hold their own in a diverse field.

My first pick is the newest induction into Legacy’s tier 1, and it’s in the conversation for best deck in the format:

Over the past months, the collective has tuned and honed this deck very close to a stock list, which is perfect timing for people that want something to shuffle up and compete with.

It plays very similarly to its (now banned) Modern counterpart, with a few upgrades and tweaks.

Endbringer has a few Legacy-only applications. It matches up well against Tarmogoyf, it’s a sweet one to put into play off of an opponent’s Show and Tell (beats Emrakul, the Aeon’s Torn, anyway), and the pinging clears away smaller creatures while also giving you an out to Ensnaring Bridge/Moat.

Thorn of Amethyst is a useful main-deck card. People design efficient, compact curves in Legacy because they need to do things earlier than in other formats. Thorn punishes that well, hosing some decks and hindering others. Still, you can’t run too many lock pieces in the main because this is still an Eldrazi Mimic deck and you need to have enough creatures to consistently apply pressure.

I’ve seen a miser Tower of the Magistrate in some lists, which brings me back to when I first brought that particular bit of anti-Batterskull technology to light back in 2011. It was a little less random there because I could tutor it up with Knight of the Reliquary, but it’s also closer to a freeroll in Eldrazi’s mana base. Regardless, it still functions the same. Just target the equipped creature and the equipment falls off—presto!

My second choice is, in a sense, the definitive deck for people that want their deck to carry them. Sure it can get hosed, but so can anything, and this deck in particular is unparalleled in raw power (as opposed to cooked power, which is delectable but you lose all the vitamins that way). 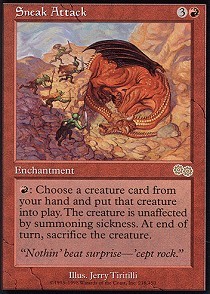 Sneak Attack and Show and Tell is good in a timeless, brutal way, and if your opponent isn’t specifically prepared for it, then they’re likely to get rolled over. Sure, hate exists. Aggro decks play Phyrexian Revoker when they might otherwise play something a little more intimidating, people sideboard Pithing Needle and Red Elemental Blast and even Ensnaring Bridge and the occasional Humility, all with Sneak and Show in mind.

Despite all the available hate, I strongly recommend this deck to people that don’t know what to play. Legacy isn’t a format where you can have “the fear,” or you’ll spend the rest of your days cowering under your bed, and this deck in particular has the highest chance to carry your indecisive self through a longer tournament.

I asked HAUMPH about the sideboard Kozilek’s Return, which is there to get around the protection from Mother of Runes. When you realize that Death and Taxes is a problem matchup for Sneak and Show, the ability to protect a random hate bear does seem relevant.

So long as Top is legal, Miracles will always be in the running for best deck in Legacy, and over the past few months it’s been absolutely crushing online.

Miracles has a dream mana base, an absurd level of consistency, the tools to fight any kind of deck it runs into, and now with Monastery Mentor, it can actually end a game in a reasonable number of turns.

I unabashedly lifted this list from MTGO results, and it looks exactly like what I’ve been facing online. 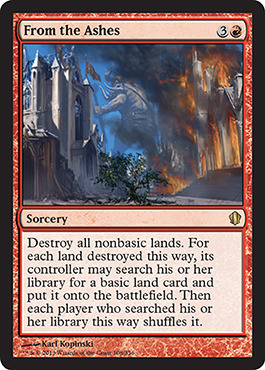 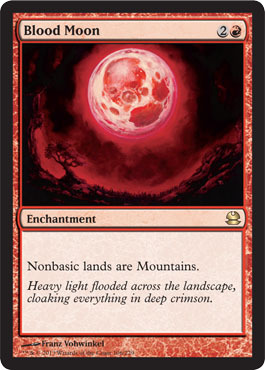 In the sideboard, I don’t hate the split between Blood Moon and From the Ashes as they function slightly differently. Blood Moon needs some setup because all your future duals and fetches are going to be worthless. On the other hand, you can lose a few duals to From the Ashes but keep your fetchland + Top engine in place. From the Ashes doesn’t lock Shardless out of the game like Blood Moon does, but it also doesn’t get hit by Abrupt Decay.

This next deck is the king of consistency:

Due to its redundancy of 1-drops, the tutor power of Green Sun’s Zenith, and draw power of Glimpse of Nature and Elvish Visionary, Elves is the most consistent deck in the format, which makes it particularly well suited for a 15-round event.

On top of that, Elves has a wide tactical ability thanks to various bouncing and untapping tricks, and a few different plans of attack. If the opponent answers one line of attack, switch to the next. You can win off a fast Craterhoof Behemoth on turn 3, or slowly with an Elvish Visionary (the “green Griselbrand”) grinding out value with Wirewood Symbiote, or a flurry of Symbiote-and-Quirion Ranger-plus-Deathrite Shaman pings.

Now, I wouldn’t feature Julian’s Chaos Elves over a Natural Order list if I didn’t think it had some distinct advantages. Julian knows Elves better than anyone, and this is his current build that he’s been rocking in the Legacy Mediocre League (so you know it’s good).

Here are a couple notes on specific choices:

0 Natural Order: Natural Order is a good card by anyone’s estimation, but it’s less good in an attrition battle and post-board, people tend to bring in cards that hose it (like Grafdigger’s Cage). Rather than continue boarding out Natural Order all the time, Julian cut them entirely, and he’s had some success without them.

1 Shaman of the Pack: Gives the deck another form of reach and combines well with Wirewood Symbiote. Delver has a hard time racing Shaman, and it can force Miracles to Terminus during your first main phase, letting you use Gaea’s Cradle mana to rebuild.

1 Wren’s Run Packmaster: Packmaster is a medium-range Green Sun’s Zenith target that hits a sweet spot between Craterhoof Behemoth and Elvish Visionary. It’s strong against Bolt and Abrupt Decay, it’s a sink for Cradle mana, it single-handedly overwhelms board positions, and if you champion an Elvish Visionary, you can get value even if it does die. Because Wren’s Run Packmaster gives all its Wolves deathtouch, it’s particularly backbreaking against larger threats like Tarmogoyf and Eldrazi.

If I was to extend the list, it would also include Shardless BUG, Grixis Delver, and maybe Death and Taxes. There’s a good argument for Lands being better positioned than usual, but I’ll never recommend that deck to anyone. If you feel the urge to play Lands, instead try buying a book of Sudoku and puzzling it out at the bus stop, and that way we’ll all have a more pleasant tournament.