I don’t ever really write about Commander. Much of my public Magic identity is based around the competitive formats played at high-level tournaments, and I never really felt Commander was my “lane” when it comes to content creation. With the creation of Riley’s Rules of Order, however, and the upcoming CommandFests, I’m more than happy to put myself on record as a filthy casual and share the 100-card stacks I like to rumble with.

On today’s #RileysRules, @StillJfef gets an important lesson on including a win condition in your Commander deck. On behalf of his playgroup, thank you, Mr. @rileyquarytower Sir.

Right now, I have four decks built. A Knights deck, obviously, a Four-Color Blink list, a highly political list with Oloro, and a weird deck based on my favorite dinosaur, Zacama. I play in a group with a pretty low power level, with a few house bans–no Sol Ring, no obnoxious infinite combos (Adam is the final arbiter of what “obnoxious” is), and, sadly, no Reliquary Tower. Thanks, Duncan.

All the same, my four decks cover a wide spectrum of power level (described relative to my play group), although none are as optimized as they could be. Bear that in mind while reading, and if you’re tempted to pick one of them up, you are of course free to improve them with Sol Rings, fetchlands, and the like. 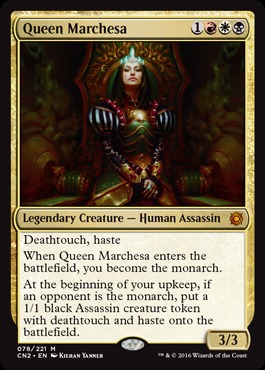 Until Throne of Eldraine, the commander of this deck was Aryel, Knight of Windgrace. Now that the Knight tribe is solidifying its position into the Mardu colors, however, it’s time for a change: Queen Marchesa–long may she reign–steps in to personally lead my people to victory. I considered Syr Gwyn, of course, but as she wants you to play a more equipment-centric list, she’s not a good fit for my approach.

As you can see in the list below, this is a deck primarily focused on “Glorious Anthem” effects, as they’re known (despite not actually playing the card Glorious Anthem). With a stack of ways to generate Knight tokens as well as cards like Knight Exemplar and Boros Charm, this deck is able to fight through Commander’s ubiquitous sweepers, and I expect the new cards from Eldraine to juice this list up even further.

Obviously, any creature-based Commander deck is going to have a tough time against big Simic decks that don’t care about the board, or white decks that play every sweeper under the sun. Against the latter, we have token generators and indestructible effects, against the former we have… well, we mainly have the hope that other people will deal with the problem. Not always the best strategy, but hey, sometimes it works.

This isn’t a hugely powerful deck, but that’s fine, for several reasons. I find it really useful to spread out the power levels of my respective Commander decks, so I’ve always got one that’s appropriate for any given play group. This one is right towards the bottom end of that spectrum, but again, that’s fine. It makes me happy to make little vigilant 2/2s, and every now and again you can sneak in a win by appearing weak and so being underestimated. Not a very knightly way to win a contest, but hey, it works.

Just remember: you don’t need anyone’s permission to play a “bad” deck. I got stuck in the mindset that it’s “incorrect” to play anything other than the very best possible deck in every format at all times, a mentality that I think a lot of competitively-focused players fall into. You are allowed to build a silly Knight deck, or a Cleric deck, or a deck based around some dumb card you have a soft spot for. If you enjoy yourself while playing, win lose or draw, that’s all that matters.

Kynaios and Tiro of Meletis 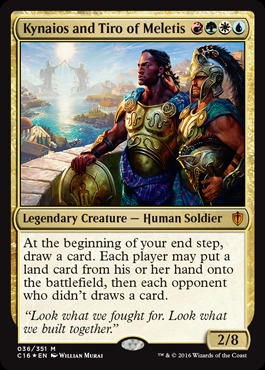 Don’t worry, it’s not a group hug deck! This list actually began life as a Roon of the Hidden Realm deck, kicked off by my long-standing love affair with Restoration Angel and Thragtusk. Flickering creatures for fun and profit has always been something I’ve loved doing, and I managed to incorporate an engine that an old friend, Stephen Campbell, introduced me to: Ghostly Flicker and Archaeomancer.

Slowly but surely, this deck became leaner and meaner, more focused and optimized, until I was never casting Roon. As any Roon player will tell you, Roon sucks, and I won’t be surprised when the Rhino is completely eclipsed in Commander by Chulane, Teller of Tales. I decided to add red, which allowed me to incorporate Izzet Chronarch, Purphoros, and Imperial Recruiter (not to mention Kiki-Jiki, which has house-rule errata “non-Restoration Angel creature”). I cut Roon and instead started playing my boys, Kynaios and Tiro of Meletis.

Commander: Kynaios and Tiro of Meletis

This deck is quite consistent for a Commander deck, with a stack of two-drop “draw a card” creatures as well as a powerful early ramp suite. It’s extremely mana-hungry, so you want to play and blink creatures that search for lands early and often to set up for your huge late game. That late game is enabled by the overwhelming value engine that is one of the five Archaeomancers in conjunction with one of the five Ghostly Flickers. You use the Ghostly Flicker to target the Archaeomancer and another creature to return the Ghostly Flicker to hand, and in doing so generate incremental value while hopefully messing with your opponent.

My favorite creatures to endlessly blink like this are Mystic Snake, Knight of Autumn, and Duplicant, each of which deal with a different kind of problem and provide endless frustration for your opponents. Past that, however, just dumping mana into blinking a Thragtusk over and over again feels incredible, and even flickering a humble Wall of Omens is a great time.

Eventually your creature-based tutor suite allows you (given enough mana) to win most games from any position. With a Recruiter, you fetch Fierce Empath to fetch Avenger or ’Hoof (or both, with a blink effect), or if you need to assemble your engine you can use Fierce Empath to instead get Woodland Bellower, which then gets Eternal Witness to return a Ghostly Flicker effect. Other ways to get ’em dead quick are, of course, Purphoros triggers, or a good old-fashioned Genesis Wave for a squillion.

I’ve deliberately not included the Deceiver Exarchs and Pestermites of the world due to our house rule against infinite combos, but that is an option for you if your playgroup allows it. Both Imperial Recruiter and Recruiter of the Guard can fetch Kiki-Jiki, which will offer you further consistency with this combo. Alternatively, if you want to get a bit sillier, include cards like Mirror March and Mindclaw Shaman to power down the deck a bit.

This is my all-time favorite Commander deck and chances are if you ever challenge me to a game you’re going to get Archaeomancer’d out by this list!

Next week I’ll be back with my Oloro list–which is unlike most Oloro decks, I assure you–and the weird take on Zacama I brewed up as well. Until then, let me know what you think of these lists, or if there’s anything you think I could improve. With almost 20,000 cards available to play with, I’m certain I’ve missed something!