Fate Reforged isn’t exactly a barn burner as far as Constructed goes, especially after the powerhouse that was Khans of Tarkir. That was one of the fastest bans I can remember and Treasure Cruise eating it in every single format wasn’t exactly in the plan.

All I’ll say about Modern right now is that I’m unsurprised the cards I thought would get axed did, and Birthing Pod probably also had it coming. I would’ve liked an unban or two more as well, but overall I’m pretty happy with the announcement.

With that said, let’s jump right back into going through Fate Reforged—new decks to try out and tweaks to make to existing decks.

Flamerush Rider is one of the more interesting cards to mess around with from Fate Reforged. You almost never want to actually cast the Rider, instead just utilizing dash to turn it into a Ball Lightning effect. Most interesting about it is just how good copying other creatures is.

I was interested when I thought I just had double 3/3 attackers (Which as it turns out, you don’t), but copying an Ashcloud Phoenix or Butcher of the Horde is a big game. In fact, with just a single big threat and removal you can dash out Rider and end the game in a single turn. Compared to the other 4- and 5-drops the body doesn’t measure up and certainly isn’t better than Butcher of the Horde. So you’re playing it entirely to combo off and kill people or trigger [ccProd]Wingmate Roc[/ccProd].

As a backup to decks focused entirely on winning via evasive beats and Chained to the Rocks, however, it starts to look pretty interesting. You just need the opponent to assume their best plan is to win via racing, then clear out the Courser or Rhino on defense and dash out a Rider.

I’m starting with Boros since the mana base is more manageable and doesn’t cost you much in the way of power. You still hit your giant evasion creature quota and have a lot of cheap ways to take out Siege Rhino and opposing flyers.

I’ve talked about Flamewake Phoenix in conjunction with Butcher of the Horde, and you can definitely build aggro Mardu. I’m not going to jam another list since right now I haven’t gotten any further than just slamming it in anything with Bloodsoaked Champion and a bunch of giant fliers. At this point I need to figure out if that’s worth play 3-color. 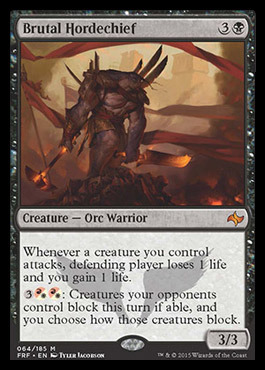 Brutal Hordechief is another card that I’m quite interested in. While Mardu is one of the easy spots to add it, another place to try it is Abzan Aggro. Why there? People are focusing heavily on the token abuse aspect and considering the combat control ability merely as a bonus. Abzan asks, “what if we focus on the fact that an active Hordechief basically dominates the board with nearly any of our creatures?”

You still get the free pings, and forcing creatures in the way of a Siege Rhino is one of the better feelings you’ll experience. The biggest problem is that Hordechief is on a really brutal spot on the curve.

Return to the Monastery

A few people teed off on my initial review of Monastery Mentor in Jeskai Tokens and my attempt to put it into Heroic. The issue I see is that a lot of the initial builds just slotted the Mentor directly into existing strategies without building around it. So far the best Monastery Mentor decks I’ve seen are built entirely with Mentor as the focal point.

Unfortunately, when I look at these decks I think it’s possible you’ve just built a worse UW Heroic deck that takes longer to actually win the game. Time will tell on that one, since there’s quite a bit of deck space to explore with Monastery and the proper amount of cantrips, removal, and other threats. So any sort of optimized list is probably at least a few weeks away.

As far as Jeskai Ascendancy decks go, I’m less interested in what Monastery Mentor can do for me and a lot more interested in Refocus and Humble Defector. If I’m being honest, I don’t have high hopes for the latter because the odds of Defector surviving in the current format are so low, but it also may push the number of must-kills high enough to offset this weakness. Refocus on the other hand is exactly what the doctor ordered, it plays every position as a heroic enabler, cantrip, and a way to generate an extra mana while digging.

While the deck is pretty tight as it is, shaving a little bit of the fluff and the weakest of our heroic enablers allows us to upgrade on the whole. Right now I’m only gold fishing the deck and I can say that, at least in a sterile environment, the extra cantrips help significantly.

If you run the 5c version of Ascendancy then I can understand being happy about Mentor and running it either as a sideboard plan or secondary win condition. Despite having a bit of white in the deck, I don’t like boarding in more cards that die to everyone’s normal sideboard plan.

Sticking with the Old Plan

Of course maybe you already bought your Abzan deck and are happy with smashing Siege Rhino into every problem until it gets banned. That’s OK! Abzan is still a powerful strategy and while there aren’t a lot of cards gained it should match up well against the majority of new strategies. Sticking with an older deck with minor updates has a lot more validity than normal because this brew period won’t last.

Some people are throwing out the old chestnut that we’re spewing on new cards to sell them. On some level that’s the goal of articles in the first place and why we get paid, however the main reason is because if we don’t try things real quick we won’t have time.

Do you know when Dragons of Tarkir comes out? Two months from now. We will have practically no real time with this format so either stick with what you know and make sure to keep up or go wide and come up with a totally new plan. This is why my time is going to be spent on UB Control, Jeskai Ascendancy, and Mardu. The whole format is going to receive another shakeup after only 5-6 Opens and a handful of GP events.

By the time the metagame is established for this format, everyone will be gawking at shiny new cards from Dragons and how X and Y are better than ever while Z will be looking for new digs. I want to try a lot of new things because the next six months will be several compact Standard seasons, and PPTQs make finding good one-week tech relevant again.

That’s why my last article was focused on what UB Control gained and that’s the deck I plan to focus on the most for right now. I still have to try out the Jeskai Sage build before commenting, but I can say that the Ugin addition makes a big difference. Of course, the card costs roughly a billion mana so it really should make a major impact when it hits, but having additional sweeper effects and a real kill condition is invaluable for UB Control. Next week I plan on following up once I have a fair number of games in.

Until then, I just want to leave off with a thank you to everyone who attended the CFB prerelease this weekend. It went incredibly well and I’m thrilled that we had nearly 800 entries for a small-set release. Thanks a ton and I hope to see you all for Dragons of Tarkir!