A few weeks ago, I featured some of the spicy brews showcased during the Good Morning Magic segment of GP Prague’s coverage. Given that we had another Modern GP this weekend—this time in Stockholm—and given that people seemed to enjoy being set on fire by these squillion-Scoville brews, I’m happy to present Good Morning Magic 2: Electric Boogabrew. Let’s get to it!

Jeskai Ascendancy spawned a weird 4-color combo deck shortly after it was printed, which put up some results here and there before fading into relative obscurity. You would think that banning Gitaxian Probe would be the final nail in the coffin. Nils Gutierrez von Porat is here to put it back on the map, however, this time without Noble Hierarch and Sylvan Caryatid.

The fundamental goal of the deck is to land a Jeskai Ascendancy and use it to untap Fatestitcher multiple times, generating mana and burning through cantrips until the Fatestitcher can one-shot the opponent, (tapping down any remaining blockers before doing so). With Ascendancy and Fatestitcher online, every cantrip—Opt, Serum Visions, Sleight of Hand, Thought Scour, Visions of Beyond—replaces itself when it comes to both mana and cards, allowing you to churn through your deck.

It only gets better from there. A second Fatestitcher will allow you to generate mana with cantrips, Faerie Conclave acts as a weird fifth Fatestitcher, Pyromancer Ascension gives all of your spells extra bang for their buck, and due to this deck’s velocity, eventually Visions of Beyond will act as an Ancestral Recall. Finally, Lightning Bolt, Path to Exile, and Remand offer important early disruption.

This deck will doubtlessly catch people off-guard, especially those who weren’t around a few years ago for the original. I like to see that the wrong-footing strategy continues post-board. With Monastery Mentor and Young Pyromancer, this deck can transform into a go-wide strategy with a) no reliance on the graveyard and b) resilience against spot removal. I always keep decks like these in the back of my mind, as you never know what’s going to break out next in Modern.

There are those who believe that fun is a zero-sum game. The perfect deck for someone like this has to be 8-Rack, a deck that mercilessly attempts to prevent its opponent from playing any Magic whatsoever. Jarno Niinisalo might be one of these players who want to have all of the fun for themselves, as he piloted 8-Rack in Stockholm this weekend.

If you haven’t seen 8-Rack before, here’s what’s up. On top of the usual Inquisitions and Thoughtseizes, 8-Rack goes all-in on tearing opposing hands to shreds with Raven’s Crime, Wrench Mind, and Liliana of the Veil. From there, even a single copy of The Rack or Shrieking Affliction will eventually end the game. 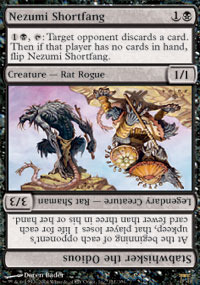 This list is, strictly speaking, 9-Rack thanks to the inclusion of Nezumi Shortfang, and there are a few other important 1-ofs. With the preponderance of creature decks, diluting the discard strategy with Bontu’s Last Reckoning and Ensnaring Bridge is a wise move, as you can’t afford to fall behind to an aggressive start (Fatal Push also helps in this regard).

Raven’s Crime makes it difficult for this deck to flood out, and both Mutavault and Hostile Desert constitute a solid plan B. Dark Confidants take advantage of the fact that opponents will board out their removal for game 2, while Leyline of the Void is must-include technology against decks like Bridgevine and Hollow One.

Back in the day, Scapeshift decks used to be Temur almost by default: they would run Remand, Izzet Charm, and even Cryptic Command as interaction that helped churn through the deck. These days, blue has been dropped to make way for Primeval Titan and more ramp spells, but Love Janse has other ideas. Nevermind 2- or even 3-color Scapeshift—what about four colors with Bring to Light?

People have experimented with Bring to Light in Scapeshift decks before, but this is the most all-in approach to the converge strategy I think I’ve ever seen. In this list, Bring to Light is everything from a ramp spell to point removal to a hard sweeper. We’re back to the good, old-fashioned playsets of Remand and Cryptic Command, with plenty of other disruptive elements like Lightning Bolt and Anger of the Gods. Effectively, this is a control deck with a combo finish, all tied together with the mighty tutor, Bring to Light.

Naturally, relying on a 5-drop centerpiece is risky business in Modern, so a healthy ramp package supports this endeavor. This means, however, that a wide range of silver bullet answers can be played across the 75, as Bring to Light serves as four extra copies. Bringing in a single Crumble to Dust or Slaughter Games can tilt a matchup hugely thanks to the tutor effect of Bring to Light. Excitingly, it also allows for the Madcap Experiment/Platinum Emperion combo post-board—Bring to Light gives you virtually five copies of Madcap Experiment!

Having said all this, I’m not entirely sure what this deck is trying to achieve. This weird marriage of ramp, control, and combo seems to bite off a fair bit more than it can chew—it only plays ten Mountains total, which is very few for a Valakut deck, and Bring to Light isn’t a great combo with either Remand or Cryptic. Then again, Bring to Light is the sort of card that begs to be broken, so maybe this is the starting point.

Off-the-wall brews continue to be one of my favorite things about the Modern format, and GP Stockholm clearly demonstrated that wonderfully weird decks can thrive (Mono-White Martyr in the Top 8? Sure!). With Guilds of Ravnica and Assassin’s Trophy sure to shake things up, I’m keen to see what the next crazy developments in Modern will be.