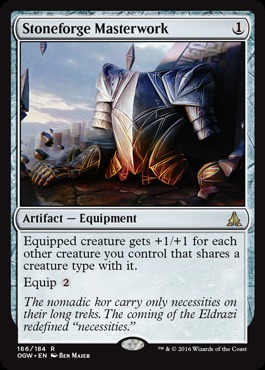 Stoneforge Masterwork is exciting to me because it’s possible that it’s the single card Goblins needed to be competitive in Standard.

Normally any card that requires you to play an all­-creature deck with a tribal theme is so restrictive because the deck is terrible when faced with mass creature removal. Stoneforge Masterwork should change that drastically, since any creature in the deck that picks up the equipment is a threat that needs to be dealt with immediately.

The fact that Dragon Fodder and Hordeling Outburst both provide multiple Goblins from one card is huge for making this deck work. It’s not at all out of the realm of possibility that Stoneforge Masterwork can give a creature +5/+5 for a relatively cheap cost. I can even imagine games dragging on with board stalls and a big turn where you use Subterranean Scout on a Goblin Piledriver and then equip it, dealing 20 damage in one shot.

Goblin Dark­-Dwellers is another spicy addition from Oath of the Gatewatch that slots in perfectly. It’s a Goblin so it’s going to work well with Stoneforge Masterwork and Goblin Piledriver, but it’s also just great with a Hordeling Outburst or Dragon Fodder. It’s a build-your-own Siege-Gang Commander. It can even be much better than that in games where you want to flash back Exquisite Firecraft. You can play Hordeling Outburst multiple times, and in those games having 6 Goblins—plus Dark-Dwellers equals 7—can fuel the Goblin payoff cards in a big way.

I can see being skeptical of a Mono-Red deck in Standard that doesn’t play Monastery Swiftspear or Abbot of Keral Keep. That’s understandable and outright justifiable. I will say that while this deck is untested, it’s worth keeping an eye on. Goblin Dark-­Dwellers provides card advantage in long grindy games in a way we’ve only seen from Abbot of Keral Keep. As a deckbuilder, it’s a huge advantage to push certain strategies to the extremes to see how strong they can possibly be. You might realize that Stoneforge Masterwork is totally busted and you don’t have any need for Monastery Swiftspears anymore.

It might look like I’m bending over backward to accommodate a new card, but I don’t think that’s what’s happening here—I have played Mono-Red decks in Standard with Goblin Glory Chaser and Mardu Scout before and I’ve found them to be serviceable cards. 2 power for 1 mana is great, as is 3-power-plus-haste for 2 mana. They have merit on their own, so it’s not as if I’m playing all horrible cards hoping to get by on synergy alone. I feel these cards could easily win a game by themselves without having to draw the decks’ namesake cards.

For Pro Tour Magic Origins the reprint of Goblin Piledriver got people excited, but it never quite found a home. I don’t see any reason why it can’t be a commonly played card today. I used to play with this card in Legacy and it was amazing. It might sound a bit silly, but any card that gets played in Legacy clearly has a high power level, and just knowing that is reason enough to start putting it in Standard decks. Context is important, but with Dragon Fodder and Hordeling Outburst it’s clear to me there is something there.

So the first reaction I might expect to hear is to remind me of the Drown in Sorrow reprint: Flaying Tendrils. I can’t argue against that, it’s a great card. That’s how Magic is though—there’s a great creature deck and there are sweepers. Finding a good balance of how to beat it is all the fun.