Raise your hand if you like decks that play 19 Swamps. That’s what I thought. Swamps are great.

Mono-black is a fan favorite archetype in any format it occurs. There is something uniquely classic and straightforward about harnessing the power of basic Swamp.

There is a reason I own 20 matching Korean Revised Swamps. I go back to mono-black from time to time…

There are moments when mono-black decks have been center stage in various formats. The Torment Black deck is a deck that people loved and talk about to this day. Zombies Aggro recently won a Standard Pro Tour. And, in Pauper, mono-black is a mainstay of the format.

I’ll play a random mono-black deck even when it’s bad, so it’s quite a treat to battle with one that is actually good.

Let’s start with the list, which comes courtesy of Jon Wilkerson:

Let me begin by saying that the deck is finely tuned. Despite having to mulligan a lot due to one-land 7s, I was able to go undefeated in games. The deck flowed well and was able to execute smoothly regardless of matchup.

The quantities in the deck are straightforward. Inclusions that don’t feel obvious are smartly chosen. I’ll get to those in a moment, but I’d like to start with the general strategy. 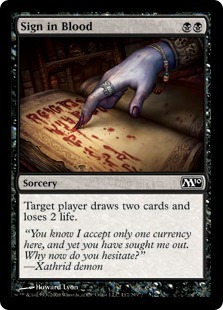 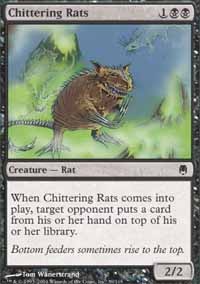 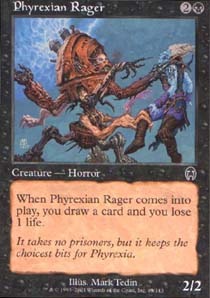 Mono-Black is difficult to run out of gas because the core of the deck is so efficient at recycling itself into a stream of threats and answers.

The deck also has a lot of cheap removal to keep the board clean and allow its value bears to chip away over the course of a longer game. 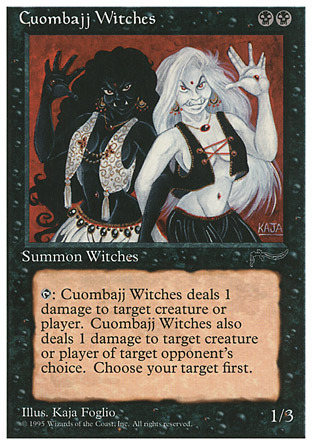 Witch one should I play?

Dusk Legion Zealot has replaced Cuombajj Witches in Jon’s build of the deck. They are very different cards and do very different things but both share one thing in “common” (Pauper pun!) in that either needs to lock down the 2-drop slot.

The deck has a plethora of options at 3 but not a ton of solid 2s. Personally, I like the Zealot and the way it sort of plays to the smoothness of your draws6. Witches are much better against decks like Mono-Blue Delver that have a lot of 1/1 Faeries to ping down. I don’t think that a 3-1 split in favor of Zealots is off the table, either.

The deck is undeniably midrange in every way. Despite the fact that I know Jon has put a lot a of work in and wins a lot with it, I had my doubts. The biggest reasons I had doubts was because of how the deck positions itself as “true midrange—come and get me.”

There’s no leaning fast or slow. The deck is just smack dab in the middle and proud of that fact. Traditionally, when midrange decks are great it is because they crux hard on super efficient and powerful spells.

Jund decks that are full of Bloodbraid Elf and Broodmate Dragons or Abzan decks with Siege Rhinos and Abzan Charms are the playbook for midrange successs.

I look at the Mono-Black deck and I’m not seeing and Bloodbraid Elves or Siege Rhinos. I see a bunch of Grizzly Bears that draw a card.

The moral of the story: Never underestimate a bunch of cantripping Bears!

The reason the deck “works” and is “good” is that it actually does have a super powerful payoff card:

Does this card feel like a common? Not really. It feels decidedly like an uncommon in terms of the way it impacts that game. I suppose that was even true in Theros Draft formats where “Gary” was a format-defining card because it was printed at common. Mono-Black is happy to have the card leading the charge.

It can deal gigantic amounts of mana. It also buys a ton of time when you are on the defensive by gaining life and providing a great blocker in combat. It also fuels the second Gray Merchant, which is often a game-ending play.

You’re cycling through your deck by playing creatures that generate card advantage and using them to trade with opposing creatures or punch through damage. Your removal helps clear the path. And Gray Merchant finishes the opponent off.

It’s also nice that Gray Merchant helps break up “fog locks” against various control decks, which is one of the reasons the deck packs a single Corrupt: 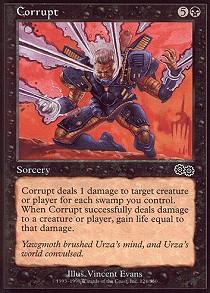 I would love to have Gray Merchant number 5 but the rules simply don’t allow it. Corrupt is pretty sweet because it is like having access to an additional copy of Gray Merchant but it is even more sneaky since it’s hard to account for the damage. I can have 0 Devotion to black and still Corrupt for a large number and most players won’t see that coming. 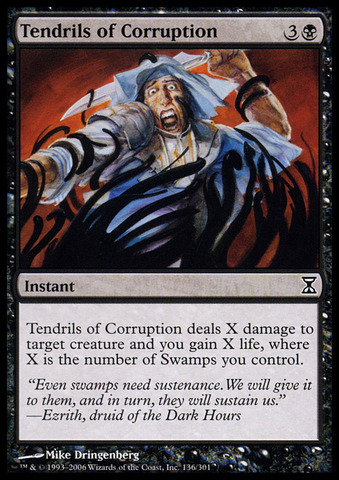 Tendrils is another singleton to punish various aggro decks. As much as I love the Tron deck, it has serious issues with decks that blitz hard because it doesn’t have consistent early interaction. The Mono-Black deck (or even the straight U/B Teachings deck I wrote about two weeks ago) has way better tools to stave off hyper aggressive decks. Tendrils is just another card that can help close the door on a Red deck or Stompy deck.

There are a lot of positives about Tendrils as a one-of but it is a little bit mana intensive. The Tendrils spot could be shaved in order to make room for a Cuombajj Witches. The deck feels a little light on 2-drops and Sign in Blood isn’t a very good 2-drop on the draw when you keep 7 cards (since you’ll have to pay 2 life and discard a card to hand size).

The sideboard has a lot of tools to help grind out decks that have more card draw than the average deck. 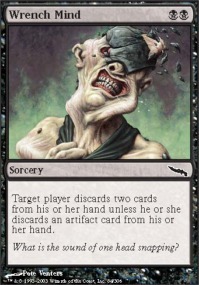 One of black’s strongest suits has always been discard effects and you have them in spades here. I like Wrench Mind in the sideboard (despite the fact that it is a justifiable main-deck card) simply because there are several top tier decks that have a lot of artifacts (Tron, Affinity, and R/W).

One of the reasons I don’t mind having too few 2-drops too much is because Wrench Mind helps solidify that spot, which really increases its value as a sideboard option. It’s nice on the draw (where Sign in Blood is bad on 2) since your opponent will be starting down a card.

I’m not boarding Sign in Blood out on the draw (in fact, it’s not a card I would sideboard out often), but the Wrench Mind gives me a good card to have in my opening hand that I can cast on the second turn so I can play Sign in Blood later without having to discard to hand size.

Jon also has the full suite of Choking Sands to help combat grindy decks with a lot of bounce lands and Tron.

Aside from that, there are a few more situational removal spells in the board as well as a pair of Nihil Spellbombs that are great for grinding value against the control decks that utilize graveyard synergies. Spellbomb also shines against Reanimator decks.

Budget Discussion in a Pauper Article?!

One of the weird discussion points about Pauper is the steadily rising price of Oubliette. 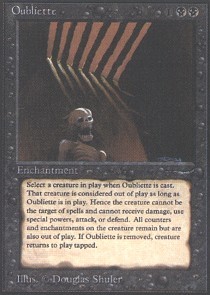 Copies appear to be selling in the $40-$50 range, but severely played copies can be had a little cheaper. Still, this is fairly expensive for an all common format like Pauper. It’s not only that Oubliette is expensive, the card is actually pretty difficult to find. Chances are that most game stores don’t even have the card in stock, which means that buying online will be the only option.

Masters 25 would be a nice place to see an Oubliette reprinting to help lessen the burden of this format staple. Whether or not the card gets a reprint is still to be seen.

If you were thinking about playing the deck, but are not thrilled about spending close to $100 on a playset of Oubliette, I don’t blame you! There are certainly budget substitutions available but I don’t believe that there are any that are equal in utility. The big upside to Oubliette is that it is an unconditional removal spell (it hits anything that can be legally targeted in the format) that sits in play and counts toward devotion to black for Gray Merchant.

Another strange upside to Oubliette that many people don’t know comes as a result of its bizarre archaic wording. It turns out that in addition to exiling a creature it also exiles all Auras attached to that creature. It may not seem like a huge deal, but Rancor is one of the most played cards in the format and earning an easy 2-for-1 is a big game.

It costs 3, but you get your money’s worth in terms of flexibility and upsides. 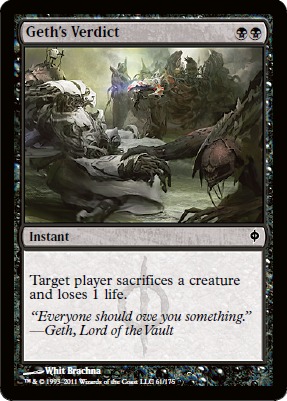 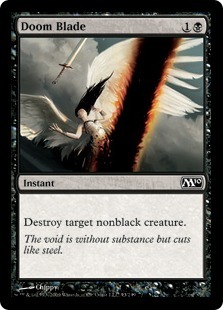 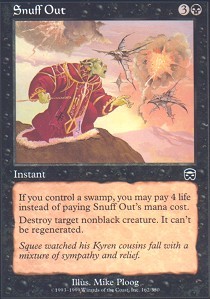 Let’s be clear. The deck isn’t “good” because it has Oubliette. The core of the deck is in the creatures and Gray Merchant. Oubliette is just the best “flexible removal” to occupy those particular spots in the deck. It can be replaced, but the deck would not be built optimally.

Let’s just hope that Oubliette is included in Masters 25 or some other upcoming set because it feels ridiculous to have to discuss budget options for a Pauper deck. It also seems like a decent card that could be included in a Commander deck of some kind.

So, yeah, if you don’t have Oubliettes and are interested in the deck you’ve got two options: Look for a good deal on Oubliettes or find a temporary sub-optimal budget substitution until the card is reprinted somewhere.

Aside from the awkwardness of attaining Oubliettes, the deck is a blast to play and quite strong. The thing that impressed me most was the smoothness of the draws and efficiency with which I could interact with my opponent.

There was a big difference between playing Mono-Black and the Teachings and Tron decks I’ve written about the past few weeks. The control decks were undeniably powerful, but they were difficult to play. I frequently found myself scratching my head and trying to think myself through complicated sequences that involved doing six or seven things in a row. Several of my matches went to time. Mono-Black was quick and more enjoyable play.

The deck certainly has that “mono-black feel” going for it and gets to play some of the most iconic mono-black cards ever: Chainer’s Edict, Gray Merchant, Duress, Corrupt, and even Swamp (always a fixture in a solid mono-black list!).

So I’m basically 100% for enjoying every Pauper deck that I’ve touched so far. The format is great—the games are fun and interactive, and there is a 19-Swamp mono-black deck that is fun to play. What more can a Magic fan even ask for?