“Pioneer is great! You should play Pioneer!”Over and over, it’s the same positive narrative.

If you’ve been on the fence about getting started, but don’t know where to start… you’ve come to the right place! Over the past few weeks I’ve been working on learning the format, and today’s article is geared toward jumping in and getting started.

For me, it was never a matter of if but when. My biggest concern about getting into Pioneer has been investing time and money into learning decks when the Ban Hammer was swinging in a particularly cavalier manner. Now that B&R has slowed to a trickle and we have a clearer idea of what the format is and will be, I’m much more excited to join the game.

All things considered, I have good things to say about the format so far! It strikes a nice balance between Standard and Modern that resonates positively with me. Unlike Standard, the format is sufficiently large and offers more diversity of strategy. Unlike Modern, the cards share a more coherent vision for design where paying mana and casting spells share a stronger correlation, i.e. there’s less broken stuff happening for free and the metagame less defined by combos. Pioneer hits the best of both worlds for me as a Constructed format where it amplifies the things I like about Modern and Standard, and softens the parts I don’t.

With Mono-Black being a known strong deck in the format, it was an easy choice for me to hitch my Pioneer wagon to. It’s one of my favorite archetypes to play, and the fact that it is also such a strong option puts the strategy into the double bonus for me.

Today, I’ll be sharing my build of Mono-Black as well as some basic strategy for playing the deck in the format.

A major strength of the archetype is efficiency and flexibility. It’s aggressive enough to pressure any deck in the format, but it doesn’t need to rely on racing other aggressive decks to win. In fact, it is deceptively good at grinding opposing aggressive decks out of the game!

The deck doesn’t outright crush many strategies, but it doesn’t have many horrendous matchups either. The fact that Mono-Black has a lot of close matchups makes it ideal for learning to play the format, since you’ll gain a lot of experience no matter what you’re up against.

My version of Mono-Black is a little bit more midrange-y than a lot of the stock lists: 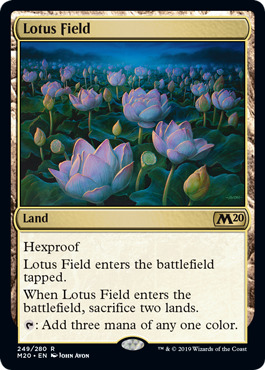 “The Top of the Mountain.”

When we talk about what the Pioneer format looks like, it’s important to take into consideration where and how we are playing. At the most competitive levels, data suggests the tier 1 Pioneer strategies are Lotus Breach, followed by Sultai Delirium and Dimir Inverter.

Lotus Breach and Dimir Inverter are both combo decks while Sultai is a strong performing graveyard synergy midrange deck.

If you are an experienced competitive player looking to compete in high level events… First of all, why are you reading an intro to playing the format article? Second of all, it just makes sense to play one of the three broken decks in the format. Lotus Breach, in particular, had absolutely obscene numbers at the Players Tour, comparable to Hogaak at Pro Tour Barcelona. If the goal is to compete at the highest levels, it’s foolish not to play that deck!

I’m certainly not an expert on the intricacies of Pioneer, but many of my professional player friends have suggested potential bans of the premier level combo decks could be incoming. As a result of that information, for an introduction to learning the format article I can’t in good conscience suggest players buy into strategies that are on the borderline.

With that being said, at the lower levels of play I’ve seen and experienced a ton of diversity in my gameplay and have actually found various aggro decks to make up a large chunk of the field in my matches.

I also don’t want to imply that Mono Black is some budget brew… It’s not! Despite not making Top 8, it was a solid and consistent performer at the Players Tour and put up Day One numbers tied for the fourth best deck in the format alongside Bant Spirits.

I can’t even believe how insane this card is! A big selling point of the Mono-Black deck is the consistency and raw power of its mana base. As great as Castle is, it’s still a humble second to the mighty Mutavault!

The biggest drawback of Mutavault is that it only provides colorless mana. Not only is Aggro Black mono-colored but it also has Urborg, Tomb of Yawgmoth to help offset the slight cost of putting such an insane land into our deck.

Another natural boon of Mono Black is a powerful, flexible and efficient core of great spells:

Thoughtseize is likely the single best card in the format for the cost. Fatal Push is the most efficient removal spell. Ebon Legion is in the running for best 1-drop.

The pure efficiency of the deck is fantastic and rounding out the remaining cards with cheap creatures that return to play from the graveyard is a nice way to leverage our natural advantages.

I’ve found both of these cards to be actively great. Secondly, I think they are both well positioned against a wide array of matchups and have a lot of natural synergy within the larger strategy.

Aetherborn doesn’t exactly light the world on fire against combo and control but it’s an absolute house in aggro mirrors. The format has a lot more shocks than bolts which makes its 3rd point of toughness a hot commodity.

Redundant access to Duress is obviously fantastic against control and combo decks, but it tends to play nicely with Aetherborn against aggro. A turn-1 discard spell to take a removal spell to clear the way for a turn-2 Aetherborn can wall up a game right from the start and bridge us into Castlevania time!

Of all the “fair” decks in the format black is actually decent against the Bogeymen. We have a fast clock backed up by a lot of disruption. What can I say…? Thoughtseize is a heck of a card!

Building a good sideboard is a huge part of having a successful strategy.

Against aggro, because we have Castle Locthwain (which is essentially a Swamp already suited up with Underworld Connections!) I generally want to board my worst defensive creatures (Scrapheap and Bloodsoaked) for removal. I want to force trades, protect my life total, and cruise to victory with Castle Locthwain.

My sideboard cards are specific for the most popular matchups.

Leyline is insane against Delirium and Dig Through Time decks. 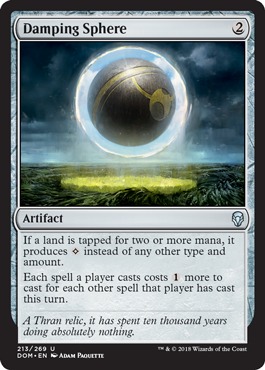 A bullet for the Lotus Breach deck.

An extremely useful tool against both of the combo decks that use creatures as part of their combo. 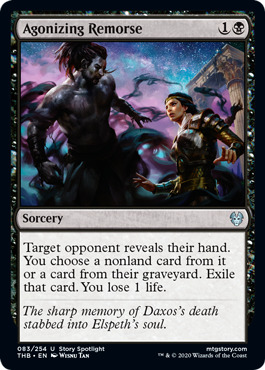 If my opponent is not beating me down (combo or control) I’m bringing these in to rip away my opponent’s important spells while I bring the beats. 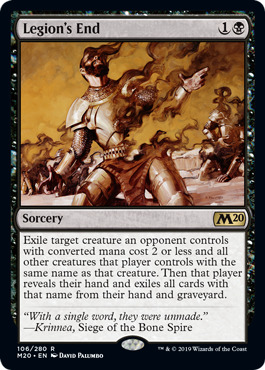 I’ve found Legion’s End to be the best “anti-fast-beatdown” sideboard card. It deals with recursive creatures in the mirror, it’s a potential 2-for-1, and it can deal with Ensoul Artifact on Darksteel Citadel. 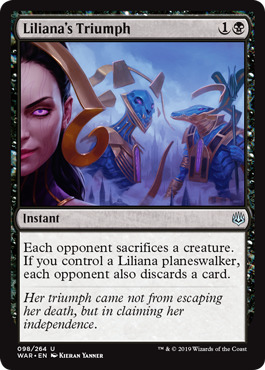 I wanted something to help deal with hexproof creatures, and this works. I’ve seen a lot of Self-Inflicted Wound but I found myself wanting access to Edicts against other strategies such as Big Red as well. 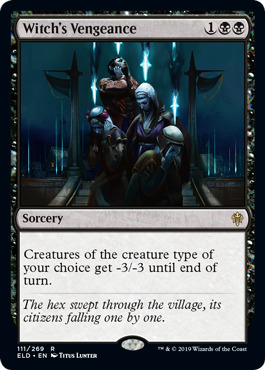 Plague Wind against Bant Spirits and other rogue tribal decks.

When I’m boarding into my more midrangey look against aggro decks, I’m happy to bring this in as my threat. It’s extremely good in a race and lays down some fantastic blocks. It’s very easy to crew with so many 2/1s in the list (as well as Mutavault!).

The biggest selling point for Mono-Black is that it is legitimately a strong deck that is fairly straightforward to play. For example, I haven’t played a ton of Standard or Modern in the past year because it’s just not my thing, but as a result I’ve found myself a little rusty about knowing all of the commonly played new cards across the popular archetypes.

I’m starting to get the hang of it, but having access to a bunch of Thoughtseize really makes life easier on me and has allowed me to win a lot more than I really thought I would starting out. As a player who was a little bit late to join up for the party and is still feeling things out, the ability to take a gander at my opponent’s hand and see what they are up to is a type of value that is hard to even quantify!

While the DCI has occasionally made ban moves that leave me scratching my head in confusion, Mono-Black Aggro is a safe deck to put together and learn to play. It’s certainly not the bogeyman of the format and its best card, Thoughtseize, is always a nice fail-safe in a large format where broken decks are likely to emerge over time.

Mono-Black was my choice to make my introduction into Pioneer and overall it was a positive experience for becoming acquainted with Magic’s newest, hottest format! If you’re thinking about trying the format out, it’s pretty sweet and I highly recommend it.