I was all set to play this deck two or so weeks ago, but then I ended up finding cooler and cooler decks. Truth be told, this is an archetype that is near to my heart, as I feel like the cards contained within are pretty magical in Modern and do a great deal against a great many decks. Things like Chalice of the Void, Blood Moon, and Ensnaring Bridge just end games against certain strategies.

The specific version of the deck I’m looking at today comes from Michael Coyle, who took it to a 17th place finish at the SCG Open in Richmond a week ago. 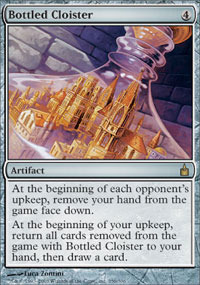 Oh man, Bottled Cloister. If that’s not a trip down memory lane, then I don’t know what is. This is definitely a unique way for red and white decks to draw extra cards, as well as protect their hand from discard spells, but boy does it make me nervous. If they kill your Bottled Cloister while you have cards underneath it, well, those cards are gone forever. That’s a pretty terrifying proposition in a format with so much bounce and removal.

Other than that, I worry about the lack of threats. I love Elspeth, Sun’s Champion and the combination of Nahiri, the Harbinger and Emrakul, the Aeons Torn, but I wonder if that’s going to be enough. I don’t even have any creaturelands, like Needle Spires, and I don’t have any reach other than 3 Lightning Helix. You’ll also notice that things like Path to Exile and Lightning Bolt are absent, presumably due to their conflict with Chalice of the Void.

My biggest issue with the deck coming out of these matches is that… well, it does nothing, which scares me in Modern. It’s basically the Null Rod of decks.

“But it doesn’t do anything.”

This is basically how I felt as I was piloting the deck. I could draw all the Ensnaring Bridges and Blood Moons, and Chalice of the Voids I wanted, but at the end of the day, I had very few ways of actually closing out the games.

I think decks like this are amazing in certain situations, but they give the opponent way too much time to survive and get out of the jam you’ve put them in. Every matchup felt like I was able to stifle their efforts a bit, but I would then give them turn after turn to draw Cryptic Command, Liliana of the Veil, or All is Dust. I know how to punish the greed of Modern decks, I just don’t know how to take advantage of that punishment, and that’s where this deck kind of drops the ball.

If you look at it, you only have about five win conditions, maybe nine if you want to include the Chandras. That’s not a tremendous amount, especially considering eight of those win conditions need about three turns to be “turned on.” And that’s assuming you don’t actually need to use any of their minus abilities.

This deck is likely pretty good against creature decks, but not the counters deck or anything black-green with sufficient answers. I also don’t imagine I need to tell you how bad it is to have 3 Wrath of God, 2 Anger of the Gods, and 4 Ensnaring Bridges against decks like Jeskai Control, Storm, or Ad Nauseam. You’re basically giving them a bye! And Blood Moon barely affects those decks!

While I’m thrilled for Michael that he hit 17th place, I worry that R/W Prison currently has too many rough matchups in Modern to be a legitimate contender right now. At the very least, it should add a few more cards to close out games and remove a few cards that are durdling too hard.

Thanks so much for reading and I’ll catch you later!