This week I’m taking a look at a deck suggested in last week’s comment section by Petr Halas! Thanks, Petr!

While some version of the Krark-Clan combo has remained in Modern even after Second Sunrise was banned, this version takes it to the next level with new cards like Sanctum of Ugin and Scrap Trawler, the latter of which really puts the deck on the map. If Mashi thought Mox Opal was on the Modern chopping block before, he better hope this deck doesn’t take off. Let’s take a look at the plan.

This particular version was used by Magic Online user discoverN to some success. The basic plan is to power out a Krark-Clan Ironworks as quickly as possible, along with some cheap artifacts that cantrip, then land a Scrap Trawler. The Trawler allows you to get back a card for every artifact you sacrifice, netting you ever more cards and mana. Eventually you’re able to either play Emrakul, the Aeons Torn from your hand, or cast a Myr Battlesphere, crack a Sanctum of Ugin, search up an Emrakul, then cast her.

Once you add the 5 Myr bodies to the board, mana shouldn’t really be an issue, but I never had to sacrifice any of the creatures once I started “going off.” Let’s see if I can show you what I mean.

Unlike most combo decks I try out, this one has some redundant pieces that you can easily swap out for sideboard cards, which is super convenient. Unfortunately, in my opinion those cards are the quite expensive uncommons from Coldsnap—Mishra’s Baubles, which are nearly the price of Mox Opal now that I check. The Opal is typically the better card to get back over and over again with Trawler, especially since you won’t be drawing Bauble cards until the next turn. Typically you want to win the next turn, not draw some delayed card, especially after Trawling shenanigans.

If you watched the videos, you should have a good idea of how the combo works, since I won every game with it (you know, considering it’s almost impossible to win any other way). It was also obvious that I was getting better and better at it as I played the deck more. I still made some mistakes when I was rushing, but the general idea and repetitions became more and more familiar. 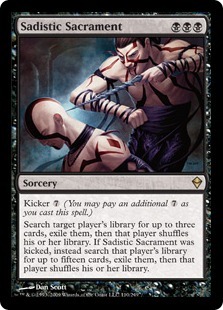 As you could tell from my comical first match, some cards are extremely effective against this deck, like Stony Silence. I also imagine if a player were to cast something like Sadistic Sacrament, you’d pretty much be unable to win since they would nab your Emrakul and the 2 Myr Battlespheres. Sure, you could try to aggro them to death with 4 Scrap Trawlers, but that seems a little ambitious. The point is that you only have 3 cards that can win the game, and 2 are a little suspect. All of these factors combined, I’m surprised I managed to do as well as I did. Truth be told, the deck is really efficient when it’s “going off.” It just becomes especially hard to whiff when you manage to get an Ironworks and a Trawler in play at the same time.

One funny thing is the inclusion of Tendo Ice Bridge over the arguably better Aether Hub, but in this deck… they do the same thing. Either land would have a single activation. This was also one time I was pretty content with a deck’s sideboard. I felt like I was able to utilize every card at least once aside from the Grafdigger’s Cages, but that’s simply because I didn’t face a deck where I needed them.

I was impressed with this list, make no mistake. It felt powerful, and it wasn’t a deck you wanted to tap out against. If you have the means, I would recommend giving it a shot. Outside of the Baubles and the Opals, the deck is actually somewhat inexpensive!