I’m going to be real with you guys: I have no idea what I’m playing today. I mean, I’ve selected the deck, and I know the cards it contains, I just… have no idea what it is or how it managed a 5-1 finish in the Modern Challenge in the hands of Magic Online user airfarmer. Ideally, these are the kind of questions I want to answer in Modern Monday, as I try out some of the most obscure decks and possibilities in the format.

While the deck in question bears some striking resemblance to previous decks with white enchantments, it’s also completely different from anything else I’ve ever seen. So much so that it actually took me a bit to figure out how it wins and what it’s even trying to do. See for yourself, and let me know what you think.

Eventually, I figured out that the deck basically wants to put itself in a position where it can never lose thanks to Worship, Privileged Position protecting Worship, and all of my creatures having hexproof. Being able to back everything up with Heroic Intervention is also a nice touch. “How do you win?” you might be asking. (Nah, just kidding—you likely already figured it out.) Well, I’ll tell you! Simply make a huge Ormendahl, Profane Prince with my Westvale Abbeys. I guess you could deal 20 with your lone Courser of Kruphix, but who has the time?

The deck has some truly interesting choices here, some of which I’m not sure I agree with, but as usual, I’ll play the matches before I pass judgment so I can at least pretend I know what I’m talking about. Let’s see how this bad boy plays in action.

The first thing that caught my attention (and did impact my games) was the 4 copies of Dryad Arbor. I can see the benefit of this when I’m trying to have creatures to sacrifice to Westvale Abbey or when I’m trying to keep creatures around for Worship, but it’s pretty rough. Considering that I’m running 25 lands, along with Mistveil Plains, that’s nearly 20% of my lands that come into play tapped—less than ideal when I want to play something like a Birds of Paradise or a Noble Hierarch on turn 1. 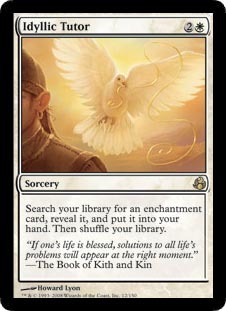 The distribution of main deck enchantments is strange to me. I have 4 copies of Idyllic Tutor, but every single enchantment in the main deck, of which there are 3 aside from the lone Courser of Kruphix, is a 4-of. With 4 tutors, why not have silver bullets against the linear strategies of Modern, like 1 Rest in Peace or 1 Ghostly Prison or something? Why not 1 Solemnity or 1 Greater Auramancy to grace the sideboard? I could even see Mark of Asylum against certain decks that only have burn to deal with your creatures, like Storm or Skred Red. Heck, having access to a single Oblivion Ring or even a Cast Out (which could allow you to essentially “cycle” your extra tutors) could be great. There are just so many good enchantments, I feel like I’m wasting potential here. 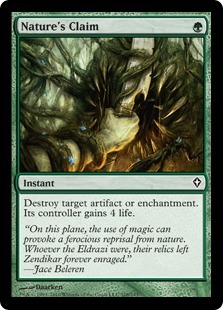 Speaking of which, I know Beast Within is a fantastic all-purpose answer, but something cheaper like Nature’s Claim is going to do exactly what you want for less mana. As usual, this deck has a hard time against things like Blood Moon and Ensnaring Bridge (how do you ever beat an Ensnaring Bridge?). You only have 2 basic lands and not a single Plains, but you do have a good amount of mana creatures, so that should help at least. I also realized after the fact that I could have stayed alive post-Anger of the Gods if I had searched for a Dryad Arbor with my previously drawn Wooded Foothills, but that’s life.

The deck definitely seemed sweet, but I’m a little suspicious of some of the choices. Perhaps you can tweak it a bit, and create something with real potential.

As always, thanks so much for reading and I’ll catch you later!