Welcome back to another Modern Monday! Hopefully you guys got the chance to hit up a prerelease and had a good time doing so. I actually managed to play in four of them, and got a pretty good feel for the format. Well, Sealed that is. Be sure to follow me over on Twitch to catch me when I start drafting Ixalan on Magic Online!

This week felt more difficult than most to pick out a deck. Nothing was really jumping out at me and it felt like I had already played everything I was coming across. Then I found two B/W Control lists that had done well recently. I picked the one that Magic Online user CharLy managed to 5-0 with.

As usual, I’d love to complain about there not being enough win conditions. The truth is that there are actually plenty, but with so many ways to discard and exile things in Modern, I think I just like having multiple copies of certain cards in Modern. 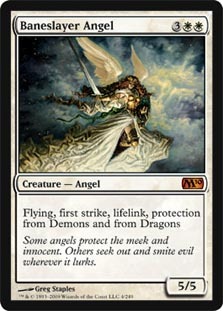 One of the main differences between the two B/W lists I saw was that one had a Fulminator Mage in the main deck over the Baneslayer Angel. That one also had a copy of Gideon, Ally of Zendikar, and a copy of Wrath of God in addition to the 3 Damnation. Personally, I like the version I chose, which I played a day later, a little better.

With the amount of discard in the deck, the goal is to control the game to a point where you can land something like a Baneslayer Angel or an Elspeth, Sun’s Champion uncontested. Let’s see if things work out that way.

Well, those were some impressive results. Despite not thinking I had very good game against Eldrazi Tron… maybe I did? Having a 2-mana card draw spell definitely helped the deck fit into the control role a little more easily. Having access to a good deal of life gain, from Shambling Vent to Baneslayer Angel, was also helpful. This deck seemed well-rounded, and I’m not sure there’s anything I feel needs to be changed.

As always, I do like spot removal for artifacts and enchantments in the sideboard. While I managed to absolutely crush them with Gideon of the Trials, if Lantern Control managed to land an Ensnaring Bridge against me, I’m hard pressed to deal with it. I like having access to Fracturing Gust, but having only one way to deal with things like Leyline of the Void, especially one that costs 5 mana, can be problematic.

While not especially relevant, I’ve always been fond of Relic of Progenitus in the main deck. At worst it cycles, but at its best it’s huge. Gideon of the Trials has been on a tear in Modern recently and, as you could see from my matches against Lantern Control and Burn, simply shuts down certain archetypes in their tracks. I was especially surprised at his impact in the Burn match, forcing the opponent to spend two burn spells on Gideon in order to have a chance.

This week, Ixalan releases on Magic Online, and I’m eagerly waiting to see which cards might end up in this week’s Modern deck lists before next week’s Modern Monday. Considering how many cards from each set have regularly been showing up in Modern, along with the number of Merfolk in the set, I have high hopes for Ixalan’s impact. Thanks a ton for reading and I’ll catch you next week!