But in all seriousness, while I played a deck with Blood Moons fairly recently, this one is a little different. And by that, I mean it actually has a good number of surprisingly powerful win conditions you might not expect. I’m always thrilled when I see a Modern deck find success with cards from sets as recent as Return to Ravnica and M15.

Reppin’ 4 copies of both the Draft nightmare Pack Rat and the Pro Tour M15 standout Goblin Rabblemaster, this deck has some of the most unique win conditions I’ve seen recently. The deck also has 4 copies of Dark Confidant, which are great here, along with 2 Mutavaults that work well in conjunction with your Rat- and Goblin-centric threats.

There was a Modern Challenge on Magic Online last weekend, and user Toshumotto, whom I’ve written about before, took the following beauty to a 6-1 finish.

Look at this beauty! I’m a big fan of the single Chandra, Torch of Defiance, and wouldn’t be surprised if she ended up being the next big planeswalker in Modern. I also appreciate that it’s the most expensive card in the deck for Dark Confidant purposes.

Unlike the R/W Prison deck I played, which also had an abundance of removal, this deck has a ton of powerful creatures that are all capable of making more powerful creatures. I don’t see any problems with closing out games with Pack Rat or Goblin Rabblemaster, especially with 6 main-deck discard spells that can help clear the path and 4 Blood Moons that can bottleneck opposing strategies. 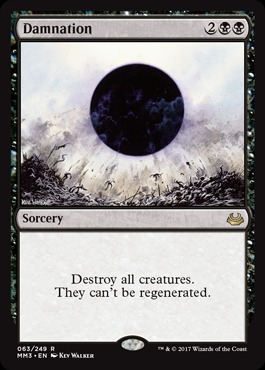 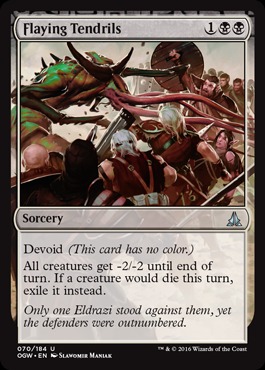 The sideboard is all over the place, though there is some overlap—Damnation, Flaying Tendrils, and Anger of the Gods all fill similar roles here. The 1 Grim Lavamancer is a little interesting, though. Anyway, let’s get on with the show!

Well, color me impressed. This is likely one of the most successful decks I’ve played on Modern Monday and I’ve played a ton. I did not see that coming and I even managed to catch a few of my own misplays.

Any time you’re playing a deck with Blood Moon, you have a good deal of decisions to make about how to sequence your land drops, which lands to get and when. You want to make sure you get 2 Swamps, but you also want to make sure you can cast spells that require red early, and you want to save enough fetches to actually get the Swamps… it’s a whole thing. Nevertheless, we made it through together, and that’s the important part. Can’t really say the same for my opponent, unfortunately.

Despite the sometimes tininess of my creatures, they got the job done. So did all the discard spells, truth be told, something that the R/W deck doesn’t have access to. Another perk of all this removal is that you can easily discard it to Collective Brutality or Liliana of the Veil if you’re facing a deck against which it isn’t necessary. I’m not sure I can get behind having only 2 Lightning Bolt in the main deck, but things did seem to work out. I might prefer a 3-3 split with Fatal Push instead.

All that being said, this is not the cheapest deck out there. With full near full playsets of Dark Confidant, Blood Moon, Liliana of the Veil, Verdant Catacombs, and Blackcleave Cliffs, this deck is getting up there in price. But it is fun and surprisingly successful. I highly recommend giving it a shot if you have the cards and you’re so inclined.