Modern Horizons features about one metric ton of themes. Some are more prevalent, and consequently much easier to build around and to draft around, than others. If you’re attending one of the GPs in Copenhagen, Washington D.C., or Seattle, you should know which are which. This is especially true if you plan to do some Drafts, whether in the main event or on the side.

Say you consider picking an early Astral Drift and drafting a sweet cycling deck, similar to what Astral Slide and Lightning Rift allowed back in the day. Then you should be aware that the average Modern Horizons booster pack contains …

This adds up to 1.05 cards per pack, which isn’t a lot considering you may want to cast some of your spells too. Onslaught had more than two cyclers per pack. Amonkhet had more than 2.5 per pack.

Astral Drift also is the set’s only payoff specifically for cycling. You have a 1.65% shot to find one in each fresh booster, and another 1.65% shot at Tectonic Reformation. But unless you get both, cycling probably won’t be a noticeable theme of your Modern Horizons Limited deck.

In Scout We Trust 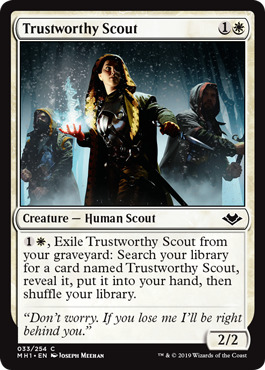 I have found the rate of cards per pack to be the most useful metric. I could tell you that the boosters of an average eight-person Draft will include 2.38 copies of Trustworthy Scout. But this number isn’t very helpful. It doesn’t reflect what the odds are to get a second when you already have one. The answer to this question is that each new booster comes with a chance of about 9.9% to contain another Trustworthy Scout.

Each common shows up at a rate of 0.099 per pack (rounded, the full decimal goes on to repeat two zeros followed by two nines ad infinitum). Individual uncommons are 0.0375 per pack, rares are 0.0165, and mythic rares 0.0083. This means that the average booster contains 0.0375 copies of every uncommon in the set—until you crack the pack there are three Schrödinger’s uncommons drawn from a pool of 80 uncommons total—and that the odds to pull a specific uncommon from a single pack are 3.75%.

Note that I wasn’t able to account for the existence of premium foil cards. This changes the actual probabilities, albeit very slightly, because the distribution of foil commons, uncommons, rares, and mythics follows the distribution pattern for their less shiny cousins. The drop rate of foil snow basic lands, on the other hand, remains a mystery.

King of the Pride grants all Cats a +2/+1 bonus. Scrapyard Recombiner can turn artifacts into Constructs. Yet you can search all the set’s type lines in vain for additional Cats or Constructs. You have to look one line down to find the changeling ability, which appears on:

0.182 payoff cards per pack aren’t tied to any specific creature type either and can benefit—and benefit from—most of the above. The 0.0083 copies per pack of Morophon, the Boundless and the 0.0375 Etchings of the Chosen let you pick any tribe. The 0.0375 copies per pack of Valiant Changeling don’t care about any one tribe, but the card makes for the best turn-two play after leading with Universal Automaton. I have also found that the 0.099 copies of Return from Extinction improve vastly if you have a couple of Changelings in your deck.

Let’s move on to the named tribes. Note that the following totals don’t include Changelings.

Cordial Vampire makes each dying creature bequeath a +1/+1 counter to all of your Vampires, of which there are 0.054 per pack. Squirrel Nest and Deep Forest Hermit add up to 0.054 cards per pack as well. Ayula, Queen Among Bears stands alone as the payoff for generating Bears, which 0.132 cards per pack do, often multiple times. Rotwidow Pack benefits a bit from the presence of Twin-Silk Spider, which brings the sum of non-changeling Spider cards to 0.1365 per pack.

0.504 Ninjas are hiding in the average booster. 0.075 of them care about this creature type, split evenly between Throatseeker and Ingenious Infiltrator. The total skews a little toward black as well. Not only are 0.236 cards per pack mono-black Ninjas, compared to 0.215 mono-blue. More relevant is blue’s lack of changelings to add on top.

Zombies aren’t far behind, and they’re all black. 0.405 cards per pack state their taste for brains on their type line. While the sole tribal beneficiary accounts for less of a tenth of that number, Undead Augur can be quite a force between feeders (Carrion Feeder and Silumgar Scavenger) on one side and fodder (Putrid Goblin plus Rank Officer) on the other.

Not counting changelings, Goblins are the second biggest tribe in Modern Horizons. 0.54 cards per pack are Goblins or make Goblins. 0.19 make more than one Goblin. 0.13 benefit from the presence of lots of Goblins.

None of them can compare to the hive. The average pack contains 0.66 Slivers:

0.54 Slivers per pack are accessible via red and white mana alone. Together with white and colorless changelings, there’s a solid chance to find an on-theme card for a straight two-colored Sliver deck in every pack. Because of changelings, black is most likely to act to supplement or to supplant one of these colors, blue least likely. Notably, white Slivers feature way more combat-relevant abilities than the red Slivers.

No Blocks, No Problems

Being a Ninja is less about the affiliation than about the skills, of course. It’s the polar opposite of being a Goblin. The way of the Ninja involves evading blockers and getting in for a little extra something via the backdoor.

0.368 cards per pack feature ninjutsu. 0.413 blue cards per pack offer evasion for 3 mana or less, and 0.297 black cards per pack do. Some of them, like Faerie Seer, come with additional benefits when used to enable ninjutsu. Overall, 0.434 blue creatures per pack have an ability that triggers upon entering the battlefield, and 0.471 black creatures do.

Exact numbers become somewhat murky beyond that, but further synergies exist. Some other creatures, like Watcher for Tomorrow, Putrid Goblin, or Venomous Changeling, may go unblocked early when there’s no profitable trade yet. Similarly, opponents might not want to trade away anything ever for an unearthed Dregscape Sliver or First-Sphere Gargantua.

Cards that benefit from the presence of snow permanents in general:

Cards that request or require the presence of snow lands in particular:

A minor theme is lands in graveyards. Only 0.281 cards per pack care about that. But there are major payoffs such as Murasa Behemoth or Igneous Elemental, and ways to get lands into your graveyard are plentiful:

Blink or You’ll Miss It

Another minor theme is exiling and returning creatures for fun and profit. Soulherder and Blizzard Strix each show up at a rate of 0.0375 copies per pack. Ephemerate, Settle Beyond Reality, and Astral Drift account for a combined 0.215 cards per pack.

Creatures with abilities that trigger when they enter or leave the battlefield exist in all five colors:

I didn’t count Martyr’s Soul because it only triggers off of rebounded Ephemerate and possibly Soulherder. Some of these effects are tiny (see Lavabelly Sliver) or conditional (see Munitions Expert) while some can be quite overpowered (see Deep Forest Hermit). Whether Ephemerate makes sense in a deck or not depends heavily on the quality of triggers. A much clearer conclusion concerns Settle Beyond Reality: it’s abundantly easy to get some value out of both modes, especially in a green deck.

Indeed, Settle’s second mode ties into green-white’s theme of caring about having had a creature enter the battlefield on any given turn. White offers Answered Prayers and Zhalfirin Decoy at a total of 0.137 cards per pack, green has Bellowing Elk and Saddled Rimestag going at the same rate.

They all benefit from Ephemerate or Settle Beyond Reality, but also from repeated creature creation, like Recruit the Worthy, Battle Screech, Mother Bear, Squirrel Nest, and Trumpeting Herd. Good-Fortune Unicorn is loosely connected here in that it prefers quantity over quality.

Drawing to a Close

0.137 blue cards per pack care about drawing more than one card per turn: Eyekite and Oneirophage. Red has 0.198 such cards per pack, split between Fists of Flame and Spinehorn Minotaur. Blue-red adds another 0.0375 per pack in Thundering Djinn.

This many cards per color can enable you to draw extra cards during your main phase:

Having creatures in your graveyard matters to 0.335 black cards per pack and to 0.054 green cards, including Genesis. In addition, there are 0.0375 copies of Rotwidow Pack. Winding Way, Glacial Revelation, and Ransack the Library add up to 0.236 cards per pack.

A booster contains 0.199 black and 0.099 red creatures that want to sacrifice some other creature. (Those that exclusively sacrifice fellow Goblins aren’t included here. They’re included in the tribal section.) 0.306 black cards provide fodder for several sacrifices, and 0.177 red cards do. 0.099 copies of Goatnap per pack can organize an alternative sacrificial lamb. 0.198 black cards per pack offer a reward whenever a creature dies, as do 0.0375 copies of Vengeful Devil.

There’s obviously cross-synergy between the two themes. 0.384 green cards per pack create multiple tokens to sacrifice, and sacrificing Genesis is cool too. Discarding Genesis to Mind Rake or Rank Officer works just as well, which in turn matters for the hellbent on Headless Specter.

There’s a lot of overlap all around, and still there are more themes:

Despite trying my best to make this exhaustive, I probably forgot something. If you find any omission or error, please leave a comment.