It turns out that 2-card combos that produce infinite mana are quite good in Modern. Seriously, when aren’t 2-card infinite combos wonderful? The Amonkhet card Vizier of Remedies, when paired up with Devoted Druid, goes hard on mana and is huge game. Obviously, you’ll need to have a sink for the unlimited mana, but generally speaking, it’s pretty easy to find something nice to do with unlimited mana!

As if a 2-card, infinite mana combo wasn’t good enough, Vizier also continues to facilitate the Viscera Seer + Kitchen Finks shenanigans that generate infinite life and scrys. Vizier slots into the already potent Abzan Company shell and simply adds another secondary combo. The deck is literally an assortment of cards that go infinite with one another whenever there are 2 or 3 in play at the same time! Vizier is single-handedly reshaping Modern! Well, maybe not single-handedly…

The glue that holds it all together.

It has a little help from a couple of truly awesome green creature combo helpers.

The deck is given insane consistency by its Company + Chord of Calling backbone. These cards make it fairly easy to find the right combinations of creatures quickly and end the game on the spot.

The deck is similar to a typical Abzan Company deck except that it splashes blue for a couple of key cards. The deck is another brainchild of the Ann Arbor players, in particular: Andrew Elenbogen, Harrison Fang, and Kyle Boggemes.

Spell Queller is a powerful Collected Company card because it grants Company the ability to also be a counterspell while adding pressure to the board. Spell Queller is also just an amazing Magic card in a general sense. It is the kind of card that I always want to play with but haven’t found the right deck for—until now. I love tempo, flash style decks! One with a bunch of infinite combos is also quite ideal…

One thing I’ve noticed playing traditional Abzan Company is there are limited ways to interact in the mirror (especially in game 1) and the player that hits a combo first is typically going to win the game without too much resistance. Queller gives you a way to interact not only with combo pieces from hitting the board, but also with the all important Collected Company.

Another thing I’ve noticed is that the presence of the combo in my deck tends to overload an opponent’s removal spells, which makes Queller even more potent. Devoted Druids and other potential combo cards become “must kill” creatures, which opens up the floodgates for Spell Queller to either protect a combo and win the game or just be a good value counterspell in the later turns that deals damage.

Spell Queller is also a huge hedge against some of the natural Abzan predators: 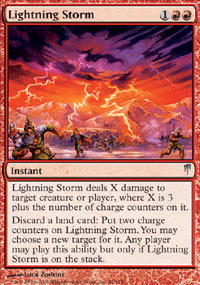 Spell Queller is a straight up counterspell + clock against unfair decks like Living End, Storm, or Ad Nauseum. It doesn’t counter Ad Nauseum directly but can hit cards to keep them in check long enough to win (or protect an Eidolon of Rhetoric). Obviously, Spell Queller really shines against opposing combo decks that are light on removal to begin with.

The deck also has a fair amount of instant speed threats (Collected Company, Chord of Calling, and Gavony Township), which means that holding up Spell Queller isn’t going to typically cost you your turn if an opponent doesn’t play a “must counter.”

Reflector Mage is a nice pick up as well. It serves a similar function to Fiend Hunter but is often much more efficient since an opponent can’t just kill the Fiend Hunter and get their creature back immediately. With Reflector Mage, the opponent will have to wait a full turn cycle to redeploy their clock or hate creature, which will often be too late against this combo deck.

The blue splash also provides some nice utility in the sideboard in the form of more permission for opposing unfair decks: 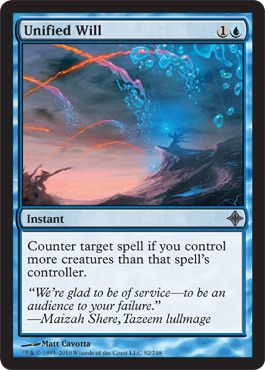 Thy will be done.

Most of the time, Unified Will is just a 2-mana hard counter in the matchups where you want to bring it in. Primarily, against unfair decks. Negate and Mana Leak are options, but I think Unified Will provides the most utility.

One thing it does that Negate cannot is counter Primeval Titan against Valakut decks, which is really important (since Spell Queller doesn’t stop Titan either). There is some tension between wanting to be careful not to board out too many creatures and make Company weak. But I’m a fan of sideboarding out Chord of Calling against combo decks for more counterspells. Chord is slow and you can typically defeat these decks by attacking and countering important spells. Don’t fall into the trap of bringing in a ton of noncreature spells and diluting your Companies!

The rest of the deck is pretty typical of an Abzan Company deck. The mana has been reworked to support the blue spells, but overall the idea is to have a combo deck that also has Quellers and sideboard permission to improve some of the weak matchups and gain an edge in the mirror.

Vizier is changing the world and any edge is huge!