After many years, we have another silver-bordered set!

Unstable will be released on December 8, featuring questionable science, unpredictable die rolls, and other high-variance nonsense. The cards can’t be used in regular tournaments, but they’re awesome for casual play… and for over-analytical mathematicians.

Today I will analyze the white, blue, and black cards that I found most interesting from a mathematical perspective, and next week I’ll return with the red, green, artifact, and multicolor cards. 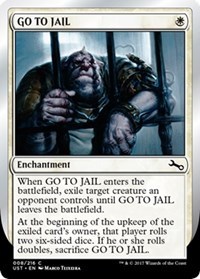 We start with a flavor win that doubles as a powerful removal spell in Limited. The first thing to note is that the probability of rolling doubles is simply 1/6. After all, the first roll doesn’t matter—whatever you roll with your first die, you have a 1/6 chance of getting the same number on your second roll.

But how likely is it for your creature to have broken out after X upkeep triggers? For questions like these, it’s usually easier to look at the opposite: The probability that your creature will still be in jail after X tries. This probability is given by 5/6 to the power X. Using this, the probability that you are no longer in jail after X tries is then 1 minus that number. Rounding to one decimal, this yields 16.7% after one try, 30.6% after two tries, 42.1% after three tries, 51.8% after four tries, and so on.

If you’re familiar with probability theory, then you may have recognized that this card’s process yields a nice example of a geometric distribution. Hence, the probability of breaking out on exactly the Xth try is described by 5/6 to the power X-1, multiplied by 1/6. In expectation, your opponent needs 6 tries to break out their creature. That’s good value for a single white mana. 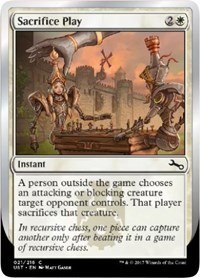 It’s a playable, albeit unreliable removal spell in Limited, but the flavor text really grabbed my attention.

Recursive chess seems like a strange game. Basically, if my bishop is trying to capture your rook, these two pieces would play a new game of chess (per the picture) in which the same rules apply. So you get a sequence of recursive calls, which is not necessarily a problem per se, except that this sequence is not guaranteed to terminate.

It is possible to checkmate the opponent in a game where no piece is captured, so there may be a way out, but it’s unclear to me whether my bishop and rook would choose that outcome. Another way the recursion might end is when (after a never-ending spiral of sub-games) all matter in the universe is converted to chess equipment. But that doesn’t sound great either.

Maybe the only winning move is not to play. Or maybe this article has an answer for us? 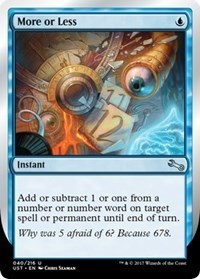 The flavor text is based on the stupid joke, “Why was 6 afraid of 7? Because 789!” Fortunately, you’re going to need a lot of copies of More or Less to correct the flavor text.

But what else can you do with this card? Well, one of my favorite uses would be to change the reminder text in Ashling’s Prerogative or Void Winnower, making it so that one is even and befuddling mathematicians all around the world.

In Unstable itself, I see the following silly options: 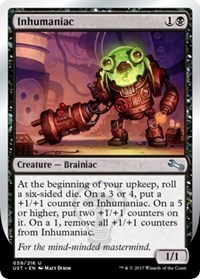 It’s a Markov chain! Am I the only one getting excited by this?!

Okay, I may have lost a majority of readers with the term “Markov chain,” but they are among the most valuable models in probability theory. Markov chains are supported by elegant theoretical results, enable useful analysis, and form the basis of many quantitative models of real-world processes. Example applications include queueing theory, Google’s PageRank algorithm, and supply chain management.

In simple terms, a Markov chain models a situation where you reside in a certain state at any point in time (which could be the number of customers in a queue if we’re modeling a supermarket’s cashier, or the current power/toughness if we’re looking at Inhumaniac) and where at certain moments (every upkeep, in Inhumaniac’s case) you jump from one state to another (that is, Inhumaniac’s power/toughness changes) according to pre-described probabilities.

Markov chains are based on a principle of “memorylessness.” For Inhumaniac, it means that where you go on the next upkeep depends only on your current power/toughness, not on the history of your power/toughness in previous turns. This simple assumption makes it possible to analyze the dynamics of the system over time in a convenient way.

Markov chains are often presented as a diagram, where circles represent states and arrows represent possible transitions. The numbers on the arrows describe the probability of changing from one state to another (or staying put).

Using the magic of Markov chains, we can then determine the probability distribution of Inhumaniac’s power/toughness as a function of time, assuming we start with a 1/1 creature.

The last row is arguably the most interesting one because it describes the long-term behavior. The distribution can be interpreted as the fraction of time that Inhumaniac has this power/toughness as the number of upkeep triggers tends to infinity. Another way to interpret it is to imagine you left Inhumaniac running for an infinite number of turns. Upon your long-awaited return to the game, the power/toughness you would observe is described by the probabilities in the last row.

To top it all off, Inhumaniac’s expected power/toughness after infinite triggers is 7. Exactly 7. The lucky number 7. This card is a thing of mathematical beauty. And given that its expected power is already over 3.5 after 3 upkeeps, it’s pretty powerful to boot! 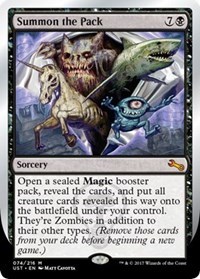 The obvious answer to the question, “Which booster pack is the best?” would be Legions. That set was filled with only creatures. No sorceries, no instants, not even a basic land—15 creatures in every booster. The set did include a lot of spell-like effects such as Gempalm Incinerator, but it was still a rather unusual design that R&D never repeated.

One downside to opening a Legions pack is that the set contains Phage the Untouchable. That’s somewhat of a liability. What if you’d prefer a less risky option and/or only have access to more recent booster packs?

Well, I ran the numbers on all expansion sets since the introduction of mythic rares, taking into account rarity distributions under the assumption that a non-Legions booster contains 10 commons, 1 basic land, 3 uncommons, and then 7/8 times a rare and 1/8 times a mythic in the final slot. Here are the results, sorted by expected combined power/toughness.

It was a bit of a surprise to me that Rise of the Eldrazi ranked low, as I figured that Ulamog’s Crusher and friends would lead to big numbers, but that set also had a lot of cheap level-up creatures like Caravan Escort at common, which lowered the set’s overall converted mana cost and power/toughness stats.

That said, Ixalan also did well, so just using a booster pack of the most recent black-bordered set would be quite reasonable too. To whet your appetite, here’s a sample pack.

With a total creature converted mana cost of 48 and a combined power/toughness of 79, this booster is way above average, but it’s a nice way to illustrate the power of Summon the Pack.

I can’t wait to see all of these Unstable cards in action!