Do you ever feel lucky? Do you ever wish that Magic relied more on chance elements? Do you feel that the more unlikely the victory, the more memorable the success? Well, then I have the perfect deck for you!

Ben Bryer was brave enough to register this deck for Grand Prix Seattle. Although he only went 2-6, the coverage team still found his deck interesting enough to do a Deck Tech video on his creation. I can’t blame them.

Ben’s build may not look perfect—Scalding Tarn and Volcanic Island would be better than Mana Confluence, and the 4 Plains in the sideboard don’take much sense to me either—but these are likely budget card choices. And more importantly, the deck looks like it would be a blast to play. 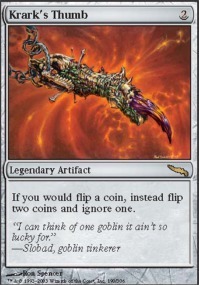 4 Krark’s Thumb are the heart of the deck. Without Krark’s Thumb, the probability of flipping heads or tails is obviously 50%. With Krark’s Thumb, you’ll flip 2 coins and choose one of the two outcomes. There are 4 possible outcomes in total, all of which occur with the same probability:

Let’s run the numbers on what Krark’s Thumb can do for the rest of the deck. 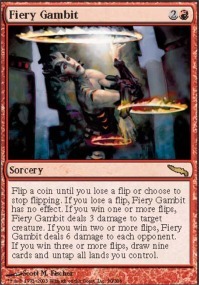 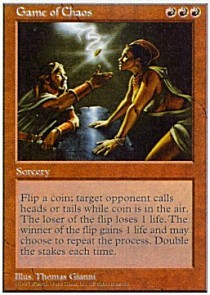 Since the stakes are doubled each time (it goes 1-2-4-8-16-32) you just need to win 6 coin flips in a row to win the game right away if your opponent starts at 20. Assuming that your opponent always chooses to stop the process if possible, the probability of an immediate win can be determined in a similar way as for Fiery Gambit.

Taking the sixth power of 0.5 or 0.75 reveals that the probability of an immediate win is 1.56% when you don’t have Krark’s Thumb in play and 17.80% when you do. The artifact makes a huge difference! 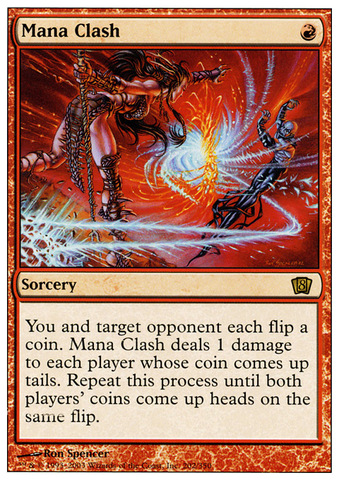 Now we get to the real fun. When you have Krark’s Thumb in play, you will flip your two coins at the same time as your opponent will flip theirs, and you get to see the result of all flips before you decide which of your two coins to ignore. This gives you a reasonable amount of control over the outcomes.

(It appears that this is not implemented correctly on Magic Online, by the way.)

The question I will tackle is as follows: How likely are you to win immediately with a Thumb-powered Mana Clash? Moreover, how likely is an immediate loss or draw? (Since state-based effects are not checked during resolution of Mana Clash, one of the two players is allowed to fall down to 0 life while the coin flipping continues. It is possible that both players are at a negative life total when both coins come up heads, in which case the game is a draw.)

You can think of the situation as a discrete-time, absorbing Markov chain. To me, that implies some nice, recreational math. The solutions and explanations are below.

These formulas can be easily implemented in four 21 x 21 spreadsheets to get numerical outcomes. The below table provides the percentage probability that the game will end in a win for you, depending on what the life totals of the two players are when Mana Clash is cast.

If you want the numerical outcomes for drawing, losing, or continuing, then you can find those in this Google spreadsheet.

Still not exactly a mark of consistency, so I don’t see this deck winning major tournaments anytime soon—but it’s a fine choice if you feel you need some more randomness in your life. Perhaps I’ll test my luck at an upcoming Legacy event…