Madcap Experiment is an awesome new card from Kaladesh to tinker with—and to run the math on.

The card reminds me of Shape Anew, save 2 differences. On the plus side, it doesn’t require you to sacrifice anything and cannot be countered by removal in response. On the other hand, it may deal a lot of damage to you.

These numbers are for the specific situation of casting Madcap Experiment on turn 4 on the play, i.e., in a 50-card deck. Since the decision on whether to even cast Madcap Experiment may depend on how many artifacts remain in your deck at that point, I opted to provide the probabilities as a function of the number of artifacts in your deck for that specific situation.

Besides the damage risk, it’s hard to get a huge mana advantage from Madcap Experiment, at least in Standard. After all, the most powerful artifacts in Standard, such as Skysovereign, Consul Flagship and Noxious Gearhulk, all cost 5 or 6 mana. While you might be able to set up a deck where Madcap Experiment deals just below 3 damage while yielding 5.5 mana worth of artifacts in expectation, this would require a deck with 20 expensive artifacts—a completely unreasonable mana curve.

To exploit Madcap Experiment, I think we need to turn to a larger card pool with more combo potential. Let’s enter Modern. 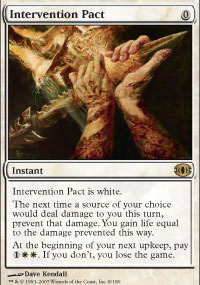 Two of the best ways to prevent Madcap Experiment from dealing any damage at all are Intervention Pact and Runed Halo. (Soulfire Grand Master is also strong but dies too easily to Lightning Bolt, and Burrenton Forge-Tender is worse than Runed Halo if you didn’t draw Madcap Experiment.)

Here is an example build:

Being forced to build this deck with Desperate Ritual instead of Pentad Prism isn’t ideal, but getting a Blightsteel Colossus on turn 3 while gaining a double-digit amount of life is pretty sweet.

This deck also has the perfect solution to the issue of drawing Intervention Pact without Madcap Experiment, or vice versa: Hive Mind! Either you can force your opponent to pay 1WW or lose the game, or you force them to flip over their deck and take damage equal to the size of their library. It’s a little awkward against Affinity, but you can’t beat everything.

An issue of this deck is that, for all the setup it requires, it is susceptible to Path to Exile. Blightsteel Colossus may not be ideal if the metagame is filled with clean answers. If that is the case, then you could consider Aetherflux Reservoir as a replacement, hoping to get lucky with Intervention Pact. But in a 60-card deck, that has a success ratio of less than 50%. It might work in a 240-card Battle of Wits deck, but I’ll leave that to the brewers who want to go really deep.

Another way to break Madcap Experiment, without requiring any Intervention Pact setup, is Platinum Emperion. Madcap Experiment puts the artifact in play first, so you won’t actually take any damage. You simply get an 8/8 with a powerful ability for 4 mana!

An early Platinum Emperion is nearly an auto-win versus damage-based decks like Suicide Zoo, Dredge, Merfolk, and Burn. It can also buy a lot of time against Jund, Bant Eldrazi, and other interactive decks until they’ve found a removal spell. It doesn’t do much against Inkmoth Nexus, but you can swap it for Platinum Angel after sideboard against Infect and Affinity if you expect them to cut removal spells.

So what might be a good home for this package? I think it can fit in TitanShift. Due to the mana ramp suite, this deck can reliably cast Madcap Experiment on turn 3, can realistically hard cast Platinum Emperion in the late game, and can use the time bought by Platinum Emperion to set up a Valakut kill.

The experiments have just begun. Where do you see Madcap Experiment?