Here’s the situation we found ourselves in, during a Battle for Zendikar booster draft:

This is a great scenario to get the series going again, mostly because there are a ton of very close options. That both means we should investigate all of the viable options and that no matter what we choose, there are valid reasons to go down the other paths.

The first thing to notice is how insane our hand is. Given the time and ability to cast our spells, there’s basically no way we lose this game. Grip, Ruin Processor, and Greenwarden already represent near-infinite exiling, life gain, and beef, and that’s without even factoring in the 2-3 cards that Painful Truths can draw later. Additionally, given that our opponent is red/white with two aggressive cards in play, it’s highly implausible that they are a better late-game deck. All that together means that I’ll be heavily biasing my decisions toward survival. 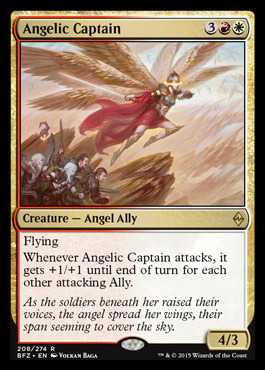 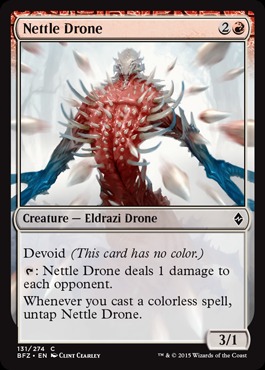 The main restriction here is mana. Our hand is chock-full of action, but we are on just four lands, with 2 one-shot mana sources in the Eldrazi Scions. We can play anything but Ruin Processor, it’s just the follow-up plays that become more difficult once we consume the Eldrazi Scions.

Immediately, we can rule out Ruin Processor and Painful Truths. Processor is uncastable, and it would be certifiably insane to cast Painful Truths here. Yes, you can hit a land drop, but spending a whole turn to take 2 damage and not advance the board unless you draw a land is one of the easiest ways to lose this game. As a side note, we can attack with Carrier Thrall to potentially get another Scion, but I’m going to assume the opponent won’t be blocking it regardless, and the 2 damage doesn’t matter a ton. The attack is good, but largely irrelevant to the rest of our decision-making.

The other three cards are each worth investigating. 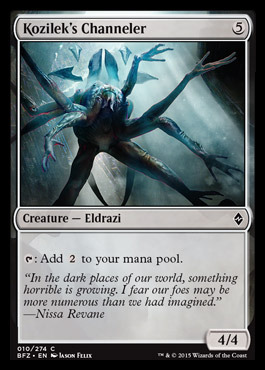 Casting Kozilek’s Channeler by sacrificing one Eldrazi Scion sets the rest of your hand up, and if it survives, solves all your mana problems nicely. The biggest problem I have with this line, and why I wouldn’t take it, is that it opens the door for you to lose this game. When you are as far ahead as you are here, plays that give your opponent a chance to steal the game are not advisable, and playing Channeler gives your opponent a shot at killing the Channeler and stranding you with a bunch of expensive spells in hand. If we were further behind here, Channeler could be a nice high-reward play, but given the circumstances I can’t advocate it. 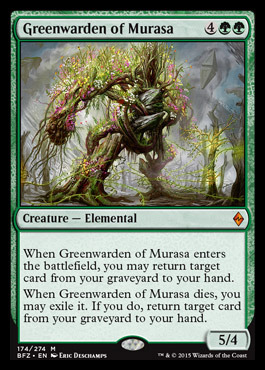 One very appealing play is to sacrifice both Scions to cast Greenwarden, which gets back Evolving Wilds. This way, you hit your land drop and potentially pick up a third color for Painful Truths (though note that you absolutely don’t need more info than what’s given to make a decision here. The contents of your deck can be assumed to be a normal 2-to-3-color deck and you will be fine). You also end up with a Greenwarden in play, which has a good amount of value by itself.

My main argument against playing Greenwarden is that it too opens the door for a loss. It brings you to 5 mana on your next turn, and if you miss drawing a land, means you can’t stop the Angel for multiple turns. Greenwarden into Channeler is very similar to playing Channeler with a turn delay, and giving the opponent an opportunity to hit a bunch of times with a big flier seems way too risky. I would not play the Greenwarden here. 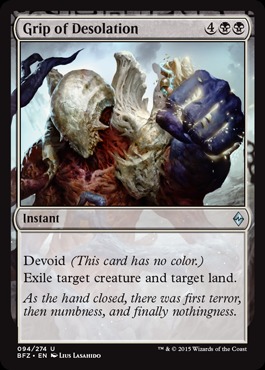 Grip is the opposite of the other two options. It sets you up the least well for following turns, because it puts you to zero Scions and doesn’t tap for mana or get lands back, but it also minimizes risk the best. By casting Grip on the Angel and a Mountain, you reduce the opponent’s clock to just a Nettle Drone (which isn’t even that great in red/white), and make it less likely they can cast something good on their next turn. As a bonus, you get to attack with everything but the Eyeless Watcher, and sacrifice Scions to Grip mid-combat if they get blocked. Next turn, if you draw a land, you can cast Channeler. If you don’t, Painful Truths should help find a land, and either way your life total is high enough to make use of all the insane cards in your hand.

Attack with Carrier Thrall and both Eldrazi Scions. Cast Grip of Desolation if either Scion is blocked (or after combat if they go unblocked), targeting Angelic Captain and Mountain.

This was an interesting scenario, with a number of viable options. Ultimately, I chose the option that mitigates the risk most because of how powerful our hand was, but change a few cards to less-powerful options and I could see going a different way.